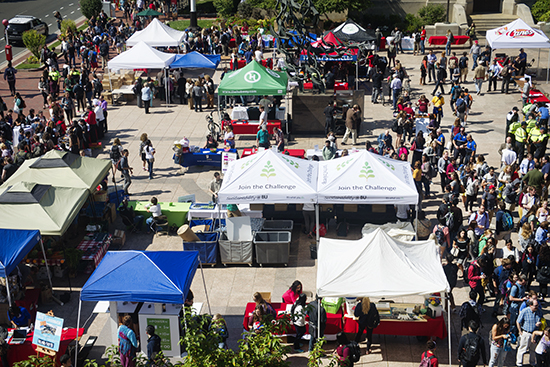 Boston University pledged yesterday to reduce its carbon emissions by 35 percent in four million square feet of building space by 2020, adding to the 35 percent reduction in carbon emissions it has already achieved in many existing facilities. The news came as two BU student leaders took part in the White House American Campuses Act on Climate day-of-action.

At a private roundtable discussion, sustainability@BU intern Lindsey Chew (Questrom’16) and student government president Andrew Cho (CAS’16) joined university presidents, White House and US Department of State officials, and other college students in brainstorming ways college campuses could promote sustainability and address climate change. The White House officials hope the talks will influence world leaders, who are set to convene later this month at the 2015 Paris Climate Conference (COP21). The 21st conference’s mission is to reach agreement on a plan that would reduce worldwide greenhouse gas emissions and avoid the storms, floods, droughts, and other catastrophes linked to global warming. The goal of the conferences is to keep warming below 2 degrees Celsius, or 3.6 degrees Fahrenheit, which many scientists say is the key number to keeping the crisis in check.

Chew says she was especially inspired after hearing from Environmental Protection Agency administrator Gina McCarthy. “McCarthy called on students to energize their communities with education and awareness efforts,” Chew says. “I appreciated her emphasis on immediate solutions, because we need to move past climate change as a political issue and act as quickly as possible.”

Cho, an environmental analysis and policy major who regularly tweets about BU’s sustainability efforts, says he wishes more students could have attended the event. “Students were by far the minority of the group,” he says. “I wanted to bring more attention to social engagement and the need to connect sustainable actions to healthy and fulfilling lifestyles.”

Other students from across the country were invited to tweet about the climate day-of-action using the hashtag #ActOnClimate. On campus, sustainability@BU hosted an hour-long discussion at BU Central to talk about climate change and then live-streamed a special conversation between McCarthy and YouTube star Emily Graslie.

Chew says that BU’s environmental efforts caught the attention of the White House after she and fellow sustainability@BU interns became involved in the University’s Chevrolet Campus Clean Energy Campaign last year. The automaker identified BU as a regional leader in clean energy and asked to buy some of its carbon credits to retire them permanently.

During the campaign, the sustainability@BU interns asked students to share, on a huge chalkboard in the George Sherman Union, the ways they could help BU reduce its emissions. They also spearheaded a social media campaign using the hashtag #CleanEnergyU. That campaign has been a big success and is still going strong: since October 2014, #CleanEnergyU has gained more than 23 million impressions on Twitter and hosted 7 tweet-a-thon Q&As with CEOs, mayors, authors, and executives from nonprofits like the Climate Group and the National Wildlife Federation and from businesses such as Google and Starbucks.

More than 200 colleges and universities signed a climate pledge at yesterday’s White House day-of-action. In addition to cutting carbon emissions, BU also committed to reducing energy consumption by 10 percent by 2017 and to supporting climate change research.

The University is especially committed to reducing carbon emissions, Chew says. Between 2006 and 2014, BU reduced its energy consumption by 4 percent and its greenhouse gas emissions by 25 percent, while at the same time increasing overall facilities’ size by 14 percent. This was achieved by reducing the University’s average energy use intensity (EUI) 16 percent through renovating heating plants, upgrading heating and cooling systems, recommissioning buildings, switching to cleaner burning fuels, the greening of the electrical grid, and replacing traditional lighting controls and lamps.

“We were pleased to be invited to this event and to have the opportunity to send students to participate,” says President Robert A. Brown, who was unable to attend the White House event. “We have demonstrated that it is possible to meet the energy needs of a growing and technologically sophisticated campus while significantly reducing carbon emissions and overall energy consumption. We are committed to continue these efforts by seeking energy efficiencies and moving to cleaner energy sources and a higher proportion of renewable sources.”

The text of the pledge, written by Dennis Carlberg, director of sustainability@BU, and signed by Brown, follows:

Building on our progress in reducing the University’s carbon footprint, creating new knowledge through climate-change research, and engaging our community in solutions, Boston University pledges to:

BU Talks Climate Action at the White House
1
share this