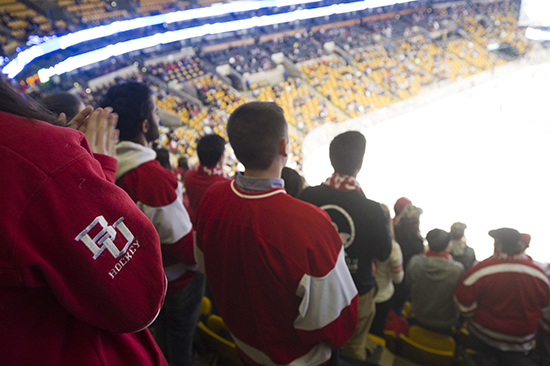 Those watching the game at the GSU Metcalf Ballroom or the Harp will probably have a better vantage point than those watching from the TD Garden nosebleeds. Photo by Cydney Scott

The Boston University men’s ice hockey team is heading back to TD Garden Saturday, April 11, where they will face Providence College in the Frozen Four final. A Terrier victory would earn the program their sixth NCAA championship (they last won their national title in 2009), and their first under head coach David Quinn (CAS’89).

Want to know where to go, how BU is celebrating, and what your chances are of getting tickets? Read on.

The Terriers play Providence on Saturday starting at 7:30 p.m. ESPN will provide live coverage. A Live audio broadcast of the  game will be available on GoTerriers.com.

Where to watch in the Boston area

Sadly, TD Garden game tickets are officially sold out. If you don’t already have one and weren’t among the lucky fans who won a chance to buy tickets in BU’s lottery, you can try StubHub and other websites, but they’re prohibitively expensive (starting at $300 and going up to $1,200 each).

The Dean of Students office is hosting a big watch party on Saturday in the George Sherman Union Metcalf Ballroom, starting at 7 p.m. Free food will be provided.

The BU Alumni Association and the Friends of BU Hockey will host a Frozen Four Pregame Gathering and Watch Party  Saturday at 5 p.m. at the Harp, the official BU meeting place throughout the Frozen Four. Admission is free, and there is a cash bar. RSVP here. The bar, at 85 Causeway St., is just steps from TD Garden.

Hockey fans can visit Causeway Street outside TD Garden on Saturday as part of the NCAA’s Frozen Fest, a free fan festival featuring interactive games, giveaways courtesy of the NCAA, and Frozen Four merchandise for sale, as well as music by local bands, food and drink, and appearances by local hockey personalities.

Heard of any other events celebrating BU hockey? Let us know in the Comment section below.

Where to Watch the NCAA Final

There is 1 comment on Where to Watch the NCAA Final