In the video above, learn about the life of a commander aboard the USS Constitution.

The tree trunks arrived at the Charlestown Navy Yard on July 7. White oak, 45 feet long, and weighing about 10,000 pounds, they had been trucked more than 1,000 miles, from a naval base in Crane, Ind., which maintains a woodland preserve with 150 mature trees that have been set aside for the restoration of the USS Constitution. Over the next two years, 35 such logs will be sawed into planking to replace much of the storied hull of the 218-year-old frigate commissioned by George Washington.

Sean D. Kearns (ENG’94), who was the commanding officer of the Constitution from July 2013 until this past August, says the ship’s original hull was its secret weapon of sorts. More than two feet thick and covered with copper to protect it from wood-borers like crustaceans, it could withstand blows from 18-pound iron cannonballs. The hull is the reason the undefeated warship is called Old Ironsides.

“Cannonballs would either stick in the side or they would bounce off,” says Kearns. “She could go into battle with her huge armament and dish out punishing fire and take a lot of punishment in return without being damaged.”

Today, he says, the ship’s most formidable enemies are the New England elements and Boston Harbor’s burrowing mollusks. For the past two years, it was Kearns’ job, among many other things, to keep their damage in check and to prepare the Constitution for the kind of restoration that’s done every 20 years or so. The commander is in charge of a crew of 2 officers and 76 sailors and is also the chief evangelist for the ship’s mission—to preserve, protect, and promote the Navy’s role in history through education, historic demonstrations, and public events. Kearns has given tours of the ship to retired astronaut Buzz Aldrin and Secretary of State John Kerry (Hon.’05) and has overseen the visits of about two million visitors. 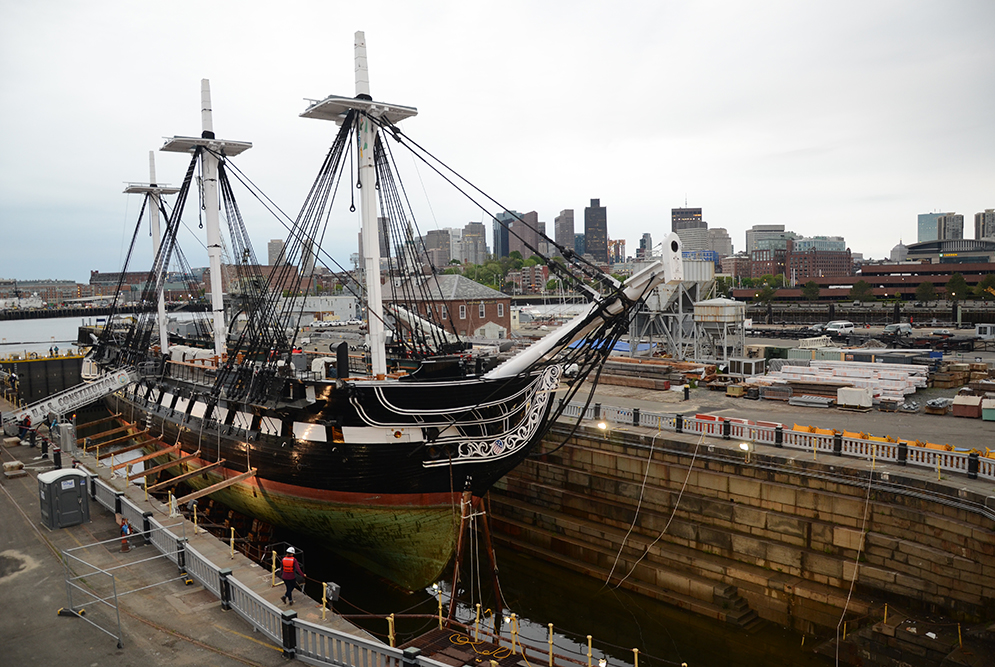 Every 20 years or so, the USS Constitution is hauled into dry dock for restoration. The current project will cost $12 million to $15 million.

“The Constitution is, in many aspects, the key historical symbol of the American Navy,” says Brendan McConville, a College of Arts & Sciences professor of history, who specializes in early American history. “Opposing navies couldn’t believe the Constitution could beat them in one-on-one combat. It became a potent symbol of American naval prowess.”

In May, after a two-month delay because of Boston’s record 2015 snowfall, Kearns directed the guidance of the ship into the Charlestown Navy Yard’s granite dry dock, where she will perch with an exposed hull and downed sails during the restoration. The $12 million to $15 million project will replace the lower hull planking and caulking, the copper sheathing, and some deck beams, rigging, upper masts, and yards (the horizontal spars, or beams, attached to the mast that sails are hung from). It will also inspect and restore the cutwater, or protruding curve of the ship’s bow.

Commander of the ship

On a muggy summer morning, Kearns, dressed in his blue camouflage Navy Working Uniform, crosses the gangplank and is greeted, as required by naval custom, with four bells and one last bell, called a stinger, signifying his rank of commanding officer of the ship. For Kearns, the Constitution is a special place: his naval career began more than 20 years ago with a commissioning ceremony on the historic ship.

Kearns grew up near Bangor, Maine, and he can remember family trips to Boston, where many afternoons were spent visiting the frigate. Enamored, he started building Constitution models and plastered his bedroom walls with photographs of the ship.

After high school, Kearns enlisted in the Navy as an electronics technician in the nuclear propulsion program, then studied mechanical engineering at BU on a Naval ROTC scholarship. His ROTC class’ commissioning ceremony was held on the deck of the Constitution, as is still tradition today.

With two master’s degrees from MIT, one in naval architecture and marine engineering and one in mechanical engineering, Kearns served on ships during Operations Iraqi Freedom and Enduring Freedom and was later promoted to executive officer of the USS San Antonio. When he took over in 2013, he became the 73rd commander of the Constitution. “When my family found out I’d gotten this job, they said, ‘You have got to be kidding me,’” he says. “They knew how much I love this ship.” He was married on the Constitution last summer.

Descending to the ship’s airless lower decks, Kearns offers up an impromptu history lesson: after the Revolutionary War, the newly formed United States was deep in debt, mainly to France, which had loaned the revolting colonists upwards of $70 million to fund the almost eight-year-long war. “We sold off our Continental Navy,” he says, “and that money was used to pay the interest toward our debt.”

At the same time, we continued trading with various European powers, some of which were warring with one another. The commerce was resented, so our ships were harassed by Britain and France. Worse, our merchant ships were being attacked by North Africa’s Barbary pirates. It was clear that America needed a naval defense force, and in 1794 President George Washington signed the Naval Act, authorizing $600,000 for the construction of six medium-sized warships, or frigates. These vessels, it was hoped, would keep the sea-lanes open for commerce and defend against pirates.

Official naval constructor Joshua Humphreys knew that the six frigates he was commissioned to build—the Constitution, the USS Chesapeake, the USS President, the USS United States, the USS Congress, and the USS Constellation—would go up against the world’s most formidable navies, so he set out to make the ships the fastest, strongest, and most heavily armed frigates on the water.

“We were never going to be able to go against them in large force,” says Kearns. “But one-on-one, Humphreys’ vision was the American ships could either beat or escape the British ships. So it was the outrun or outgun approach to the design that he took.” Years later, the Constitution would ply the waters off the coast of Africa in an effort to thwart slave traders.

The Constitution could reach speeds of 13 knots, or 15 miles an hour, much faster than most ships her size.

Humphreys’ design called for a bluff bow (flattened front) and a narrow, long hull for speed, matched with an acre’s worth of sails on her three masts. The Constitution could reach speeds of 13 knots, or 15 miles an hour, much faster than most ships her size. That’s the outrun. The outgun is visible on both the ship’s spar deck, where she carried 2 dozen 32-pound carronade cannons, and her gun deck, with its 30 long guns, each weighing 6,000 pounds.

While the Constitution was designed to deliver punishing blows, Humphreys wanted to guarantee that she wouldn’t be crippled by them. He designed a hull that is layered like a sandwich, three planks thick, with an exterior plank of white oak, then dense live oak framing, or ribs, spaced close together, and an interior layer of white oak. Humphreys insisted on live oak, which is far more dense than the white oak that framed most warships.

Today, the ship’s keel, or backbone, is one of the few original structural pieces. It was made from four pieces of white oak that were harvested from New Jersey in 1795. Diagonal riders helped the keel resist hogging, or bending upwards. 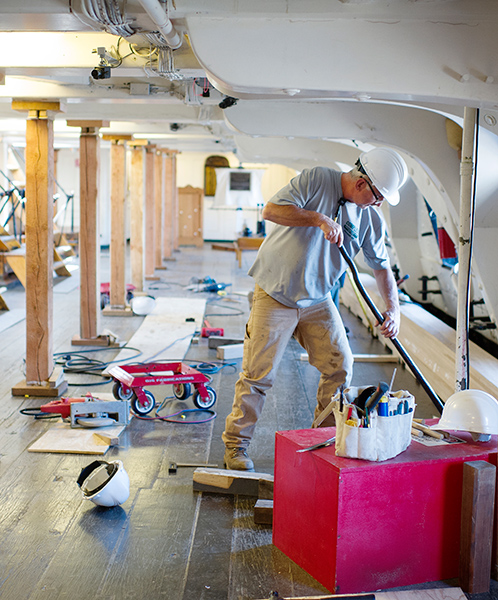 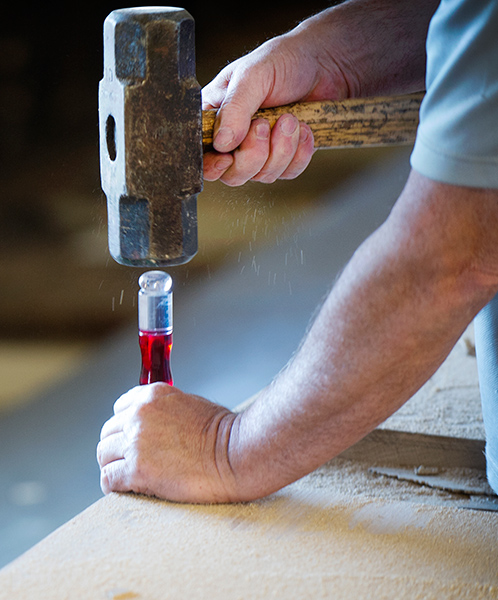 Work is done to the ship’s waterway, or gutter at the edge of the deck.

The British had been using copper to spare the hulls of English ships from marine wood-borers, and Humphreys wanted his ships to have the same protection. But copper was not yet being produced on a large scale in the United States. It was silversmith Paul Revere who managed to acquire English sheet copper for the ships through the foundry he owned.

The Constitution was launched October 21, 1797, from the site of the present-day Constitution Wharf and the US Coast Guard base in Boston. She was 305 feet long and 220 feet tall, and she set sail with a crew of more than 450 officers, sailors, and marines.

Humphreys’ six frigates, with their many guns, could not only destroy enemy vessels by blowing a hole in a ship, but could also render them immobile by damaging the rigging and sails, a far more desirable outcome. Contrary to the narrative of Pirates of the Caribbean, Kearns says, no one really wanted to sink a valuable instrument of war. The goal was to capture, repair, and then raise your own flag on an enemy’s ship.

Soon the US frigates were the envy of rival navies. During the War of 1812, the Constitution stunned the British by capturing the HMS Guerriere, one of the British Royal Navy’s most feared warships. It was in that battle that an American sailor, seeing that the Guerriere’s cannonballs could not penetrate the Constitution’s sides, reportedly cried, “Huzzah! Her sides are made of iron!” A nickname was born. Old Ironsides defeated four British warships in the War of 1812; after its HMS Java was defeated, the Royal Navy was ordered not to engage in one-on-one combat with her.

An American sailor, seeing that the Guerriere’s cannonballs could not penetrate the Constitution’s sides, reportedly cried, “Huzzah! Her sides are made of iron!”

In her 57 years of active service, the undefeated Constitution captured 33 vessels. The names of the commanders who led her throughout history are inscribed on a plaque on the gun deck; Kearns’ name is 73rd. “It’s really not a stretch to say at the time [they were built], the frigates project was as ambitious as it was in the 1960s when we put a man on the moon,” Kearns says. “When these frigates were launched, they were the most technologically advanced war machines on the planet. The level of craftsmanship that put together this boat by hand over 200 years ago is something that’s rare to find in our era of modern fabrication and shipbuilding.”

The Constitution would sail around the world before becoming a Navy training ship during the Civil War, and later a floating office ship. Before the ship was retired from active duty, Kearns says, its logs were filled with daily reports of the frigate’s carpenters checking for leaks or damage and repairing the sails, masts, and rigging.

Her most significant restoration was done from 1927 to 1931. At that time, the ship was in such poor repair that it was in danger of sinking at the pier. US schoolchildren raised $154,000 in a “pennies campaign” to restore nearly 85 percent of the old wooden ship.

The last time the Constitution sat in dry dock was from 1992 to 1996, and the next year, in celebration of her 200th anniversary, she sailed for the first time in 116 years. She next sailed briefly in August 2012, to commemorate the 200th anniversary of the War of 1812 and her battle with the Guerriere. Kearns says all renovations going forward are aimed at returning the ship to the way she appeared during the War of 1812, when she was at her peak.

Kearns will no longer be at the ship’s helm by the time the Constitution’s restoration work is complete, as he was recently reassigned as executive officer of the newly built USS Michael Monsoor. But looking up at the towering vessel in dry dock that summer day, he talks about the ship he loves. “Down here you get a better appreciation of how big the ship is,” he says. “When you’re on it, it doesn’t seem as big. I come down here whenever I can, like a kid in a candy store.”

A version of this story will appear in the fall issue of Bostonia magazine, which will be published next month.

There are 5 comments on Constitutional Amendments