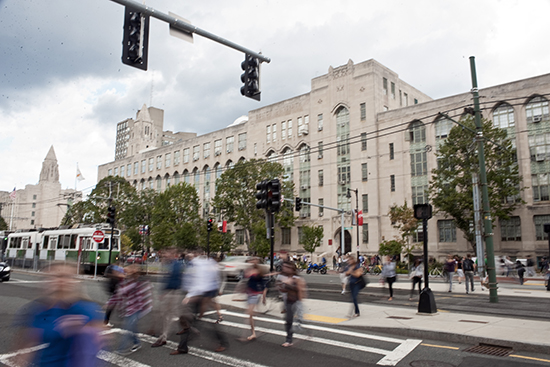 The University is the 32nd best in the world, according to just-released rankings from U.S. News & World Report. Photo by Robert Dolan

BU jumped five spots in the latest ranking of the best “global universities” by U.S. News & World Report, rising to 32 from last year’s 37.

It is the magazine’s second annual compilation in this category, and it “affirms how competitive we continue to be among the world’s premier research universities,” says Jean Morrison, University provost and chief academic officer. She credits “the outstanding efforts of our faculty, whose research and scholarship are yielding important new knowledge and practical discoveries that positively impact quality of life. We are extremely proud of their work and excited to continue building on this success in the years ahead.”

BU President Robert A. Brown called BU’s move up the rankings “gratifying, as it is always better to go up than down in these evaluations. The methodology for this particular ranking relies significantly on information about faculty research productivity and impact. It’s great that our emergence as a major research university is increasingly evident and recognized. And it is a wonderful confirmation that the extraordinary work of our faculty is being recognized around the world.”

U.S. News says that it launched this ranking, which includes 750 schools from 57 countries (up from last year’s 500 schools in 49 countries), in view of the many students opting to attend college abroad. The magazine considered a dozen factors in measuring the schools’ “academic research performance” and “global and regional reputations.” Among the criteria were publications and books, citations of faculty research, collaboration with international peers, and number of PhDs awarded by the institution.

In compiling the rankings, the publication relied in part on analytics from ThomsonReuters, a multinational firm researching and assessing scholarship and its worldwide influence.

Last month, U.S. News ranked BU 41st on its list of the 50 top US universities.

There are 11 comments on BU Is World’s 32nd-Best University, Says U.S. News