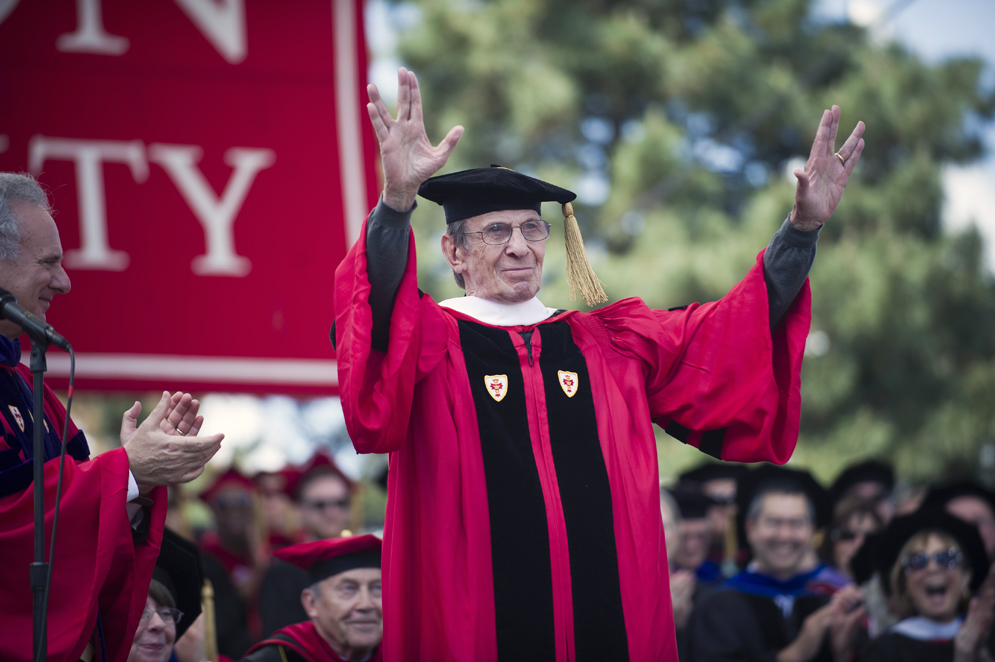 Leonard Nimoy flashes the crowd a Vulcan salute after receiving a Doctor of Humane Letters degree at BU’s 139th Commencement ceremony on May 20, 2012. Nimoy died on Friday, February 27, at 83. Photo by Cydney Scott

When Star Trek icon Leonard Nimoy came to Boston University in 2012 to receive an honorary Doctor of Humane Letters at the University’s 139th Commencement, he gave the Convocation address to the College of Fine Arts graduates. “You are the creators and curators of your own lives,” he told them. “Give us the best of your art. We crave it, we hunger for it.” Then, with the salute, translated from Vulcan and embedded in the hearts and minds of a generation—“Live long and prosper”—the Renaissance man, whose name will forever be synonymous with the pointy-eared Mr. Spock, propelled the adoring crowd to its feet. The Boston native and longtime friend of BU died of chronic obstructive pulmonary disease on February 27 at his home in Los Angeles. He was 83.

Nimoy (Hon.’12), whose papers are in the permanent collection of BU’s Howard Gotlieb Archival Research Center (HGARC), was a three-time Emmy Award nominee for his role as Mr. Spock. But he was also an accomplished poet, photographer, and author of two autobiographies, with the mirror-image titles I Am Not Spock (1977) and I Am Spock (1995). An actor since the age of eight, Nimoy had his own method acting studio when he was tapped for the Star Trek role in the 1960s. He visited campus in May 2011 as part of the Friends of the Libraries of BU Speaker Series.

In an interview with BU Today before the event, Nimoy had this to say about a career of being joined at the hip with Spock: “Star Trek is ancient history. When I was doing that show, we had no way of knowing how long it would be on the air, and we were always marginal in the ratings, always in danger of being canceled. I felt strongly that we were doing strong material; the ideas and themes of that show were relevant for so many people in their daily lives. I was so happy to be in that show because I think it had social relevance. I think finally that’s why the show endured.” Although it spawned a cult-like international subculture of Trekkies in syndicated reruns, an animated series, and 12 feature films garnering 15 Academy Award nominations, the original television series was doomed by low ratings to run for just three seasons after its 1966 premiere.

Nimoy “was a prince of a man,” says Vita Paladino, director of HGARC, which has a set of Spock ears among many other items of Nimoy memorabilia. “He had a very deep humanity, was a gentle soul and very humble, with a generosity of spirit,” Paladino (MET’79, SSW’93) says. “He loved to engage young people and mentor people. He knew he was very lucky to fall into the jobs he got.”

“Leonard Nimoy was an extraordinary human being, full of generosity,” says Benjamin Juárez, dean of CFA. “He always had time to listen and touch lives. With interests in many artistic fields and the sciences, his creative process always brought together rigor and spontaneity. It was truly a gift to know him and to see his art continually inspire generations. The common denominator of his artistic legacy is that he brought together all that makes us human.”

Nimoy would often speak of how he crafted the level-headed personality of the cerebral Spock, who let his hair down, so to speak, only after being exposed to aphrodisiac spores on the planet Omicron Ceti III, an effect that wears off, leaving spurned heartsick earthling Leila Kalomi (Jill Ireland). One of his passions was photography, which led to major exhibitions and books, including Shekkhina in 2002, and The Full Body Project in 2007, portraits of full-bodied women, some involved in the “fat acceptance” movement. “The average American woman,” Nimoy wrote, “weighs 25 percent more than the models selling the clothes. There is a huge industry built up around selling women ways to get their bodies closer to the fantasy ideal. Pills, diets, surgery, workout programs….The message is ‘You don’t look right. If you buy our product, you can get there.’”

Of his photographic style and inspiration, Nimoy, first captivated by photography as teenager, told BU Today: “One of my first photographs was a photo I took of my grandfather on the banks of the Charles River in 1944. I used to be busy with darkroom work and developing my own prints, but now I’ve turned to digital photography since it has gotten so much better. My work is conceptual—by that I mean I don’t carry cameras. Rather, I wait until something intrigues me and I want to photograph something.”

Nimoy was born in Boston on March 26, 1931, to Ukrainian immigrants who were Orthodox Jews, a heritage he reembraced in the early 1990s, when he published Jewish-themed photographs and produced and starred in the television movie Never Forget, about a Holocaust survivor. Boston’s West End, his old neighborhood, no longer exists, having been torn down to make way for Government Center and the surrounding sprawl of high-rises. “You know that sign on Storrow Drive that said, ‘If you lived here, you’d be home now?’ Right over there, near the Elizabeth Peabody Playhouse, that’s the area where I grew up, Chambers Street, St. Joseph’s Church,” he said in the BU Today interview.

In 1949 Nimoy left Boston for Hollywood and was cast in a series of long forgotten movies, as well as in minor television roles. After serving in the US Army for two years, he returned to Hollywood and more prominent roles. Before landing those roles, Nimoy paid his way through acting school in his mid-30s working as a soda jerk and taxi driver. He recalled those years in his address to the 2012 CFA grads: “One day I picked up future president Jack Kennedy at the Bel Air Hotel. We chatted about careers, politics, and show business…Kennedy said, ‘Lots of competition in your business, just like mine.’ And then he gave me this: ‘There’s always room for one more good one.’ Words to live by, and I tried to do that.”

In video above, Leonard Nimoy (Hon.’12) gives the Convocation address to the College of Fine Arts Class of 2012. Video by BU Productions