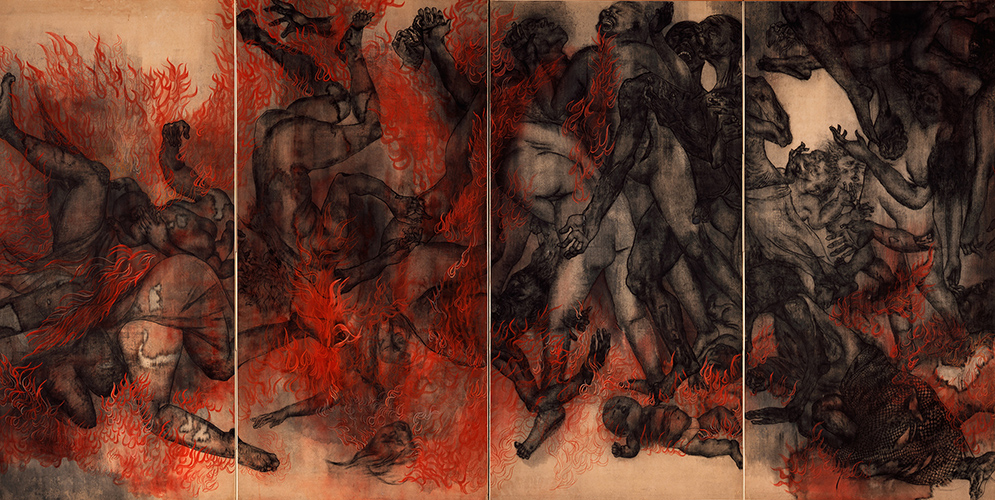 Iri and Toshi Maruki were a young married couple living in Tokyo in August 1945, when American forces dropped two atomic bombs on Japan, the first on the city of Hiroshima, killing more than 100,000 people and ushering in the nuclear age, the second three days later on Nagasaki, with tens of thousands more killed. Just days after the bombings, the couple went to Hiroshima, Iri’s birthplace. The family home, its windows blown out, had been converted into a makeshift hospital. Over the following weeks, they helped to care for injured civilians and cremate the dead.

Both were professional painters, Iri working in a traditional style of Japanese monochromatic ink painting called suiboku, and Toshi, trained in Western-style oil painting, working primarily as a book illustrator. For years, they wrestled with what they had seen in Hiroshima: piles of dead bodies, dismembered limbs, survivors burned beyond recognition. But eventually, they felt compelled to commemorate the bombings; at the time, there were no photographs, no film, nothing that visually documented what had taken place.

In 1950, they completed the first of what would become a series of 15 monumental panels—each 6 feet high and 24 feet long—graphically depicting the suffering and trauma.

Now, six of those panels are on display in an exhibition marking the 70th anniversary of the bombings. A Call for Peace: Iri and Toshi Maruki’s Hiroshima Panels & Artifacts from the Bombings of Hiroshima and Nagasaki, is at the Stone Gallery through October 18. The panels, on loan from the Maruki Gallery for the Hiroshima Panels, are being shown along with more than two dozen artifacts recovered near the epicenter of the blasts in both cities. The artifacts, many belonging to children who perished, are on loan from the Hiroshima Peace Memorial Museum.

“There was a time after the bombing when no one could talk about it,” later recalled Iri Maruki, who died in 1995. “This couldn’t be so, I thought. I had seen something terrible….It was still unsettled, unresolved, and we couldn’t leave it that way.” Iri Maruki and Toshi Maruki, who died in 2000, were nominated for the Nobel Peace Prize in 1995.

Despite the grim subject matter, the artists have depicted the victims with a grandeur and dignity.

“You see this horror, but it’s not grotesque,” says Joshua Buckno (GRS’05, Questrom’14), managing director of Boston University Art Galleries. “It’s not so much shocking as it is beautifully depicting a horrible atrocity.”

When the Marukis began their project, in 1948, they envisioned just one panel—a “procession of ghosts.” After the blast, many survivors held their arms out straight to try to alleviate the excruciating pain of the burns, so they sketched themselves posed as they’d seen the dead and injured. In preparing for that first panel, Ghosts I, they asked others to pose as well, making approximately 900 sketches.

Completed in 1950, the panel shows a nightmarish scene: ghost-like figures, many with blisters peeling, others with charred faces, bodies piled in heaps, some nothing more than skeletons. When the panel was exhibited that year at the Tokyo Metropolitan Museum, an elderly man who had lost his daughter and six-year-old grandson in the blast approached Toshi and urged her to continue painting about Hiroshima. That chance encounter led the Marukis to reconceive the project. Over the next 30 years, they would return to the subject of Hiroshima—and later Nagasaki—again and again.

Two of the panels in the exhibition recall little-known facts about the Hiroshima blast. Death of the American Prisoners of War, completed in 1971, is an homage to the 23 American POWs who had been crew members on B-29 bombers shot down by the Japanese. Those who weren’t killed instantly by the atomic bomb were tortured to death by citizens, urged on by police. The panel is noticeably more abstract: mutilated limbs are flung into space, the bodies of the POWs twisted into harrowing contortions among images of Caucasian women, naked or partially clothed. (There had been erroneous reports at the time that some of the POWs were women.)

Similarly, Crows, painted a year later, is the story of the forced laborers from Korea who had been drafted to work in the city and were left on the streets to die after the bombing. They received medical attention only after the Japanese had been cared for and buried. “Even in death,” the Marukis noted, “the Koreans were discriminated against.”

Other panels in the exhibition show the ways the bombings played out years later and the ways they changed life in Japan. Petition X, completed in 1955, recalls a movement started by Tokyo housewives to collect signatures to protest nuclear weapons testing. In the panel, a long line of civilians from all walks of life stand patiently in line to sign the petition. In the accompanying text, the artists note that “for the first time, the people of Japan asserted themselves with a silent cry—a voice that echoed through the land—a call for peace.”

Floating Lanterns (1969), the first panel the Marukis completed after a decadelong break in the project, commemorates the anniversary of the bombing. Each year crowds gather to float paper lanterns down the seven rivers of Hiroshima to symbolize those killed. This panel is far more stylistically abstract than the others. The floating lanterns, rendered as brightly colored cubes, offer a sense of hope and light not seen in the other panels. And the image of a young woman holding a lantern, a dove nearby—a symbol of peace—suggests a change in tone in the Marukis’ work.

The Hiroshima panels reflect an intense collaboration between two artists with completely different styles and temperaments. The project caused friction between husband and wife as they tried to convey their separate vision.

“Sometimes Toshi would paint a figure and Iri would say, ‘No, no, no, it’s too clear,’ and he’d take ink and just dump it on the figure Toshi had just painted,” says BU Art Galleries graduate assistant Alex Ciesielski (GRS’16). “And she’d say, ‘What did you just do?’ He’d wipe away the ink and she would see what he’d done and say, ‘Oh, you’re right.’ It happened the other way, too.”

As powerful as the Marukis’ Hiroshima panels are, the artifacts gathered from the bombing sites pack the most emotion. Among them is a shredded tunic belonging to 12-year-old Tetsuo Kitabayashi, whose father desperately searched for him after the blast, twice passing the boy without recognizing him because his burns were so severe. Tetsuo died a day later. “No words can describe my anger and sorrow,” his father later wrote.

“A Call for Peace expresses the ultimate goal of both of our collaborating institutions and of our exhibition—to present an artistic expression of the horrors of war so that we never forget the human stories of Hiroshima and Nagasaki, the universal stories of suffering that are those most impactful appeals for peace in this world,” says Buckno.

A Call for Peace: Iri and Toshi Maruki’s Hiroshima Panels & Artifacts from the Bombings of Hiroshima and Nagasaki is at the Stone Gallery, 855 Commonwealth Ave., through Sunday, October 18. The gallery is open Tuesday through Friday from 10 a.m. to 5 p.m. and Saturday and Sunday from 1 to 5 p.m. The exhibition is free and open to the public.

The Academy Award–nominated 1986 documentary Hellfire: A Journey from Hiroshima, which chronicles Iri and Toshi Maruki’s Hiroshima project, will be shown today, Tuesday, October 6, at 4 p.m., at the College of General Studies, Room 501, 871 Comm Ave, followed by a panel discussion with Thomas Berger, a College of Arts & Sciences and Frederick S. Pardee School of Global Studies professor of international relations, and Alice Tseng, a CAS associate professor of art and architecture. The event, sponsored by the Frederick S. Pardee School of Global Studies and the BU Center for the Study of Asia, is free and open to the public.

On Thursday, October 8, the Stone Gallery will host a movement-sound performance at 6 p.m., free and open to the public, by performance artist Sara June and sound artist Max Lord, who will perform their original piece, “Peacock,” presented as an homage to the Marukis’ lifelong efforts at waging peace.

Stone Gallery Exhibition Recalls the Horrors of Hiroshima
6
share this