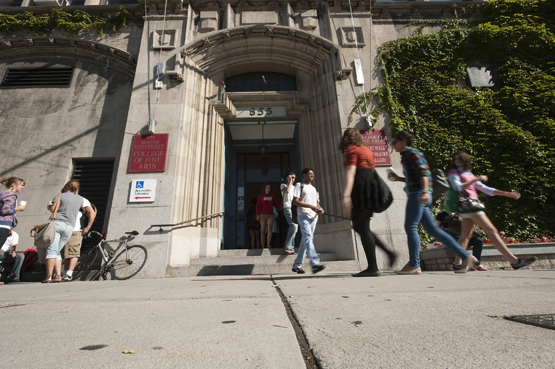 With the planned sale of the BU Theatre, the University has launched plans for a new production-design studio and black box theater on the Charles River campus near the College of Fine Arts building (above), to be completed by fall 2017. Photo by Kalman Zabarsky

In the wake of the University’s decision to sell the Boston University Theatre and end its partnership with the Huntington Theatre Company, the University and the College of Fine Arts are underscoring BU’s commitment to completing a new production and design facility and black box theater on the Charles River Campus by fall 2017. Students in the production and design program currently create scenery, props, and costumes in buildings adjoining the theater, which will be included in the sale. As plans for new facilities move forward, CFA will continue to stage the types of large and small productions traditionally performed at the BU Theatre main stage and at its Lane-Comley Studio 210 through the end of the 2017 spring semester. The theater will remain the home of the Huntington at least until the building’s sale.

“While we acknowledge that this is a bold step, it’s a necessary one in paving the way for the School of Theatre’s long-held dream of unifying its programs close to CFA and onto Commonwealth Avenue,” says Lynne Allen, CFA dean ad interim.

“We want to be clear about our commitment to the School of Theatre and the production and design program in particular: our goal is to have the new facilities ready to go in fall 2017 so that the program and students will have what they need,” says Jean Morrison, University provost and chief academic officer.

Morrison says that while the University has no plans to build a new proscenium theater, its fully staged operas, musicals, and other major shows will be performed at proscenium stages around Boston through rental agreements similar to those of the School of Music’s biannual performances at Boston’s Symphony Hall. The new Charles River Campus facilities will be built in the vicinity of the CFA buildings at 808 and 855 Comm Ave.

The BU Theatre, which dates back to 1925, “has been an important and vibrant fabric of our theater community for the last several decades,” says Allen, “but we are confident that the steps the University is taking to unify CFA’s academic programs onto the main campus will create enormous opportunities to better serve our students in their learning.”

Jim Petosa, director of the School of Theatre, says the school anticipates with excitement the new venue on the Charles River Campus.

“The impact on our productions and the unification of the school that will result is exciting to us all,” says Petosa, who is also artistic director of the New Repertory Theatre in Watertown, Mass. “The decay of the existing buildings on Huntington Avenue has been daunting for many years, and the inadequacies of the facilities to serve all of its ends have made the status quo undesirable for all. We certainly look forward to the unfolding of plans that ensure the quality of our programs, including continued association with our friends at the Huntington Theatre Company.”

CFA Opera Institute artistic director William Lumpkin, a CFA associate professor of music, hails the decision as “a major step forward for our program, one that invites new and innovative approaches to the training of opera students and the performance of opera as a whole.” Noting that students and instructors have a nostalgic attachment to the BU Theatre, where CFA has staged sumptuous, professional-quality performances of the great works of Mozart, Puccini, and more contemporary composers, Lumpkin says the change is a welcome creative challenge. “Perhaps it is opportunities such as these that allow us to focus our creative energies toward dynamic and progressive reforms in both the training and performance of opera,” he says.

Morrison says the University is committed to supporting CFA’s theater arts programs, students, and faculty during the transition. “The new spaces will provide our students with high-quality creative environments,” she says, “and enrich and enliven their experience at BU.”

In a statement posted on the CFA website, Allen says that she has heard from many students and faculty about the University’s decision to sell the BU Theatre, and she hopes that the discussion will continue.

“The conversation goes beyond space and is about the opportunity, academically and artistically, that comes with this change of venue,” she writes. “I look forward to leading these conversations as we work toward plans for the new space.”