Christopher Conz (GRS’13,’17) cuts a conspicuous figure as he pads along the tracks connecting the mountain villages of tiny, landlocked Lesotho. Tall, pale, and bearded, in windproof zip-up and cargo pants, he pauses to speak with cattle herders and market women in the singsong rhythms and clicks of their local language, Sesotho. The country has become a second home for the Springfield, Mass., native, a Boston University doctoral candidate in history.

As a Peace Corps volunteer from 2007 to 2009, Conz lived with a host family and taught at a village school. In fall 2014, he returned on a 10-month Fulbright Student Grant. His former host family welcomed him warmly and he moved back into their home. He is there doing the legwork, often literally, for a project titled Acquiring Environmental Knowledge: Interactions and Inequalities in Lesotho, 1880–1960s. The title may elude a nonhistorian, but Conz’s scholarship reflects a universal human theme: the push and pull of knowledge as people balance long-term land use with survival. How, Conz wants to know, is environmental knowledge formed, passed along, and reconfigured over time? He “is looking closely at this one small place in Africa to learn, in the transfer of formal agricultural knowledge, how the local folks filter out what’s been told to them, and the human side of who is listening to what,” says James McCann, a BU professor of history and associate director for development at the University’s African Studies Center. “It’s about knowledge passing between different cultural groups—some with power and some without,” says McCann, who is also Conz’s dissertation advisor. 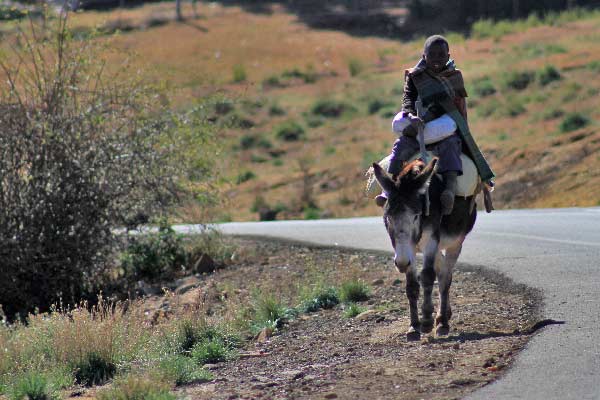 
A horse falls though it has four legs.

Since the arrival of the horse in Lesotho in the 19th century, the Basotho people have bred them for mountainous travel. This proverb recognizes that even the sure-footed are vulnerable to mistakes.

As they do all over Africa, social and economic contradictions abound in seemingly bucolic Lesotho (pronounced Le-SOOH-too). Nearly 5,000 feet above sea level at its lowest point and referred to by its official tourism site as “southern Africa’s answer to Nepal,” the largely rural country has a tranquil, Shangri-la feel, with donkeys and horses the preferred all-terrain vehicles crisscrossing its rocky slopes. Traditionally a culture of cattle herders, Lesotho occupies an area slightly larger than Maryland, with about one-third of that state’s population, its rural communities organized around family lineages and loyalties to local chieftains. But in the last year, Lesotho has been rocked by high-profile political assassinations, and it suffers the third-highest HIV rate among adults worldwide. Conz himself has attended an unrelenting succession of funerals, including a recent one for his host sister.

Through interviews, observation, and archival research, Conz hopes to address the following: How did the Basotho (as the people of Lesotho are called) develop and apply environmental knowledge? How has the exchange of goods and services with South Africa affected his village’s socio-environmental history? And in what ways has rural Lesotho’s high altitude and difficult terrain distinguished its development from other rural places in southern Africa? “Chris was able to create a narrative by speaking with people about the nature of the encounter between the locals and those advising them, whether it involved the type of sheep they should raise or the introduction of corn,” says McCann. Whether it’s colonial authorities or experts from far-flung universities, “the local folks listen politely” and they may follow through or not. “He was able to look at photos, read land-use records, and look at the human encounter in a new and special way. We never consider the side of those receiving the knowledge, what they already know. It doesn’t mean that all local knowledge is right; it means we have to understand the conversation,” McCann says. “And Chris can do that because he has the language and can read documents dating back to before 1966, when Lesotho became independent.”

“It’s important to study in a place you’re comfortable in, with a lifestyle you want to live,” says Conz, a habitual hiker and runner who thrives on living simply and getting places under his own steam. He’s traveled a lot of tropical Africa, but prefers the seasonal changes of these highlands.

Part of what Conz calls “the essential water tower of South Africa,” his village of Qacha’s Nek sits in the center of an all-but-abandoned dam project in the ongoing, massive Lesotho Highlands Water Project. And the Basotho reflect the intersection of trial-and-error-honed agricultural folk wisdom with the promise of technology and contemporary material longings.

Lesotho is completely surrounded and in every way upstaged by South Africa, which since the 1890s has lured so many Basotho men to earn a livable wage in its mines that Lesotho can feel like a country of women, says Conz, who has stayed in private homes in remote villages, interviewing farmers, herders, and herbal healers. With some diamond mining and an emerging textile industry (a Gap factory opened in the capital of Maseru around a decade ago), Lesotho is a producer of domestically consumed maize, wheat, sorghum, and barley, and an exporter mainly of merino wool, which is locally woven into the blankets that serve as winter coats in the June cold. In Lesotho, sheep are a measure of personal wealth and the center of birth, wedding, and funeral rituals. One festive Basotho specialty is boiled sheep’s head.

Life in the village is harsh, and what relative wealth there is comes mainly from men who leave their families to work in South African mines. There’s a Sesotho saying for the men who don’t return, translated loosely as “those who point their ass toward their country.”

Named by the British, who set up headquarters in the town in 1888, Qacha’s Nek was referred to by a 19th-century missionary as “The Last Redoubt,” and even today the Sesotho name for its inhabitants is melele, or wanderers, says Conz. About 70 percent of Lesotho’s population is rural, and nearly a quarter of its people live in extreme poverty, in part due to environmental degradation from erosion and overgrazing, according to Rural Poverty Portal, an NGO sharing site powered by the United Nations International Fund for Agricultural Development.


A little secret does not destroy a village.

The long-term well-being of Basotho communities depends on communicating openly; decisions that may affect the whole community are made together by means of a pitso, or community meeting. In this proverb, one is cautioned to consider the results before sharing information.

But for Conz, little-studied Lesotho offers what he calls a distinctive opportunity to examine environmental change in fragile mountain grasslands and how it has influenced local history. Conz says he seeks “to explore the dynamic processes where weather, vegetation, livestock, and people interact over time.” By offering a historical perspective, he hopes not only to identify challenges such as soil erosion, food security, drought, and migration, but also to bring into focus what specific knowledge people need to acquire to address these challenges, and how they learn it. Equally important to Conz is the notion that “grasping this process will move us away from assigning blame for ecological problems and toward a richer understanding of how and why people apply some techniques and not others,” whether it’s crop diversification, pesticide use, or managing the spread of predatory flora.

At the University of Lesotho in Roma, Conz plumbs the archives for missionary, colonial, and government documents as well as newspapers and church records spanning the years 1880 to 1970. In Roma, Conz shares spartan quarters with mostly elderly monks in the more than century-old Catholic Brothers of the Sacred Heart compound. From there, he walks out the door to jog a dirt track that weaves past fields of maize and sorghum, cattle and sheep pastures, rocky streams, and dongas, abrupt deep gashes in the earth dotting Lesotho’s topography. “Look at this maize,” says Conz on a morning outing, bending to cradle an ear. “They’ve come and clipped the tops to bring back for animal fodder. Now they’ll let the corn dry on the stalk and turn rock hard, when it can be milled into flour. The early phase—called the milky phase—is for roasting and eating, but most of the maize is harvested in the stone phase.” 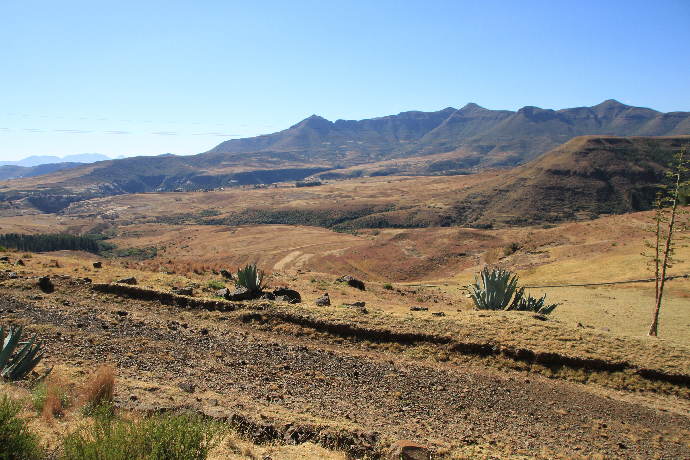 
Fools are the treasure of the wise.

Basotho society highly values education and wisdom, but this proverb cautions one to be careful in making decisions, which can be one’s undoing. 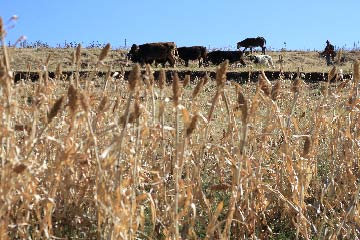 He treks along the mountain trails with a stick carved into a donkey head by a friend in his home village. Life in the village is harsh, and what relative wealth there is comes mainly from men who leave their families to work in South African mines. There’s a Sesotho saying for the men who don’t return, translated loosely as “those who point their ass toward their country.” Most families cook over wood fires or briquettes made of dung, while wealthier families have propane stoves. (Conz’s host family cooks on a stove in a roofless stone enclosure.) Electricity came only in the last few years to some villages, and the working fields reflect an allotment scheme handed down through a patrilineal clan system. “A lot of these villagers are men who have lived in the cities or worked in the mines and have turned their backs on urban middle-class life,” says Conz. “Some of the most dedicated farmers I know are people who have a little cushion, something saved from the mines.”


To milk onto a net.

To do something without progress. Historically, cattle-keeping has been at the center of Basotho culture and cow milk a nutritional staple. This expression points to the absurdity of a useless undertaking.


To cultivate old ground that was once plowed.

To renew an old friendship or love. Literally, this idiomatic phrase translates into “to resuscitate the hoes.” In rural areas, women cultivating the fields together remain a common sight, a reflection of community cooperation and well being. To begin using the hoes again signifies people are renewing a common good or relationship.

For now, before he sits down to organize his findings into a dissertation, Conz’s numerous interviews and observations are reinforcing the complexities of an agricultural economy on the edge. “My archival research and oral sources tell me that gender, age, education, and one’s relationship to the local chief were all key factors in guiding the way environmental knowledge is conveyed and formed,” says Conz. “The cultural contours of each interaction were specific.” For example, with so many men off to labor in the South African mines, women were left to work the land. Like soldiers returning from a war, the miners came home to new crops and new ways of doing things. “It is only by reconstructing these historical negotiations at a local level that we can understand how environmental knowledge is formed, transferred, and reconfigured over time,” he says. “My dissertation will use the localized case of eastern Lesotho to illuminate these processes on a larger scale, especially in rural Africa.”

What will Lesotho look like in the future, with its capital embracing small industry? “Will Maseru ever look like industrialized New England?” says Conz. “No, I don’t think so. But when people question the relevance of my research by saying agriculture’s such a small part of the picture when you look at the numbers, I say the numbers are part of it, but there are social and cultural meanings, and I would argue to the end of my life that agriculture will be an important part of these people’s lives for many years to come.”

The writer’s travel for these stories was supported in large part by the BU African Studies Center.

There are 2 comments on Lesotho: Life on the Edge