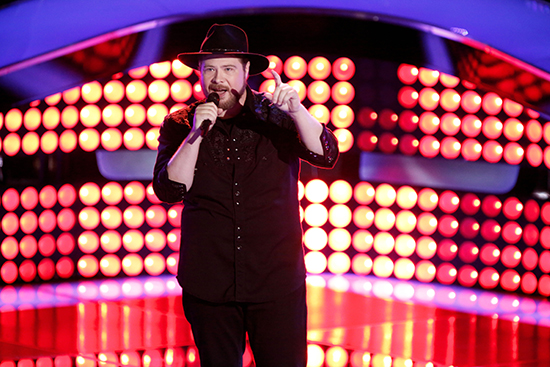 Jack Gregori sings “Ring of Fire” during the audition round of NBC’s The Voice on March 3. Photo by Tyler Golden/NBC

“It’s a superhero kind of thing,” he says with a chuckle. “I have a completely separate identity, where nobody knows what I go out and do at night. But instead of rescuing people, I’m encouraging them to drink whiskey at a bar.”

At age 38, the real estate lawyer finds the honky-tonk side of his life moving into the spotlight on NBC’s singing competition The Voice. In an episode broadcast March 3, performance coach and Maroon 5 front man Adam Levine chose Gregori (LAW’02) for his team after hearing him sing Johnny Cash’s “Ring of Fire” in a blind audition. “I love this guy!” Levine exclaimed. Tonight or tomorrow night—he says he doesn’t know which—Gregori will appear in the Battle Round, singing with a teammate, and Levine will pick one of them to continue on.

“Going forward and winning would be an amazing experience,” Gregori says. “But regardless of the outcome, hopefully it gets out the word and allows me to play more music.”

Gregori ran a title company with about 40 employees that thrived until the 2008 crash. With the recent improvement in the real estate market, he says, his legal career has been picking up. But his love of country music has been unwavering.

“I think the first time I heard it was when the Blues Brothers went to the honky-tonk in the movie,” he says, adding that real country music wasn’t popular among his peers growing up in Plymouth, N.H., and suburban Maryland. “I liked it, but it was difficult to listen to, because frankly, you’d get made fun of.”

Then, as an undergraduate at the University of Maryland, he found himself at a record store one night: “I was a blues guy then, and I recalled B. B. King did a Willie Nelson song called ‘Night Life.’ I figured if B. B. King liked Willie Nelson, then I should probably give it a try, and I bought a Willie CD. And that had ‘Poncho and Lefty,’ with Merle Haggard, on it, and I remember distinctly hearing Merle Haggard sing that for the first time, and it blew me away.”

He’s loved old-school classic country and outlaw music ever since, from Nelson, Haggard, and Waylon Jennings to newer performers like Jamey Johnson and Sturgill Simpson, “throwback guys doing it with a little bit of a new twist.”

At BU, Gregori spent time at music venues like Great Scott and Wonder Bar and took in jazz at Wally’s Café. “Wally’s, it’s the kind of place, if country music was played there it would be a great honky-tonk, but it’s the jazz equivalent—a great spot,” he says.

Gregori has nothing but praise for his years at LAW, which included a class with visiting professor Clark Byse, a legendary figure who was in his late 80s at the time. Byse, during his earlier years at Harvard, is thought to be the model for the intimidating Professor Charles Kingsfield in The Paper Chase. “That man was frightening even at his advanced age,” Gregori says. “That was a great experience.”

These days, he sings and plays guitar in a band called Human Country Jukebox, which plays Wednesday nights at Madam’s Organ in the Adams Morgan area of D.C. and other gigs once or twice a week (details are available on his website). He released an album last year with original songs like “Rebel/Yank.” Sample lyric: “I’m a rebel, she’s a Yank/She likes Bon Iver, and I like Hank.”

A friend sent Gregori’s music to The Voice, and the show contacted him for an audition. “I figured, why not,” he says. “It was definitely not something on my radar, much more of a what the hell, I’ll try it kind of thing.”

Playing on the big stage in Los Angeles was “quite intense,” he says. “Nothing is quite as high-stakes as knowing that millions of people will be watching and judging you. I think the feeling was similar to the butterflies I used to get before performing in front of a crowd, but amplified greatly.

“It was good to have that feeling again, to be honest, because it means I stepped out of my comfort zone and challenged myself.”

Gregori’s two appearances on The Voice so far, the audition in October and the Battle Round in December, were pretaped, and he’s not allowed to reveal the outcome. But if he does remain with Team Levine, he will return to Los Angeles for the live competition.  He’s not sure when that will be, but the show’s season runs through May.

“I definitely live a dual life, which can be tough, because they’re very different lifestyles,” he says. “I’m lucky that I’m in a position where I can nurture my music while at the same time working enough to survive, which is not a luxury that everybody has.”

From LAW to Outlaw Musician