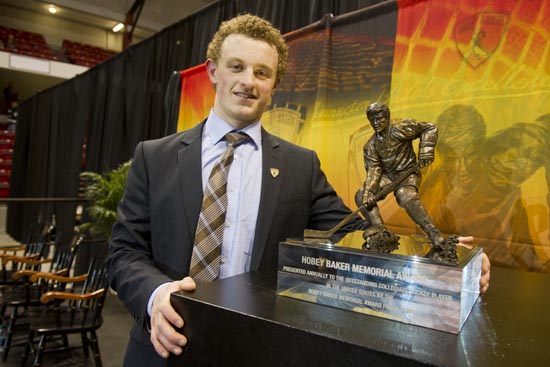 On Friday, less than 24 hours after scoring two goals to help his team advance to the national championship game, BU’s Jack Eichel was named the winner of the 2015 Hobey Baker Award, the highest individual honor given to an NCAA hockey player. He becomes only the third Terrier to receive the award, following Matt Gilroy (MET’09), who won it in 2009, and Chris Drury (CAS’98), who won it in 1998. Both went on to careers in the National Hockey League.

“It was really nice to hear my name. My mom and dad are sitting there in the front row,” Eichel said soon after being announced as the winner. “I got choked up for a minute talking, because I looked down and I saw my mom and she was crying. It choked me up just because of how important my parents are and everything they’ve done for me. I can’t say enough good things about them. I wouldn’t be nearly the player or person I am today if it wasn’t for them.”

Winning is “a huge compliment and a huge honor—just look at some of the people who have won the Hobey Baker Award,” said the freshman foward. “I wouldn’t be here accepting this award if it wasn’t for our team. Through all the ups and downs of a season, we’ve stuck together and persevered and made a lot of sacrifices and been through a lot of adversity.”

Hobey Baker was a legendary amateur of the early 20th century who played for Princeton and helped New York’s St. Nicholas Club win a national amateur championship in 1915. He was considered the best amateur player in the country and “the ultimate gentleman sportsman.”

Eichel led the Terriers to the Frozen Four by collecting 67 points in just 38 games, with 24 goals and 43 assists. He is the 2015 Hockey East scoring champion, Rookie of the Year, and Player of the Year. He will be eligible for the NHL entry draft this June.

“Winners are chosen not for raw skill or stats or character alone, though those are important,” according to the Hobey Baker Memorial Award Foundation website. “They are selected for everything they do,” including exhibiting strength of character, contributing to the integrity of their team, and showing scholastic skill and sportsmanship.

Eichel is just the second freshman ever to win the Hobey Baker. The only other, Paul Kariya of the University of Maine, won in 1993. Last year’s winner was Johnny Gaudreau of Boston College. The award was first given in 1981.

There is 1 comment on Jack Eichel Wins Hobey Baker Award