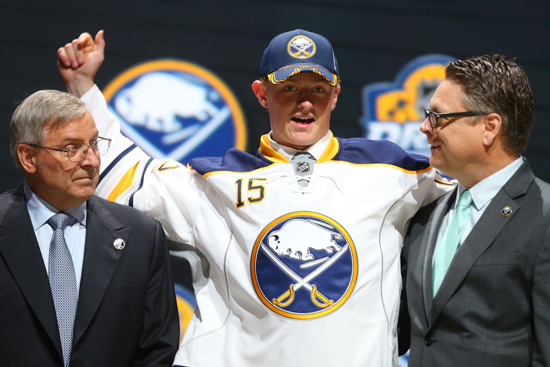 BU hockey forward Jack Eichel was chosen by the Buffalo Sabres in the first round of the NHL draft Friday. The 2015 Hoby Baker Award winner, shown with team executives, was the second overall draft pick. Photo by Bruce Bennett/Getty Images

Eichel (CGS’16), the second pick overall, won this year’s Hobey Baker Award, the highest individual honor given to an NCAA hockey player, and was instrumental in a turnaround season that saw the Terriers lose a heartbreaker in the final game of the Frozen Four. “Hearing your name called up there at the podium is really a dream come true,” Eichel says. “This puts me one step closer to reaching my goal of playing in the NHL, and I’m thrilled to be a part of the Sabres organization. I look forward to the day I get to put on their jersey” to play.

He has yet to say if he will leave BU next year to play in the NHL. In January, he told BU Today that he would “make the jump when the time is right.”

Sabres general manager Tim Murray told the press that drafting the 18-year-old Eichel was the easiest decision of his career, and one that could potentially transform the Sabres, who finished last in the NHL this year. “This is a big step for us in terms of becoming big boys in the league,” Murray says.

As expected, the Edmonton Oilers, with the first pick, chose the Ontario Hockey League’s Connor McDavid. The competition between Eichel and McDavid has been the subject of feature stories in Sports Illustrated and the New York Times, and it came to a pinnacle in December when the two led their respective countries in the World Junior Championships. Team USA lost to Russia in the quarterfinals, and Canada then went on to win the competition, beating Russia in the finals.

Eichel, who hails from Chelmsford, Mass., led the Terriers to the NCAA finals by collecting 67 points in just 38 games, with 24 goals and 43 assists; the team finished the season 28-8-5. He is the 2015 Hockey East scoring champion, Rookie of the Year, and Player of the Year, as well as just the second freshman ever to win the Hobey Baker.

Terrier head coach David Quinn (CAS’89) says he is extremely proud of his player. “He had an incredible season for us, and he has worked extremely hard to turn himself into one of the top NHL prospects in the world,” he says. “As a coach, you really want to see your players reach their goals, and Jack just keeps on doing that.”

On Friday night, Eichel became the 11th Terrier to be an NHL first-round draft pick. Three additional BU players were also drafted: forward A. J. Greer (CGS’16), who went 39th to the Colorado Avalanche; incoming freshman Jakob Forsbacka Karlsson, who went 45th to the Boston Bruins; and Jordan Greenway, also an incoming freshman, who went 50th to the Minnesota Wild. BU was the only school with four players selected in the top 50.

During the 2014–2015 season, 40 former Terriers played hockey at the professional level.