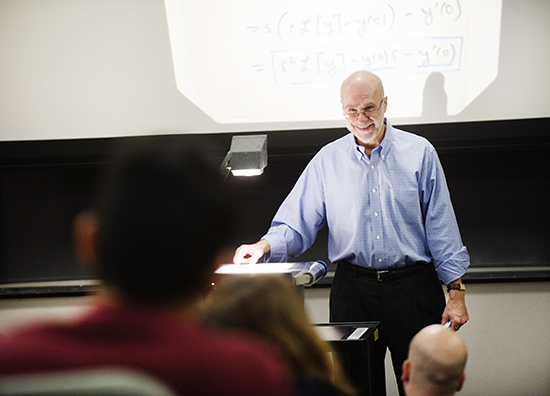 Consider a real-life example Paul Blanchard, a College of Arts & Sciences professor of mathematics and statistics, has used: the 1940 collapse of the Tacoma Narrows Bridge, which swayed in high winds before plunging into Puget Sound. Blanchard’s classes sought differential equations to explain the destructive rocking of a suspension bridge that was nicknamed “Galloping Gertie” for its wind-tossed motion.

This attention-grabbing instruction won him a Mathematical Association of America teaching award in 2001. Now, his work codeveloping software called DETools to better teach differential equations has earned him BU’s second annual Gerald and Deanne Gitner Family Award for Innovation in Teaching with Technology.

Since Newton’s time, no genius had much improved the age-old way to solve what’s called an ordinary differential equation; solution required drastically simplifying the equation to come up with the formula, says Robert Devaney, a CAS mathematics and statistics professor.

“The kind of differential equations that we study in the Ordinary Differential Equations class MA226 have solutions,” Blanchard says, but with certain types of equations, “we might find that we cannot express the solutions in terms of the standard formulas that we use in mathematics. Numerical simulation is crucial…both in our classrooms and in our research programs.”

And in others’ classrooms. Devaney writes in his letter recommending Blanchard for the Gitner Award that DETools “opened up a whole new way to study differential equations. The text and accompanying software are now used at hundreds of colleges and universities around the world.” The two men, along with Glen Hall, another CAS professor of mathematics and statistics, coauthored a textbook about differential equations.

“I’ve used technology in my teaching whenever appropriate for more than 35 years,” says Blanchard, who began revising MA226 in 1993. “But more recently, technology has become much more prevalent in our world and much easier to use. It is not a magic bullet, but I can now display graphs, run animations, and illustrate concepts in ways that I could not have imagined when I taught my first calculus course in 1975.”

A 35-year veteran of the BU faculty, Blanchard earned a bachelor’s degree from Brown and a PhD from Yale. He has been a finalist for the Metcalf Cup and Prize, BU’s highest teaching honor, and was a member of the first class of fellows of the American Mathematical Society in 2012.

The Gitner Award is conferred by the Provost’s Office and the Center for Excellence and Innovation in Teaching. The winner receives $10,000. Last year’s inaugural honorees were a team of CAS physics faculty: Andrew Duffy, Manher Jariwala, Pankaj Mehta, and Bennett Goldberg. The award is endowed by Gerald Gitner (CAS’66) and members of the Gitner family.

Blanchard will receive the award during a private ceremony on May 5.