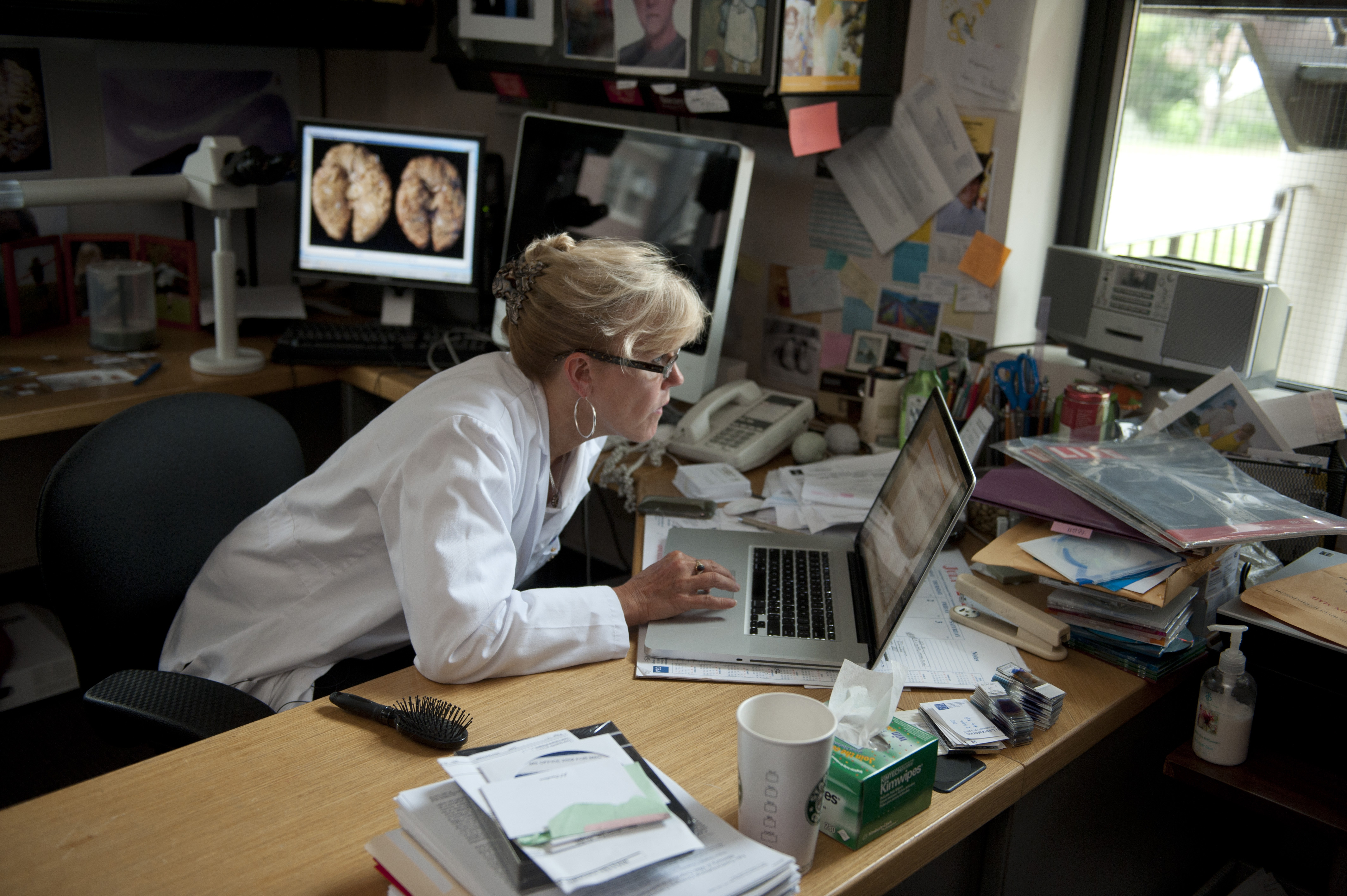 Ann McKee, a MED professor of neurology and pathology, studies the long-term effects of repetitive brain injury. “It’s shocking to see neurodegenerative disease in a 25-year-old.” Photo by Vernon Doucette

For Ann McKee, every brain tells a story. And sometimes it’s a tragic one. McKee, a professor of neurology and pathology at the Boston University School of Medicine (MED), is the director of neuropathology for the Veterans Affairs New England Healthcare System, and also directs BU’s Chronic Traumatic Encephalopathy Center. Chronic traumatic encephalopathy (CTE) is a degenerative brain disease found in athletes with a history of repetitive brain trauma. McKee first identified its telltale mark—tiny tangles of a protein called tau, clustered around blood vessels—in the dissected brain of a boxer who had been diagnosed with Alzheimer’s disease.

Although most people associate CTE with professional football players, McKee has found it in the brains of soccer, hockey, rugby, and baseball players as well. Her research has alerted the public to the long-term dangers of repetitive hits in sports and raised tough questions about safety. McKee was invited to speak about this growing public health concern at the annual meeting of the American Association for the Advancement of Science (AAAS), the world’s largest general scientific society, held in February 2015 in San Jose, CA. She told BU Research the story behind her discovery of CTE, and what it might mean for the future of sports.

BU Research: You’re a world expert on tau protein, which has been implicated in Alzheimer’s, CTE, and other brain diseases. Have you studied tau your whole career?

It’s beautiful, the way it collects throughout the nervous system and just sort of fills up the nerve cell. It’s always been quite lovely to look at, visually captivating. I mean, how crazy is that? But it’s true.

When you started studying tau, you were studying Alzheimer’s?

I was interested in Alzheimer’s, but I also worked on PSP (progressive supernuclear palsy), and something called corticobasal degeneration.

Those are not so famous.

No, they’re not so famous. But I got very involved in defining what these individual diseases looked like. It’s like being at the Smithsonian and being really interested in one collection of pottery or something. And once you start understanding it, you start seeing all these differences, and it’s like “Whoa!”

Do you remember the first time you saw a brain with CTE?

Yes. It was phenomenally interesting. The first case was Paul Pender, a professional [middleweight] boxer here in the Boston area. He had twice been world champion. That was my first time seeing it under the microscope. I looked at the slide and it was like “Oh my God! This is so amazing. I’ve never seen anything like this.” It just blew my mind. That was 2003.

How did it look different than, say, a brain with Alzheimer’s?

Alzheimer’s disease has these beta amyloid plaques that look like small puffs of smoke throughout the brain. You have to have these plaques in fairly high numbers to make the diagnosis of Alzheimer’s disease. In most cases, and certainly below the age of 50, CTE doesn’t have any plaques. The other difference is the tau pattern. Tau clusters in little tangles, and in CTE they’re always around blood vessels. So the blood vessels are a clue to the origins of CTE—we think it might be damage to the vessels and leakiness of the vessels that’s causing it.

How did you end up with this boxer’s brain?

He was a veteran and died at the Bedford VA with a diagnosis of Alzheimer’s disease. And there was no amyloid, so it was like, “Well, it’s not Alzheimer’s disease.” And the tau pattern was so unusual that I asked my technician to do this very old technique that people used to use in neuroanatomy before everything was automated. It’s difficult—you cut the brain very slowly in these big sections that contain the whole hemisphere, and then you have to stain it while it’s floating in water, and then you have to very painstakingly lay it all out on the slide. It was amazing, because it allowed you to see the landscape of the brain. So it’s phenomenally informative. It allows you to see nuances that you can’t really appreciate with tinier, thinner specimens. The technique contributed to our recognition that this was really something quite extraordinary. This was something really different.

Not really. It was primarily called dementia pugilistica and most people thought it affected only boxers. Then, in 2008, I had the opportunity to look at a football player who had had some cognitive issues, and it was like “Oh my God, another one.” And what I couldn’t believe was that the football player was 45. If you’re used to studying neurodegenerative diseases, 45 is incredibly young. So after that case, we started the center and started collecting more brains. The next brain we got was from a football player who died at the age of 45, too. And it was the same disease. It was like, “What? Holy Christmas.”

And you now have 240 brains in the CTE bank? Are most of them football players?

Yes. We have more football players in the bank than any other sport. But we have boxers, we have hockey players, we have a few soccer players, a couple rugby players. We have military.

When CTE started coming into the public perception, it was just about the NFL. Now it’s getting bigger and bigger.

Are there implications for kids’ sports?

There’s a lot of interest now in heading in soccer, because that would be something easy to take out. It wouldn’t destroy the game, especially at the lower levels. But also in football, which is such a hugely popular sport, we need to understand the risks for young athletes and reevaluate whether or not young kids should even be playing this game. Their bodies are immature, their necks aren’t very well developed, they’re not very coordinated. Plus, they’re literally walking bobble heads with big heads, thin necks, and small bodies. Your brain is adult-size by age four and it’s relatively heavy for those little bodies. The only good thing is, they’re low to the ground.

What surprises you most about CTE?

The thing that is shocking to me, and continues to be shocking, are the 25-year-olds who have died with this disease. Not because of it—it’s usually a suicide or an accidental death. I can’t say that CTE caused their suicide. But for me, it’s shocking to see neurodegenerative disease in a 25-year-old. It’s horrible. And it’s undeniable. We’ve seen it in enough 20-somethings now that you can’t escape this. It’s a shock to think, “That guy looks so young, and he’s dead. And he’s dead with this.”

There are 3 comments on Head Examiner