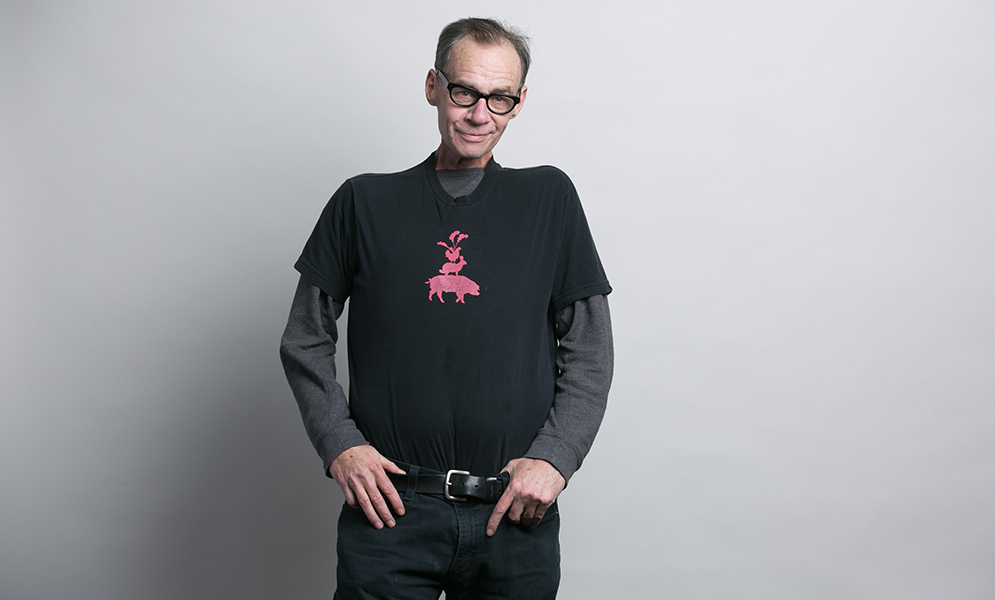 David Carr could be as impishly endearing as he was professionally demanding, mourning students and colleagues say. Photo by Katherine Taylor

David Carr’s passion for writing produced a 2008 memoir baring his enslavement to crack cocaine in the 1980s and ’90s. His personal experience that people can improve and escape even the darkest holes—and his fearlessness in the self-revelation department—shaped the noticeably personal syllabus last fall for his College of Communication course Press Play: Making and Distributing Content in the Present Future:

I grade based on where you start and where you end. Don’t work on me for a better grade—work on your work and making the work of those around you better. Show industriousness and seriousness and produce surpassing work if you want an exceptional grade.

Not need to know, but nice to know: Your professor is a terrible singer and a decent dancer. He is a movie crier but stone-faced in real life. He never laughs even when he is actually amused. He hates suck-ups, people who treat waitresses and cab drivers poorly, and anybody who thinks diversity is just an academic conceit. He is a big sucker for the hard worker and is rarely dazzled by brilliance. He has little patience for people who pretend to ask questions when all they really want to do is make a speech.

New York Times columnist Carr, who died February 12 at 58, after one year on the COM faculty, was a juggernaut driving for both professional betterment and personal, human connection.

An expert on, and enthusiast of, digital communication and social media, Carr taught his first BU class last fall as the University’s inaugural Andrew R. Lack Professor, a position created by a gift from Andrew Lack (CFA’68), CEO and director of the Broadcasting Board of Governors, to study future business models for journalism. The field has struggled to adapt to the digital age, and Carr’s Monday “Media Equation” column in the Times opened each workweek with blunt commentary about publishing and communications, especially online.

In the video above, Andrew Lack (CFA’68), CEO and director of the Broadcasting Board of Governors (from left), David Carr, and Thomas Fiedler (COM’71), dean of COM, discuss how technology is making media more interesting. Video by Devin Hahn. Photo by Paul Quitoriano

His professional chops endeared him to Martin Nisenholtz, who just joined COM’s faculty as a professor of the professional practice of digital communication after leading the Times’ digital operations. Nisenholtz fondly remembers an industry panel discussion that included Carr, where “some obnoxious member of the digerati” predicted the newspaper’s demise at the hands of online content-aggregating sites. “David just took a printout of this guy’s website and dramatically cut out all of the stories that would disappear from his interface” without Times content, he says. “The thing looked like a kid’s cutout. The audience roared.”

Mitchell Zuckoff, a COM professor of journalism, last saw Carr a few weeks ago over coffee in Warren Towers. At one point, he says, Carr put his head in his hands, bemoaning that he hadn’t become the quality teacher he’d hoped to be. “I told him he was nuts: two of my best grad students were in his class,” Zuckoff says, “and they couldn’t stop raving about him.”

Carr drove himself to bond with people in matters personal as well. With Susan Walker (GRS’09), a COM associate professor of journalism, he’d discuss their shared joys and perils of parenting 20-something twins, comparing the many hits one daughter’s online video got to his own “‘meager’ circulation,” Walker says. They also compared notes as middle-aged people who’d skied the former Olympic downhill run at Squaw Valley with their kids. “Never again, we both agreed.”

“In class, he treated us as colleagues, true journalism professionals,” says Jamie Bologna (COM’15). With a conversational teaching style that veered toward profanity (“He swore like a sailor,” Bologna says), the man who pushed back against addiction and flat-footed media management of technology “pushed us not to accept how things were, but to advocate for ourselves in our work and our careers. He regularly reminded us that to get where we want to be, we’ve got to be ready to eat our pride and work really, really hard.”

Mikaela Lefrak (COM’15), Carr’s teaching assistant last fall, spent months working with him on preparing the class. She says that Carr invited students to speak up without raising their hands first (“This isn’t Montessori,” his syllabus read). Lefrak recalls their first phone chat, when Carr described himself as “brutally honest, demanding greatness from others, but loyal to the core to people he cares about”—as self-knowing a description as possible, she says.

“I’m sure he seemed intimidating to a lot of folks,” she says. “But David was a big softie at heart,” treating his students to snacks, the kind “a dad would pack in his kids’ lunch when their mom was out of town—Fritos, cookies, Mountain Dew.” Demanding? Absolutely—she recalls him telling the class, “I want you to sweat it out. Think of something no one else has ever thought of to get you there. Writing is an act of invention.”

The payback, Lefrak says, was his lobbying for students as they hunted for jobs, telling them, “I always have time for you guys.”

“He had a way of telling me and others…that parts of our work sucked,” recalls Alistair Birrell (COM’15), “but he did it in a way that made me realize that my work really did suck.” That made Carr’s compliment that an assignment had turned out “pretty sweet” “a fairly momentous occasion for me,” says Birrell. 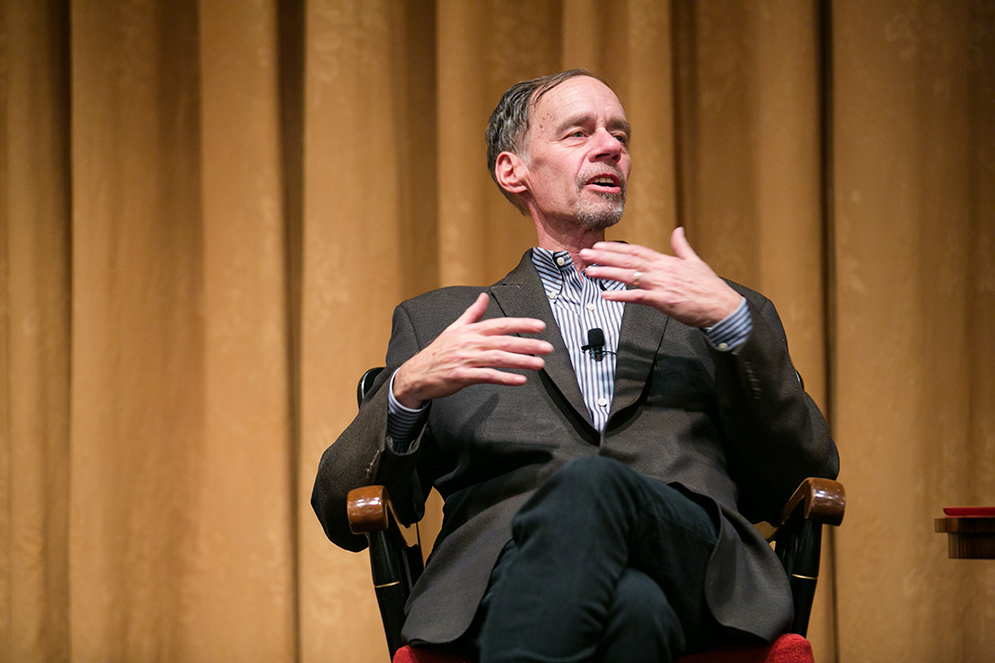 In just the one class she had this winter with Carr—the others canceled by campus snow closures—Sonia Su (COM’15) found herself in love with his course. “We discussed Snapchat, and he made us laugh with his sometimes self-deprecating humor.” For Su, Carr is less a tale of fond memories accumulated than regret at time together cut short: “I’m incredibly sad that we weren’t able to spend more time with such an inspiring writer and leader.”

Chris Daly, a COM associate professor of journalism, dined with Carr recently and marvels at how a celebrated journalist obsessed over his students. “The only names he dropped were of his students.…He was thinking several steps ahead on their behalf about what they should be doing to launch their careers.”

When William McKeen, COM’s journalism chair, was diagnosed with cancer recently, Carr was one of the first people to contact him. Having had cancer himself, speaking with the authority of one who’d passed through the same ordeal, Carr “told me to keep up my spirits, and if possible, to have a sense of humor about it all,” McKeen says.

The New York Times, where Carr had worked since 2002, reported that he collapsed Thursday night in the newsroom and was pronounced dead at the hospital. The results of an autopsy were released Saturday evening, with the finding that Carr died of complications from lung cancer and that heart disease was a contributing factor.

“David’s death is an immeasurable loss to his family, his friends, his colleagues in journalism, and all of us here in COM,” says Thomas Fiedler, dean of COM. “He brought unique talents to Boston University and was just at the beginning of what I know would have been a brilliant new career as a teacher and inspiration to his students.” Fiedler (COM’71) says that COM plans to continue Carr’s class and is working to find a successor.

In a Boston Globe interview published the morning after his death, Carr, for all his love of social media and technology, noted—with his usual candor—the differences between himself and his BU students:

“One generational difference is that they rely on texting, which is not a good business or academic application. I much prefer email, which allows you to keep an archive, send attachments. I also made it clear that there was no texting or Facebooking during class. When someone did it, I would stop and say: ‘Do you need a few moments so you can finish what seems so important?’”

Amy Laskowski and Susan Seligson contributed to this story.

David Carr: A Will to Excel and to Connect with Others

There is 1 comment on David Carr: A Will to Excel and to Connect with Others

David Carr: A Will to Excel and to Connect with Others
1
share this