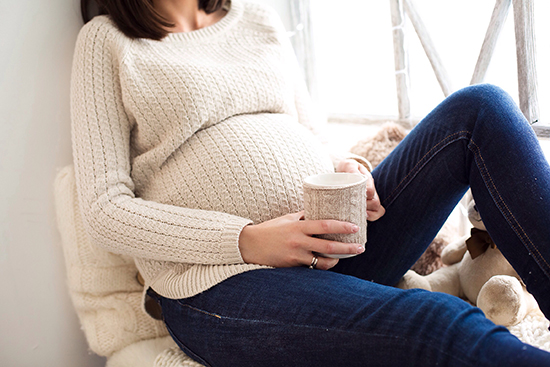 A study led by SPH researchers found that consuming less than two servings of caffeinated coffee, black tea, or herbal/green tea a day early in pregnancy led to a slightly higher risk of having a miscarriage.

For years, newly pregnant women or women trying to conceive have been getting mixed messages about caffeine.

A new study led by School of Public Health researchers sheds some light on the issue of whether or not these women should be drinking any caffeine. They found that women who drink even a moderate amount of coffee and soda a day during early pregnancy have a slightly higher risk of miscarriage, but that caffeine consumption prior to conception does not appear to elevate risk.

The study, published in the journal Human Reproduction, is the largest to date of prospectively measured preconception caffeine consumption and risk of miscarriage. Caffeine has been suspected of being a risk factor for miscarriage since the 1980s, but previous studies have shown conflicting results.

In the new study, researchers examined caffeine consumption among more than 5,000 women enrolled in a Danish study between 2007 and 2010 and who were planning to become pregnant. Women recorded the amount of caffeinated beverages they drank daily on questionnaires before conception and during early pregnancy. They were asked to log their servings per week of coffee, herbal/green tea, black tea, and caffeinated sodas.

The amount of caffeine in a cup of coffee varies depending on the brew strength, but on average, an eight-ounce serving has about 135 milligrams of caffeine.

Study lead author Kristen Hahn, an SPH research fellow in epidemiology, says the risk of miscarriage peaked at consumption of around 200 milligrams a day, followed by a decline in risk at higher levels of intake.

Hahn says that although the study is larger and more extensive than prior ones, its findings still leave questions about caffeine’s impact, because there was no evidence of a “dose-response relation” between increasing consumption of caffeine and higher miscarriage rates.

Caffeine crosses the placenta and has a prolonged metabolism in pregnant women, compared with nonpregnant women. Fetuses eliminate caffeine slowly, suggesting that very high maternal caffeine ingestion could increase fetal caffeine levels exponentially. Further, some studies have shown that caffeine consumption alters the body’s hormone levels, which in turn could affect the risk of miscarriage.

But because physiologic processes change during pregnancy, the associations between caffeine and hormone concentrations still have not been fully established.

Coauthor Elizabeth Hatch, an SPH professor of epidemiology, says that in general, she would recommend that women cut down on caffeine during pregnancy, but that the evidence is not firm enough to suggest eliminating caffeine altogether.

“Many women develop an aversion to coffee in early pregnancy anyway, so it can be easier for even the most caffeine-addicted to cut back,” she says. “It would be best not to substitute caffeinated sodas—or any sodas for that matter—because, in addition to caffeine, regular sodas contain large amounts of sugar, which some studies have linked to a higher risk of gestational diabetes and other adverse health outcomes.”

The March of Dimes recommends that pregnant women limit caffeine consumption to 200 milligrams a day “until we know more about how caffeine can affect pregnancy.” Similarly, the American College of Obstetricians and Gynecologists says that while results of studies on caffeine consumption and miscarriage are unclear, most experts conclude that consuming fewer than 200 milligrams of caffeine a day during pregnancy is safe.

The SPH study is the latest from an ongoing research project directed by Hatch known as Snart-Gravid. The study was funded by the Eunice Kennedy Shriver National Institute of Child Health and Human Development. Hahn’s work was funded in part by the BU Reproductive, Perinatal, and Pediatric Epidemiology Training Grant from the National Institutes of Health.

A version of this article originally appeared on the BU School of Public Health website.

There are 6 comments on Caffeine and Pregnancy