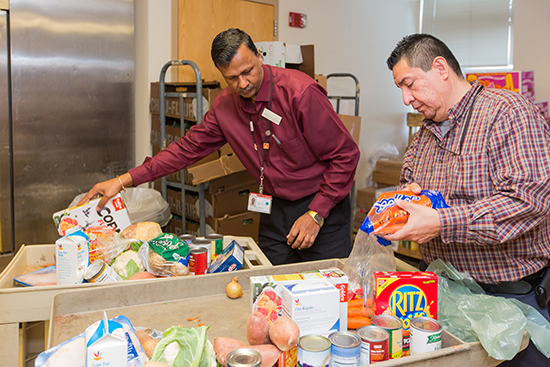 It’s 8:30 a.m. on a Friday and four men in the basement of the Boston Medical Center Menino Pavilion are removing fruit, vegetables, milk, eggs, and meat from the building’s walk-in refrigerator and freezer and putting them on carts. They will take the food to the fourth floor of the adjacent Dowling Building, where they’ll sort it and add nonperishable food, like bread, crackers, pasta, cereal, and soup. An hour and a half later, people old and young begin arriving, dragging an assortment of roller bags, suitcases, and cloth and plastic bags to carry the food home. This is Boston Medical Center’s Preventive Food Pantry.

Over the next six hours, the pantry will serve about 90 people—giving them enough to feed themselves and their families for several days. Presiding over the efficiently run proceedings is Latchman Hiralall, the food pantry manager and a registered dietitian.

When BMC opened the pantry in 2001, it was the first of its kind in the country. No other hospital had anything like it. The staff imagined that they would serve about 500 people a month.

“The first month, we were serving over 1,000,” Hiralall recalls. Pantry cofounder Deborah Frank, a School of Medicine professor of pediatrics and director of the BMC Grow Clinic, says that prior to the pantry’s launch, frustrated dietitians would come up to her saying, “I am so tired of having mothers burst into tears when I tell them their children need to eat.” At the time, the hospital was operating two small food pantries, one for expectant mothers and another for children in Frank’s clinic. But patients in the emergency room were admitting that they didn’t have enough food for themselves and their families. Doctors knew they had to do more.

Today, the food pantry serves approximately 7,000 people a month, and it relies exclusively on philanthropy for support. Most of the food—an average of 12,000 pounds a week—is donated by the Greater Boston Food Bank. Another regular benefactor is Ocean State Job Lot. And the pantry relies on the support of individual benefactors to underwrite its annual operating budget of $300,000. Two local Whole Foods stores (the Fenway store and the new store on Harrison Avenue in the South End) have teamed up with the pantry as well. They place foodstuffs that they know the pantry can use in bags at their cash registers with a sign that says, “Feed kids now.” Customers can buy the bags when buying their own groceries and representatives from the pantry pick them up. The nonprofit food and rescue organization Lovin’ Spoonfuls has been another regular supporter.

A food pantry unlike any other

To access the food pantry, a patient must be referred by a BMC primary care physician, clinician, nurse, or social worker. Patients are screened and those deemed “food insecure” (unable to obtain adequate food at some point during the year) are given a prescription to the pantry. Many of the pantry’s clients suffer from diabetes, hypertension, obesity, HIV, and AIDS—and are in particular need of nutritious food. At BMC, the goal is to make picking up food as routine as picking up a prescription.

Making food part of a patient’s medical plan eliminates the stigma of going to a neighborhood food pantry, says Hiralall. Clients can visit the pantry, which feeds an entire household, twice a month.

“We make sure that all the medical residents who see patients in our clinics know about the pantry, how to screen families for food insecurity, and how to refer them to the pantry,” says Alan Meyers, a MED professor of pediatrics and a BMC pediatrician, who was instrumental in getting the pantry launched. Meyers notes that the number of food-insecure families with young children seeking care in BMC’s emergency department has been steadily increasing since 2007—it hit 38 percent last year.

Patients referred to the pantry and their families are screened and their medical histories carefully reviewed to determine any special dietary restrictions or food allergies. For example, patients with hypertension are given soups and sauces low in sodium. The pantry’s clients come from all over the world—Haiti, the Middle East, Africa, the Caribbean, among others—and each family is asked about foods their culture or religion prohibits them from eating. “We don’t want to give them food that they’re not going to eat, or that they’re not supposed to have,” says Hiralall.

Every time a patient visits the pantry, Hiralall makes a note in the person’s medical file so that his or her physician knows the patient is using the pantry. He’s also able to see if patients are keeping their doctors appointments, reminding them to schedule one when he sees they’re overdue.

Pantry clients are given a customized cart of food, based on their needs. They can take everything on the cart or exchange items for something else. Recently, one woman made it very clear that she didn’t want any apples. She was given an extra bag of carrots instead.

The emphasis on fresh and nutritious foods distinguishes the food pantry from others. Many pantries rely on canned vegetables and fruits. Here, carts are routinely filled with fresh carrots, pears, apples, cauliflower, onions, potatoes, and rutabaga—produce often hard to find in poor neighborhoods.

Because many clients are immigrants, they are often unfamiliar with certain foods—for example, butternut squash or rutabaga. They don’t know what to do with them, so they’re reluctant to take them. That’s where BMC’s Demonstration Food Kitchen, just across the hall from the pantry, comes in. Nurse and dietitian Tracey Burg runs the kitchen and teaches classes in how to prepare unfamiliar foods. If she sees that the beets have few takers, she’ll whip up an easy-to-make beet dish and bring samples to the pantry for clients to try, along with photocopies of the recipe.

The pantry has been a lifeline for people like Juana Arias. Her 16-year-old daughter, Rachel, who has severe asthma, is a BMC patient. Arias has been coming to the pantry almost since it opened, and she says it provides more fresh vegetables and fruit than she’d be able to get at her local food pantry. She can’t say enough about the warmth and sensitivity of the staff.

Maud and Marc, a brother and sister from Haiti, both longtime BMC patients, say they can stretch the food they get at the pantry to last two weeks. Without it, Maud would probably sit home and drink coffee all day to stave off hunger, she says, because she wouldn’t consider using another pantry.

BMC internist Jennifer Guttierez McCarty, a MED lecturer in medicine, refers as many patients as she can to the pantry. “I have so many patients with chronic medical conditions such as diabetes and hypertension who do not have the finances to afford the quality healthy food they need to nourish themselves and their families,” says McCarty. “This helps relieve some of the psychological stressors that patients feel, knowing that they have more access to the nutritional support they need.”

The need is great, all year long

This week, in addition to its regular weekly distribution, the Preventive Food Pantry expects to hand out more than 800 turkeys. And it’s not just turkeys. They’ll be putting together bags with all the holiday meal fixings—like stuffing, mac and cheese, butternut squash, and cake mixes. Hiralall says they welcome volunteers to assemble the bags. Volunteers play a central role in running the pantry, which is staffed by just four people.

Suffolk University junior Molly Kelly, who is majoring in sociology, with a focus in health, began volunteering one day a week this semester. She’s learned a lot from the experience. “It’s made me realize that you can never know just by looking at someone whether they’re hungry or not,” she says.

Like many food pantries, Hiralall says, his tends to get the most donations around the holiday season, but the need is often greatest during the summer months. Children receiving free breakfast and lunch during the school year are home, leaving parents to scramble to find the money to pay for extra meals.

By early January, the Preventive Food Pantry and Demonstration Kitchen will move to new—and bigger—quarters, in the basement of the Yawkey Ambulatory Building next door. The new space will give them their own walk-in freezer and refrigerator and more room to store food. Hiralall estimates that they’ll be able to hand out an additional 3,000 to 4,000 pounds of food each week once they’re up and running in the new space.

What is Hiralall most proud of having accomplished in his 14 years running the pantry? “We haven’t run out of food once in 14 years,” he says. “We’re very fortunate.”

Learn more about volunteering or donating to the food pantry here.

At BMC, Food Is Medicine

There are 3 comments on At BMC, Food Is Medicine