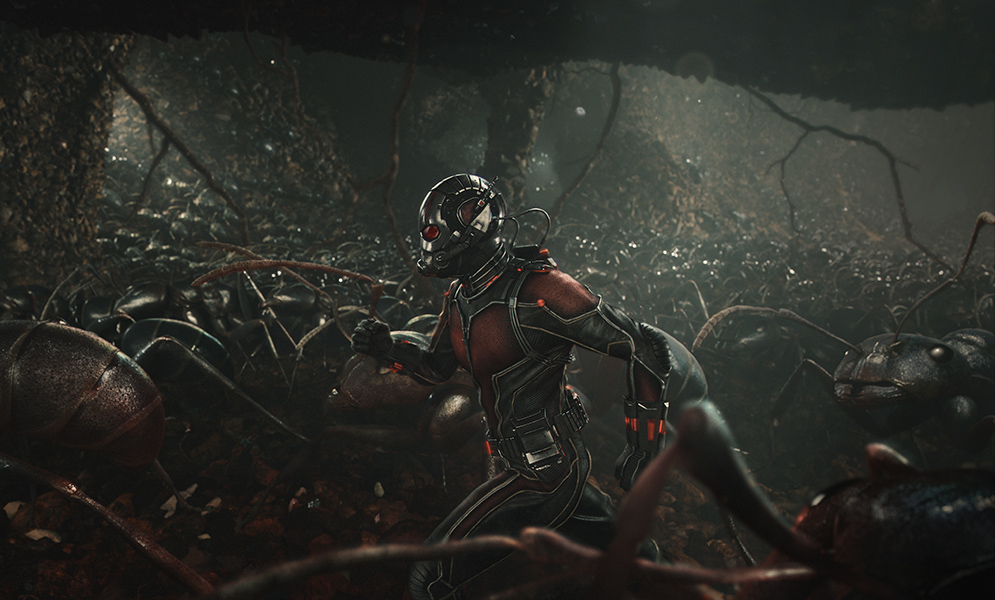 The silver screen is rarely kind to the humble ant. Usually portrayed as creepy-crawly and mindless, movie ants threaten humans as freakish giants (Them! 1954) or deadly swarms (Empire of the Ants 1977), rather than living alongside us in harmony.

But wait long enough, and every ant will have his (actually her) day. In the summer blockbuster Ant-Man, currently #1 at the box office, actor Paul Rudd plays an ex-con with an engineering degree who turns superhero with a suit that gives him the ability to change size and control ants. He shrinks to ant size and learns how to harness the ants’ collective intelligence. For once, insects are the heroes.

“It’s a turning point for ants in cinema,” says James Traniello, a College of Arts & Sciences professor of biology, who joined BU Today for a matinee viewing of the film. Traniello has spent his career studying the social behavior of ants, and is also—perhaps not surprisingly—a connoisseur of insect films. He gives Ant-Man an enthusiastic thumbs-up, though he had a few quibbles with the science.

BU Today: What did you like about the film?

Traniello: For once ants were portrayed as cooperative and in line with human interests, as opposed to being a force that’s out to destroy humans. The other movies about ants show science trespassing on nature, like tests of atomic bombs in the desert that generate radioactive fallout and create mutants—the result of humans playing with technologies that they shouldn’t be playing with. And invertebrates got involved in this in the fifties, with giant spider, scorpion, octopus, and locust films, and Them! in 1954.

Ant-Man was different. I guess the new view of science trespassing on humanity involves the theme of weaponization, which is really very modern. That is, you weaponize microbes, like anthrax, and you weaponize altruism through religion, and now you weaponize body size.

Ants in the Movies!

Them! (1954)
Ants get nuked by atomic tests, mutate into monsters that threaten civilization.

The Naked Jungle (1954)
Charlton Heston on a Brazilian plantation trying to hold off an army ant attack.

Empire of the Ants (1977)
Joan Collins is a scam artist in Florida, selling land overtaken by giant ants.

Antz (1998)
Ant tries to break from totalitarian society, win affection of the princess he loves.

Ant-Man (2015)
Ex-con uses super-suit to win back his daughter and save the world.

The New York Times review had an interesting quote: “Ants are not known for individualism, which makes them, in some ways, a less promising platform for superheroism than spiders or bats.”

Well, Ant-Man is not really an ant. And one thing that they totally gloss over—which is as amazing as being able to shift your size—is that he could translate human thought into brain waves, and then translate that into a chemical language to communicate with ants. That’s better, to me, than getting big and small.

There was only one point in the movie where I heard you snicker. That was when the scientist played by Michael Douglas—he looked great, by the way, don’t you think?

Yes, he did. If you looked deep enough into his eyes you could see Spartacus.

I thought he made science seem very cool and sexy. Anyway, at one point he says something like: “Ants can do incredible things, but they need a leader.” And then you groaned.

What about the queen? Doesn’t she kind of direct the colony?

The queen isn’t a leader. She’s basically a giant ovary—she just lays eggs. Ant colonies don’t have leaders. Their abilities to build elaborate nests and do other amazing tasks as groups come from the emergent properties of individuals acting on local information. Normally they do things like that when they’re foraging. So they’ll turn foraging on and off, depending upon the colony’s needs for nutrition.

I think the movie got at that when the ants wrote numbers on the floor and made a raft and built bridges.

Yes, they should have had weaver ants building living chains and bridges, since they do it naturally. I was hoping to see them in the movie, but that’s OK.

Any other scientific quibbles?

The ants were always guys, which is not how it really works. They’re all female, except for males, which are only flying sperm dispensers that die after mating. The ant that Paul Rudd was riding—a carpenter ant virgin queen—was a female but he called her “Antony.” And when the actor climbed onto the ant the scientist said, “Put your foot on the—I think they said “node.” I think they wanted to say “petiole.”

They got thorax right.

More like mesosoma or alitrunk. It was also interesting how Ant-Man had a personal relationship with Antony. He was sad when the ant was killed. The closest thing to that I’ve seen is in the movie Phase IV. The ant colony is portrayed as having an incredible collective intelligence, which is interesting and true, or at least partially true. And they end up communicating with people through computers. The upshot is that the ants want humans to be brought into their world, instead of there being opposition between nature and humanity. So whether that was something like a latent Rachel Carson reference—I don’t know.

What do you think of having a yellowjacket as the bad guy?

Actually there’s a giant hornet in Japan that attacks honey bee colonies. There is a naturally antagonistic relationship between wasps and army ants, but ants are the predators of wasps.

Then why did they pick a yellowjacket?

Maybe because he could wear a cool yellow and black suit?

Overall, do you think the movie is good for ants or bad for ants?

I think it’s good. I was hoping there would have been more emphasis on the theme of cooperation in nature, and the important ecological role played by ants. You can’t pull ants out of an ecosystem without it collapsing. They modify and aerate soil, transfer nutrients, form mutualisms, and are important in food webs. So maybe they could have got a little of that science into it somewhere. But it’s an entertaining movie, not a documentary.

At the end, the little girl did adopt a giant ant as a pet.

Yes, feeding the ant under the table like a dog—that was a nice touch. I usually feed ants when they’re on top of the table.

A Turning Point for Ants in Cinema

A Turning Point for Ants in Cinema
7
share this