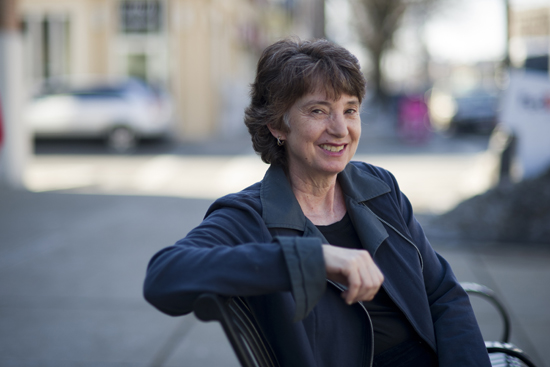 The picture remains tacked to Julie Palmer’s office wall: a female doctor and colleague from UCLA who died last year, age only 50, from lung cancer.

“I was so sad when I learned about it,” says Palmer (SPH’85), a School of Public Health professor of epidemiology who does research through BU’s Slone Epidemiology Center. “She was a Renaissance woman. She played varsity basketball at Northwestern—she was six feet tall or something like that. She wrote poetry” in between medicine and research. “A wonderful woman doing groundbreaking work out there in LA. Never smoked.”

The photo serves as a stark reminder to Palmer of a troubling fact: nonsmoking women are far more likely to get lung cancer than nonsmoking men, she says, yet lung cancer research frequently doesn’t break down data according to gender-specific factors, as evidenced by a recent study by Brigham and Women’s Hospital and George Washington University. In fact, the study found medical research in many areas, including cardiovascular disease (which kills more women than men), often includes few women subjects, or else doesn’t report results by gender. Among the report’s findings: only one third of subjects in cardiovascular clinical trials are female, and while depression is more prevalent in women than men, brain studies in male animals outnumber those in female animals five to one.

There are times when researchers should exclude certain groups, says Palmer, who with Lynn Rosenberg (GRS’65), an SPH professor of epidemiology, is a principal investigator of the Black Women’s Health Study, which researches numerous diseases in black women, a group traditionally overlooked by research. But generally, researchers must be on the lookout to include both sexes, according to Palmer, who discussed the gender bias study with BU Today.

BU Today: How in this day and age does medical research still overlook female subjects?

Palmer: It is better than it was 25 years ago, a lot better. The National Institutes of Health made a rule 20 years ago that every study the NIH funded had to say whether women and minorities were included and in what proportions, and if not, why. Still, many grants get funded without women or with only a few, but at least it pushed researchers to be more likely to include women.

It’s hard to make a law that would work, because every study is different and circumstances are different. Where researchers have not done their part is that it’s still easier or more convenient to enroll men in studies. Lung cancer and cardiovascular disease are more common in men, even though they’re very serious for women; as the report said, lung cancer is a huge cause of death in women. But more men get lung cancer than women, largely due to patterns of smoking. With cardiovascular disease, it’s largely influenced by smoking and sedentary lifestyle, and major heart disease and stroke happen earlier in men than in women. So it’s just easier to get numbers of men to be in the studies.

Is it medically justified then, in some cases, to exclude certain groups?

That’s right. One of the problems with the NIH rule is that it was interpreted to mean every study should have a mix of people. So many people design their studies to represent whatever general population they were working with, and as a result, they might have only 20 percent women, and maybe that wouldn’t be enough to analyze women separately. Many of us argued that for groups that are underrepresented, it can be more effective to design a study just in that one group.

Would a study that excluded, say, women, ever be justified if lung cancer and heart disease occur more in men, with maybe a separate, complementary study involving just women and those diseases?

There are grounds for doing that, in my view, if it’s a disease that’s uncommon in the other sex, or if there’s something very different going on in one versus the other. When we do studies of breast cancer, we only enroll women, because 99 percent of breast cancers occur in women. Male breast cancer is a different thing, and it wouldn’t be helpful to have 10 men in our study of 1,000 women. That would be a case where you would do a study just of men. But the thing about lung cancer—it’s not a good justification where the disease gender split is 60-40 or 70-30.

Why can’t medical research results be extrapolated between genders?

So you believe that fewer women might be killed or harmed by certain diseases if we had more women subjects in research?

Yes. It’s now recognized that the symptoms of heart attack can be different in men and women. The classic signs—the crushing chest pain—many women don’t have. Instead, they’ll have pain in their arm. In the old days, women wouldn’t get that immediate care that saves many lives. In cancer, women who are nonsmokers have a higher risk of lung cancer than men who are nonsmokers, and we don’t know why. So it’s important to recognize that women who are not smokers are at risk, and if they have a cough that’s unexplained, they should be screened for lung cancer.

How did you first become aware of gender disparity in medical research?

When I took my first courses at SPH in the early 1980s, the Framingham Heart Study led people to realize we need to make a special effort to enroll women. So the people at BU—the group I now work with—were some of the first to initiate studies of heart disease in women.

Will this Harvard study put this problem to bed, or is this going to be an ongoing issue?

I think the latter. Researchers are cognizant of it, and funders like the National Institutes of Health are aware of it. I was a little surprised that they have found it was as bad as it is, but I believe it. My hope is that things will get a lot better, and if they get as much better in the next 30 years as they did in the last 30 years, that will carry us a long way.

There are 3 comments on Why Medical Research Often Ignores Women