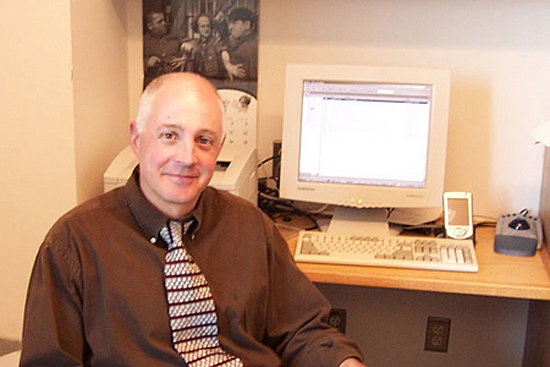 Kenneth Walsh, director of the Whitaker Cardiovascular Institute, is the lead author on a study that sheds light on the life and death of brown fat cells and illustrates the important role of brown fat in metabolism. Photo courtesy of Kenneth Walsh

White and brown fat are the yin and yang of metabolism. We’re all familiar with white fat, the squishy stuff that bulges around our waists after a few too many doughnuts. But brown fat is more mysterious. It’s the good twin—it burns energy, produces heat, and may hold clues to combating obesity.

A new study led by Kenneth Walsh, director of the BU School of Medicine’s Whitaker Cardiovascular Institute and a MED professor of medicine, sheds light on the life—and death—of brown fat cells and illustrates the important role that brown fat plays in metabolism.

The study, published in the May Journal of Clinical Investigation, shows that feeding mice a high-fat, high-sugar diet causes their brown fat cells to malfunction, a process that Walsh likens to a “death spiral.” While it’s long been known that humans lose brown fat as they age, the study is the first to describe exactly how brown fat cells “whiten,” effectively becoming more similar to white fat.

White fat looks white because it’s full of molecules called lipids, which the body uses for long-term energy storage. Brown fat has lipids, too, but it is constantly using them like fuel to stoke a fire. Brown fat looks brown because is packed with mitochondria, the tiny cellular powerhouses that burn energy to keep us warm and move our muscles. (White fat, conversely, is not very metabolically active and has fewer mitochondria.) For many years, scientists thought that brown fat existed only in small mammals like mice and in newborn human babies, who need help staying warm.

Then in 2009 scientists found that adults have brown fat, too—a few pockets in their necks and chests. Since lean people have more brown fat than obese people, the scientists suspected that brown fat might somehow play a role in gaining weight or in keeping it off.

“For years brown fat was a scientific backwater, because we thought it was only in fuzzy little animals and babies,” Walsh says. “Suddenly it became part of the adult metabolic equation. Now it’s one of the hottest topics in metabolism.”

But big questions remain: does brown fat play a significant role in adult human metabolism? Can white fat become brown? Why do we lose brown fat as we age? How exactly does brown fat whiten, and is there a way to stop it?

In the study, Walsh and his colleagues tried to tackle the last question: what is happening, on a molecular level, when brown fat turns white? To answer the question, they fed normal mice high-fat, high-sugar mouse chow—much like the average American diet—and let them eat as much as they wanted. After eight weeks, remarkable changes were apparent: the mice had gained weight (white fat, unfortunately) and become insulin-resistant—a precursor to diabetes. And their brown fat, no longer able to burn energy efficiently, had become engorged with lipids. In effect, the brown fat had begun to turn white.

“You take a normal lab mouse, give it a fast-food diet full of fat and sugar, and it throws them out of whack,” says Walsh. “It totally confuses their metabolism.”

What happened? By studying tissue and blood samples from the mice at different times after starting the fast-food diet, Walsh and his colleagues teased apart the chain of events that led to the demise of brown fat. First, they discovered, the unhealthy diet led to high level of toxic fatty acids in the brown fat. This led to the malfunction of a gene called VEGFA (vascular endothelial growth factor A), which helps control the growth of blood vessels in adult tissues. Without a well-functioning VEGFA gene, blood vessels feeding the brown fat shriveled and disappeared, sharply reducing its blood supply. Deprived of blood, and thus oxygen, the mitochondria in the brown fat cells couldn’t burn lipids efficiently, so the fuel began to pile up. The result: brown fat turned white. “It was a pathological cascade, a death spiral,” Walsh says. “Metabolic dysfunction led to the loss of blood vessels, and blood vessel loss impaired brown fat, leading to more metabolic dysfunction. What was really surprising is that the white fat was minimally affected by blood vessel loss, but the brown fat disintegrated.”

Then came the rescue attempt. Walsh and his colleagues used a virus to insert the gene for VEGFA into the brown fat of obese mice. The infusion of VEGFA didn’t bring the mice back to normal, but it had a restorative effect: the mice’s blood vessels stopped withering, the brown fat perked up and improved its function, and the insulin resistance improved.

It’s too early to say whether this work may eventually lead to new treatments for obesity in humans. But it does shed light on the critical role that the growth and atrophy of blood vessels may play in the maintenance of brown fat, and it demonstrates the rapid tumble toward metabolic dysfunction and obesity once brown fat starts to fail. The new knowledge gives clues for potential targets and treatments. By some predictions, half of the American population will be obese by 2050. To reverse the obesity epidemic, we may need all the clues that science can offer.

Barbara Moran (COM’96) is a science writer in Brookline, Mass. She can be reached through her website WrittenByBarbaraMoran.com.

There are 2 comments on The Brown Fat Death Spiral