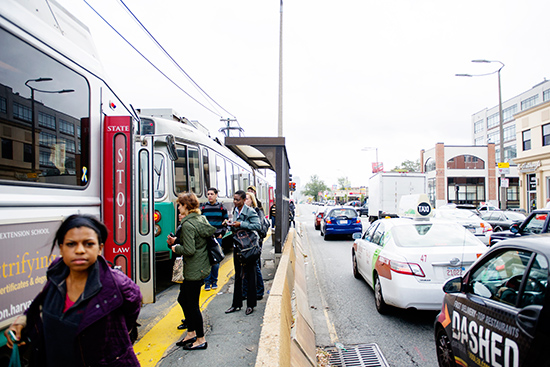 A meeting will be held tonight to consider an MBTA proposal to consolidate four Green Line B trolley route stops to two, from the BU West stop to the Babcock Street stop (pictured above). Photo by Jackie Ricciardi

First the good news: in the future the T may move a little faster along the stretch of Commonwealth Avenue that is the spine of the Charles River Campus. Now the bad news: BU students may also have to walk a little farther to catch the T. A proposal by the MBTA to eliminate four Green Line B trolley stops and replace them with two new stops will be presented tonight during a public meeting at the Boston Public Library in Copley Square.

Under the plan, the MBTA would close the stops at BU West, St. Paul Street, Pleasant Street, and Babcock Street, and create two new stops—one just west of the current BU West stop and one between the existing Pleasant Street and Babcock Street locations. The plan is part of a proposed redesign of Commonwealth Avenue that would include a widening of the meridian to provide better access to the T, more left-turn lanes, and narrower sidewalks; it may also include redesigned bicycle lanes.

The four stops slated for consolidation are all within a half-mile stretch of campus, and just a tenth of a mile separates the BU West and St. Paul stops.

The MBTA says that the proposed plan, which has been in the works for four years, would help reduce travel times and improve safety. Federal funding for much of the project is available only until fall 2015.

News of the proposed changes to the B Line, notorious for its slow service, was met with a largely positive reaction from BU students.

“It will speed up the process of getting to Kenmore,” says Kelsey Young (COM’15), who lives near West Campus, site of the proposed consolidation. “I take the T to my internship, and it’s exciting that I could now get to Kenmore that much faster.”

“I think it will make me take the T more,” says West Campus resident Daniela Sanchez (CAS’16). “Right now, it just stops too much.”

Not everyone is enthusiastic about the proposed changes, however. “I don’t think it’s a good idea,” says Alejandra Flores (ENG’18). “I’m just thinking of the winter, when it’s colder and you have to walk a little bit further.”

During tonight’s public meeting, MBTA personnel will discuss the history of the consolidation project, cost and funding for the design and construction, elimination of the existing stops, locations for the proposed new stops, safety upgrades, and improved customer service. MBTA personnel will also be available to answer questions. The possible alterations to bike lanes will not be discussed at this meeting.

T May Eliminate Two Green Line B Stops
51
share this