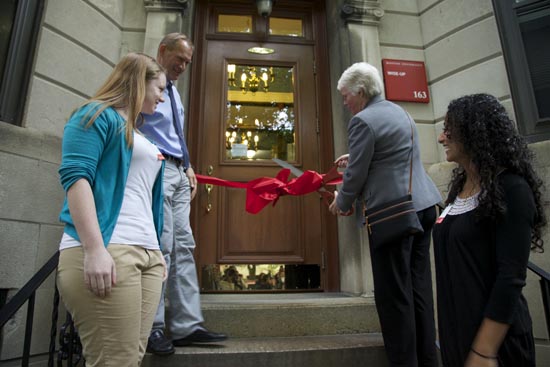 With hours to go before a big organic chem test, several female students are holding a powwow in their Bay State brownstone, trying to understand how carbon-containing compounds react. It’s just another night at WISE-UP House, the specialty community residence for female STEM (science, technology, engineering, and math) sophomores, juniors, and seniors that opened in September to much celebration and support.

“It’s important to have a community of other women when you’re studying in the STEM fields,” says resident assistant Iriny Ekladious (ENG’17), a second year graduate student. “It can be intimidating, and women often feel outnumbered. Having a community like this gives students confidence and empowers them to say, ‘I’m good at this and I can do this,’ despite all the hurdles.”

What are the hurdles? According to a recent National Science Foundation (NSF) report, in 2011 men earned the vast majority of bachelor’s degrees awarded in engineering, computer sciences, and physics, despite the fact that women outnumber men in undergraduate education. Since 2000, the number of bachelor’s degrees in computer sciences earned by women has declined by 10 percent, in mathematics by 5 percent, in physics by 2 percent, and in engineering by 2 percent.

In 2007, in an effort to create more support for women planning to major in STEM programs, BU opened a specialty community residence floor for freshmen in Warren Towers, WISE@Warren. That project produced impressive results. A longitudinal seven-year study found that WISE@Warren participants were nearly 50 percent more likely to graduate in STEM fields and 30 percent more likely to graduate from BU in four years than a matched cohort of women in STEM fields overall, says Bennett Goldberg, director of BU’s STEM Education Initiatives and a WISE-UP House faculty advisor.

Goldberg, a College of Arts & Sciences professor of physics and a College of Engineering professor of biomedical engineering, points to studies that show that “living and learning communities are supportive, and create a sense of belonging and ownership associated with a student’s academic choice. Students feel supported even though they are minorities in the classrooms and labs in which they work.”

The freshmen living on WISE@Warren were so enthusiastic about living together and bonding as a community that they sought to create a similar female-focused STEM community for upperclassmen as well. Program participants petitioned to expand the program, and Goldberg and fellow faculty advisor Linda Doerrer, a CAS associate professor of chemistry—currently on sabbatical—proposed the idea and received support from Housing, the Office of the Provost, Facilities Management & Planning, and the Dean of Students. “After a year, we were designated a place, and two years after our initial proposal, it opened last fall,” Goldberg says.

Like WISE@Warren, the specialty house, at 163 Bay State Road, has weekly group house meetings as well as lectures and events, such as a trip to this year’s National Symposium for the Advancement of Women in STEM, held at Harvard, and a workshop to prepare students thinking about entering medical, dental, veterinary, or another health-related school. The house has a new mentoring program, where undergrad residents pair up with a grad student enrolled in the same STEM field.

WISE-UP House accommodates 21 women majoring in fields as diverse as physics, mathematics, electrical engineering, chemistry, molecular biology, and human physiology. Many current residents previously lived on WISE@Warren. Just months after opening, WISE-UP has become a popular housing option; according to David Zamojski, director of residence life and an assistant dean of students, 51 students have applied to live there next year.

“What I like about WISE-UP is that when you’re really stressed, the people in the house completely understand, and if you need to stay up late to do work, you have someone studying right alongside you,” says Felicia Estrada (CAS’16). “And sometimes you’ll just come home and see someone’s face and right off the bat say to them, ‘You had an exam today, didn’t you?’ We get it.”

And residents say that the women-only policy has other advantages as well. “I feel like if this was a coed science house,” says Jaime Lynne Collins (CAS’16), “there might be more instances of subtle asides or backhanded compliments from guys, like ‘Oh, that’s funny, you do get that.’ No one does that here.”

Many University programs are aimed at increasing the representation and success of women in science and engineering; in fact, from 2006 to 2013 the University’s STEM retention initiative PROSTARS received $1.7 million from the NSF’s STEM Talent Expansion Program.

“Women in science face different challenges than men in science do,” says Kathryn Vessel (SAR’16). “We have a lot of obstacles and barriers to overcome, but we grow by being all together.”

Specialty Residence for Women in Science and Engineering

Specialty Residence for Women in Science and Engineering
2
share this