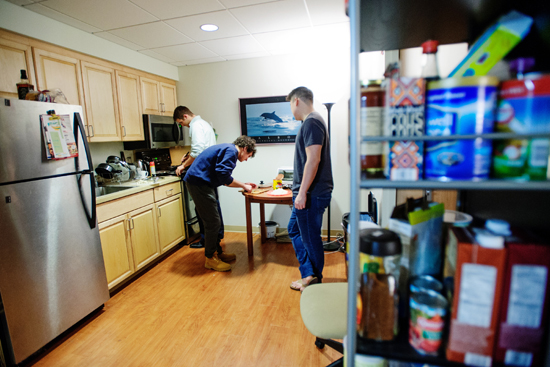 At 6 feet and 200 pounds, Fabian Chang must fuel an ample frame for the grind of medical studies. Yet for one week in December, he ate only what he could buy for $30. That’s the average weekly benefit paid nationally under the federal food stamps program, says the School of Medicine student, whose week was an odyssey in belt-tightening.

Chang (MED’16) conceived this “SNAP challenge” (SNAP—Supplemental Nutrition Assistance Program—is the food stamps program’s formal name) for himself and others on the Medical Campus, and during last month’s weeklong regimen, he didn’t go hungry. But he discovered, as have families on food stamps, that fending off an empty stomach means making do with a malnourishing menu. His fresh food ran out by day five, leaving him to end the week subsisting on eggs, bread, rice, and pasta.

“I was able to get enough food,” he says, “but it was definitely difficult to maintain a healthy diet.” And with the expiration of the portion of the Obama stimulus devoted to SNAP, things like coffee were an unaffordable luxury.

In advance of continued congressional debate over whether to cut SNAP, about 15 MED students and deans took the SNAP challenge, sponsored by the school’s Student Nutrition Awareness & Action Council. The goal was to raise future doctors’ awareness of the nutritional challenges faced by poor patients.

Boy, was it raised.

“My body feels BAD,” one participant wrote on a blog set up for the experiment, after just two days on her regimen. “I’m not sure if the food has gone bad or was low-quality to begin with, but after my lunch of beans and meat yesterday around 3 p.m., I felt physically ill at school and had to come home to take a break and drink lots of water. I also notice that because my meals aren’t nutritious, no matter how much I eat, I don’t ever feel satisfied.” Another blogger reported that the experience prompted her to volunteer at a food bank.

Indeed, while few Americans starve—there’s an obesity epidemic, notes SNAP challenge taker Dan McGrail (MED’16)—shopping becomes stressful on a tight budget. “It is really difficult to walk through the store and pass up on items like bread because you think it will put you over budget,” McGrail says. “It is a challenge to obtain a healthy meal.” (A Harvard study corroborates the unhealthy aspects of eating under the constraints of SNAP, while also noting that it is possible to go hungry on the program: recipients may run out of food at month’s end, since benefits are paid at the start of each month.)

Before embarking on the challenge, Iris Trutzer (MED’21) confessed to feeling terror at a mere $30 budget, mitigated only by the fact that she knew she’d be able to eat normally again after seven days. “We all have to keep in mind that we’re not living like a person who lives on SNAP benefits,” she said. “We’ll be off this in a week, and we’re also living with a full kitchen in a house that has heating and no utilities insecurity, no housing insecurity. So we’re doing this very much in a vacuum.”

While student participants interviewed hoped to increase awareness of how paltry the SNAP food allotment is, their main goal was to show their aspiring-doctor peers that the condition of malnourished patients is not necessarily the patients’ fault. “Increasing the empathy of future health care providers—understanding where patients are coming from, the challenges they face—will hopefully help us be better providers of care,” McGrail says.

“For some of our kids in our clinic, SNAP can be a lifeline,” says Megan Sandel, a MED associate professor and a pediatrician at Boston Medical Center. Some of her patients have had problems ranging from inactivity to disruptive school behavior after their families’ food stamp benefits were cut, she adds.

Chang borrowed the one-week-on-SNAP idea from U.S. Senator Cory Booker (D-N.J.), who had done it while serving as mayor of Newark, N.J. It has been an education unlike that of medical school, teaching Chang the fine art of food budgeting: “The cheapest meat pieces are these chicken leg quarters that are like a dollar a pound.…If you budget those chicken quarters, you can get two meals out of them.” Frozen and in-season vegetables are also good buys, he discovered, but “fruits are a luxury.”

Canned beans, a good protein source, are more expensive than dried ones, but don’t need cooking, he notes. But he’s also learned that splurging to save a night’s cooking is a privilege denied those on SNAP.

“If you’re on that tight budget of $30, you have to cook every meal,” he says. “It gave me a level of understanding about people who may be at the poverty line who are struggling to make ends meet, and they might have two jobs—where do they find the time to cook all the food and plan?”

There are 22 comments on SNAP Judgment