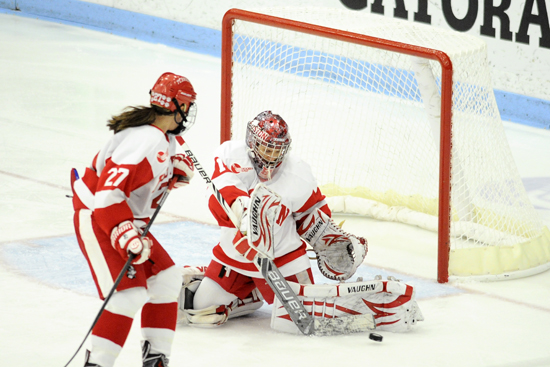 When Kerrin Sperry takes the ice with the women’s hockey team tonight she will set a record unmatched by any player in BU history: she will be the first goaltender to start in 112 games. It is just the latest accolade for the veteran goaltender, who has led BU to two consecutive Hockey East championships, played in two national title games, and set nearly every program goaltending record. Even more impressive is managing this while juggling ROTC training and challenging academics.

Growing up in North Reading, Mass., Sperry (CAS’13, GRS’16) loved to figure skate with her family at a nearby arena. But she was fascinated by the hockey players who took to the ice afterward, falling in love with the speed of the game.

“I had to beg my parents to let me play,” she recalls, “and it took even more convincing for them to let me play goalie, but eventually they came around, and that’s been my position ever since.”

In high school, she also played field hockey, and while she enjoyed it, she considered it cross-training for ice hockey. So when it came time to choose a college, she says, the “opportunity to come here and fight for a starting goalie spot while obtaining an incredible education put BU above the rest.”

Sperry was undefeated in her first 18 starts as a freshman and finished 7th in the nation with a .939 save percentage. It was an auspicious debut. Since then she’s continued to win numerous honors, including being named Hockey East Tournament MVP last season.

She is a team leader—a role she seems to come to naturally—who wears a bracelet engraved with the words “self-discipline.”

“As a goalie, you’re in a natural position of leadership,” she says. “You’re placed in a position where you have 60 minutes to solve a problem with your teammates. That’s why I push myself so hard academically, because if things are shaky off the ice, you aren’t going to be able to perform as well on the ice, and goaltending is all about stability.”

Sperry’s academic career has mirrored her career on the ice. It took her just three years to complete an undergraduate degree in political science. She is currently pursuing a master’s in international affairs. And this fall, she began Army ROTC (Reserve Officers’ Training Corps) training. She acknowledges that “it’s been a tough schedule squeeze,” but “if all goes as planned, I’ll be a commissioned officer at the end of my two-year program.”

More immediately, Sperry says, her ROTC experience has made her a better leader on the ice. “I think ROTC has had an effect on my game because my instructors often talk about putting your soldiers first, and making sure they have what they need to succeed. So this year, I’ve really started putting my teammates first. Instead of focusing on whose fault the previous goal was, I think about what we’re going to do on the next play, and I think that has helped the younger players play more relaxed in front of me.”

“Kerrin is an extremely competitive person who always strives for the best,” says team assistant captain Kaleigh Fratkin (COM’14). “She has a very determined attitude, and it shows on and off the ice, but her leadership has grown each year. Like most players, she has matured into a confident and reliable player for this team, and she’s become even more prominent this year because of how the younger players look up to her.”

Thanks in part to the outstanding play and leadership of their goaltender, the Terriers are currently one point behind Boston College for first place in Hockey East and are ranked eighth in USA Today’s national polls. They’ve earned a 9-1 record in conference play and are 16-4-1 overall, making another run to the NCAA Frozen Four a distinct possibility.

“This may be the most cohesive group I’ve ever been a part of,” Sperry says. “There are issues here and there, but if everyone brings their best game, we’re going to have a very good shot at making another title game.”

It would be a fitting end to an illustrious athletic career that saw Sperry set records for saves, shutouts, and wins. And while she’s anxious to begin her military career, she’s determined to enjoy her final season on the ice.

“I am going to miss it,” she says. “I hope I find the feeling that hockey gives me in my career or in anything else I do in life. I often tell the younger goalies that they shouldn’t look too far ahead and should enjoy the moment, because I think we all understand that we’re part of something special here.”

The BU women’s hockey team travels to Providence College to take on the Friars tonight, Friday, January 17, at 7 p.m. The Terriers host Northeastern University at noon on Sunday, January 19, at Walter Brown Arena, 285 Babcock St. Tickets are $6 for the general public, $4 for students, faculty, staff, children, and senior citizens.