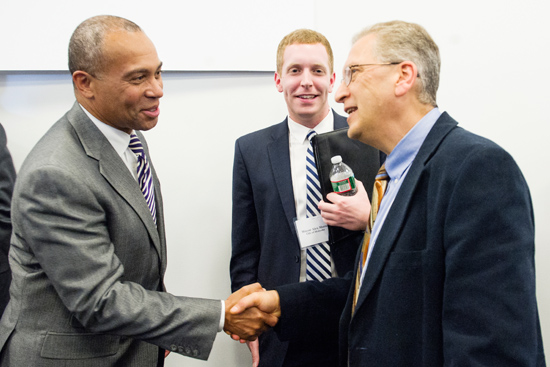 Massachusetts Governor Deval Patrick (from left), Alex Morse, mayor of Holyoke, and Azer Bestavros, director of BU’s Rafik B. Hariri Institute for Computing and Computational Science & Engineering, at the announcement Friday of a $3 million grant from the commonwealth for the BU-led Massachusetts Open Cloud project in Holyoke. Photo by Jackie Ricciardi

With the governor of Massachusetts pledging $3 million in state support, BU leaders Friday announced plans for development of a pathbreaking computing cloud that could spur economic growth and technology innovation.

Azer Bestavros, director of BU’s Rafik B. Hariri Institute for Computing and Computational Science & Engineering, says the University will spend the next three years developing software for the Massachusetts Open Cloud (MOC) in collaboration with the commonwealth, technology companies, and BU’s university partners at the Massachusetts Green High Performance Computing Center (MGHPCC) in Holyoke, where the announcement was made.

In cloud computing, users rent access to massive off-site computational power. Companies such as Amazon and Google offer clouds; like those, the MOC would be public, meaning anyone could purchase computing power. But unlike those closed clouds (each operated by a single provider), the MOC would be open to multiple vendors of software, hardware, and computer services, all of whom would have access to operational data about the MOC: what programs were running on it, as well as any performance or problem reports.

No such public, open cloud currently exists. “The MOC will be the first realization of this model,” says Orran Krieger, director of the Cloud Computing Initiative at the Hariri Institute, who will lead the MOC development. “If it’s successful, we expect other clouds to follow our model, fundamentally changing the nature of cloud computing.” Krieger is also a College of Arts & Sciences research professor of computer science.

The plan calls for hosting the MOC at the MGHPCC data center, where it would tap the computational power of BU and its MOC partners, who have jointly contributed $16 million to MGHPCC, leveraging the $3 million matching grant from the state. Besides the participating universities, MOC partners are tech firms Red Hat, Cisco, EMC, Juniper Networks, SGI, Mellanox, Plexxi, Riverbed, Enterprise DB, Cambridge Computer Services, and DataDirect Networks.

“Investing in innovative sectors that are becoming a prominent part of our economy is critical to meeting the demands of the 21st century,” says Greg Bialecki, Massachusetts housing and economic development secretary.

Bestavros, who is also a CAS computer science professor, compares the MOC to a shopping mall, whose physical mall would be the MGHPCC, eliminating the expense of building a separate data center. And with the MGHPCC’s university partners doing research that could use the MOC, the Holyoke center is “a little petri dish in which the MOC could develop,” says center executive director John Goodhue.

The MOC’s corporate partners would be the equivalent of mall stores, selling their products and services at the Holyoke center. Banding together in a mall-like organization would permit them collectively to draw enough traffic, leveraging economies of scale, Bestavros says. The vendors’ customers would range from academic researchers to corporations and others. For example, Harvard is one of the MGHPCC partners helping to develop the MOC; its Research Computing arm, the conduit to computing services for the Faculty of Arts and Sciences, is planning on using the MOC as “one part of our strategy to provide lasting computer resources to our faculty and researchers,” says James Cuff, Harvard’s assistant dean for research computing.

The MOC concept of a cloud marketplace grew out of BU research in 2009. In a recent paper, Bestavros and Krieger argue that closed clouds usually have a single provider, who “alone has access to the operational data.” For this and other reasons, they write, “in the long run, if only a handful of major providers continue to dominate the public cloud marketplace, then any innovation can only be realized through one of them.”

With a cloud designed like the MOC, their paper says, “many stakeholders, rather than just a single provider, participate in implementing and operating the cloud. This creates a multisided marketplace in which participants freely cooperate and compete with each other, and customers can choose among numerous competing services and solutions.”

Another advantage: an open cloud would be more secure than a closed one, Bestavros and Krieger say. It is “the best way to make sure that software is clean,” according to Bestavros, especially as American tech companies complain that federal computer snooping might scare off billions of dollars’ worth of cloud computing customers. With a public, open cloud like the MOC, “the National Security Agency cannot put backdoors in an open-source code, because you can see what the software is doing,” he says.

The state money is a matching grant from the Massachusetts Technology Collaborative, and it will pay for developing software and equipment for the MOC. “The commonwealth’s participation allows BU to create a neutral ground that allows the industry and university partners to collaborate in an area where they also compete,” the MGHPCC’s Goodhue says. That is, the money will pay for development of software that all the MOC investors can use, so that “no partner will be advantaged more than any other.”

Patrick Larkin, director of the Innovation Institute at the Massachusetts Technology Collaborative, the source of the state grant, says the MOC will be “a virtual sandbox that will empower the commonwealth’s researchers, start-ups, industry, and the public sector to explore, develop, and release big data and cloud computing innovations.” Those innovations could spur discoveries spanning the state’s economy, he says, “such as transportation, health care, energy, finance, life sciences, and manufacturing.”

There are 2 comments on Pioneering a Cloud Computing “Mall”