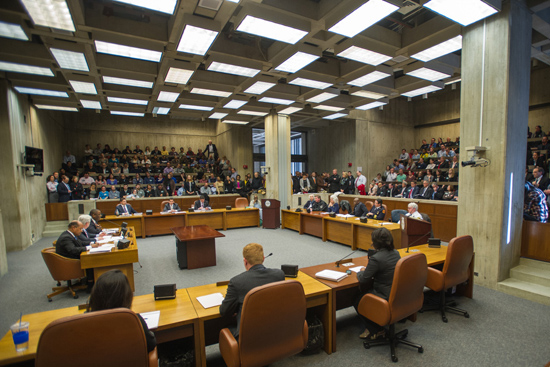 Proponents and adversaries of Biosafety level 4 research filled the chambers of the Boston City Council during a hearing on April 16. Photo by Cydney Scott

Both the Boston City Council and the Massachusetts Superior Court yesterday took actions that move Boston University’s National Emerging Infectious Diseases Laboratories (NEIDL) closer to full operation. The City Council voted down a proposed ordinance that would have banned research at Biosafety Level 4 (BSL-4) in Boston, and the Superior Court rejected a challenge to a risk assessment by the National Institutes of Health that had found that NEIDL poses minimal risk to the community.

The City Council voted eight to five against a proposal to ban BSL-4 research, which four weeks ago was the subject of a marathon standing-room-only debate that pitted Councilman Charles Yancey, the ordinance sponsor, and other opponents of BSL-4 research against representatives of the biotech industry and Boston University.

Michelle Consalvo, BU assistant vice president for government and community affairs, says she is grateful for the outcome. “The council was very thoughtful and very thorough,” Consalvo says. “At the end of the day it was the safety measures and the security of the building that carried the vote.”

Yancey was unavailable for comment and did not return telephone calls.

The Superior Court decision by Judge Janet Sanders removes the final legal hurdle to full operation of the lab, although NEIDL must still obtain regulatory approval from the Boston Public Health Commission before it can conduct research at BSL-4. In her 19-page decision, Sanders wrote, “Certainly, the process that was followed in order to make the risk assessment was a thorough one….When assessing the risk…the report assumed that in each scenario, everything that could go wrong would go wrong; it then calculated the risk that this could happen using a specific methodology.”

Last year, an earlier challenge to the NIH risk assessment, which focused on research at Biosafety Level 3 and BSL-4, was rejected by US District Court Chief Judge Patti Saris. Saris ruled that the contested Final Supplementary Risk Assessment was sound, and that the planned research could be conducted safely at the BU Medical Campus site in Boston’s South End. The risk assessment examined a series of scenarios and potential consequences of procedural failures, including containment system failures and malevolent acts.

In March of last year, the Massachusetts Secretary of Energy and Environmental Affairs gave approval for the lab to conduct research at BSL-3 and BSL-4. Since then the lab has received additional required approval for BSL-3 research, and scientists at the lab are now gearing up for BSL-3 tuberculosis research that could someday stem the disease’s lung lesions in humans and prevent TB transmission by coughing.

Construction of the $200 million NEIDL facility was completed in September 2008, but controversy and litigation have kept much of the building’s 192,000 square feet of laboratory space closed. The lab is part of a national network of secure facilities dedicated to the development of diagnostics, vaccines, and treatments to combat emerging and reemerging infectious diseases.