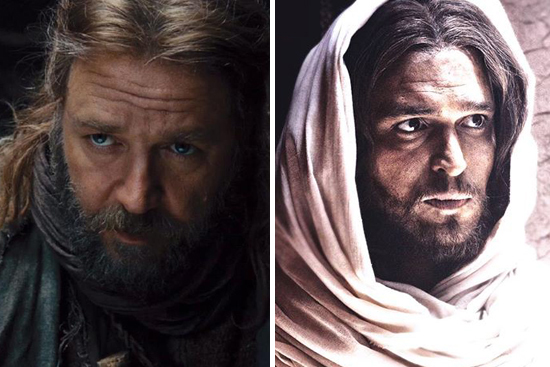 Biblical films this Lent feature Russell Crowe as Noah (left) and Diogo Morgado as Jesus. Photo courtesy of Noah and Song of God

Dusted Christian foreheads this Ash Wednesday aren’t the only herald of Lent, the liturgical run-up to Easter. A pair of big-budget films with biblical themes also greets the season: Son of God, based on a popular History Channel series, premiered with hefty grosses last week, while later this month, Russell Crowe portrays Noah.

Why has Hollywood gotten religion? Simple, says Regina Hansen: that’s where audiences’ interest and money are. “People know that the world is in tough shape—climate change and economic issues. And also, there are wars being fought over religion,” says Hansen, a College of General Studies senior lecturer in rhetoric, who studies film and television depictions of religion—particularly supernatural films and particularly Roman Catholicism, her own faith. She has belonged for several years to the International Association for the Fantastic in the Arts, a scholarly organization devoted to the study of the fantastic.

Hansen brings that Catholic perspective to the cineplex. A decade ago, she saw The Passion of the Christ, a film produced by archconservative Catholic Mel Gibson that glorified and gore-ified Jesus. She remembers her anger at a mother who dragged her young child to the violent movie; more tellingly, she recalls the busloads from evangelical churches who cried throughout. She thought at the time that this is just the Stations of the Cross she’d performed as a Catholic, albeit in gratuitously bloody fashion. The one scene that did bring her to tears came when Jesus stumbled on the way to Golgotha, and his mother, Mary, (especially venerated by Catholics) sees him in her mind’s eye as the little boy she once cuddled. “That seemed the most Catholic moment in the film,” Hansen says.

Does Hollywood dig or diss Catholicism? We asked Hansen, who expects her latest book, Supernatural, Humanity and the Soul: The Highway to Hell and Back (Palgrave Macmillan) to be published this fall.

Hansen: It’s not the only religion that shows up in horror films, but it’s the one whose symbols are the most resonant. Everybody recognizes them; they still seem to be exotic. It’s a daily acceptance of a metaphysical world. You go to Mass on Sunday, you’re accepting that there’s a world beyond the physical. Certainly, a priest believes what he’s doing. They’re on a desert island, they have to say Mass. They’re sort of these heroic characters, though they’re less heroic now. There’s as much anticlericalism since the pedophile scandal.

So conservative Catholics have a point that film and TV produce a negative portrayal of Catholicism?

I’m not sure I agree. There are negative portrayals of priests and Catholicism in film and television, but I wouldn’t necessarily call them anti-Catholic. Being anti-Catholic means you hate the Church, you want to undermine it, as opposed to, this particular priest happens to be evil. There are a lot of portrayals of priests as ineffective in their attempts to fight evil. The second X-Files film was about this priest who was a pedophile, who was trying to redeem himself. Nobody was listening to him. You got the sense the filmmakers recognized a person who was actually trying to atone. At the end, the priest turns out to have been correct about evil goings-on, and the character of Fox Mulder, who’s not Catholic, does say, well, maybe he did atone. They have the Catholic character, Dana Scully, not wanting to accept anything about this guy because of the horrible things he did.

I do think the anti-Catholic charge is overblown. I think that some people don’t like Catholics, on the right or the left; I’m thinking more news media–wise—editorials that sometimes seem to have a limited understanding of the actual faith. I don’t think it’s a Hollywood thing. People just want to make money. Oooh, those people have exorcists, let’s put that in a movie.

Catholicism also has a long intellectual history, which includes science. Have Catholicism’s efforts to reconcile science and religion been portrayed?

Sure. Even medieval Catholic friar and saint Albertus Magnus would talk about whether there were dragons, but you have to have proof. He didn’t take it on faith—show me the proof. The character that most shows that is Dana Scully in The X-Files, because she’s a scientist and she works completely from reason, but she leaves room open for something else. She can hold two ideas in her head at the same time.

What about Doubt—was that positive or negative?

I think that’s a really balanced portrayal. You’ve got the nun, played by Meryl Streep, and a priest, played by Philip Seymour Hoffman, rest his soul. She suspects the priest of being a pedophile. It’s called Doubt for a reason, because we never really do know whether he did it or not. It’s almost an anticlerical thing as opposed to anti-Catholic. The nuns are having meager meals, and the priests are having whatever they want. There’s this class system within the Church in which the females, the nuns, have a harder life. The priest is aware of his power over her, and he’s portrayed as a bit arrogant.

How many films and TV shows are not interested in the supernatural, but try to portray a realistic, everyday experience of Catholicism?

A lot of comedy shows do that. Everybody Loves Raymond would show a Mass, and they’d have the old ushers in the back who never actually go sit. Shows of the same ilk, sort of working class people who go to church on Sunday or talk to the priest about something. The King of Queens has the same thing. It’s a rich cultural history.

How was the History Channel series as a portrayal of religion?

It’s a faithful rendition of the New Testament—I only saw the New Testament part—all the way through the Acts of the Apostles. They do the martyrdom of Stephen, which is really violent. I think it was popular among evangelicals.

Is Hollywood’s treatment of religion a topic that your colleagues take seriously or frown upon as pop culture?

My colleagues are great, because they’re interested in everything at BU and in the Association for the Fantastic in the Arts. The fact that something as popular and cult as TV’s Supernatural uses and resonates with texts that go back thousands of years—I think that’s worth study. I mean, The Exorcist—they knew everything about Catholicism. And that was a horror movie. Sometimes in the horror genre, they know more about it than other genres.