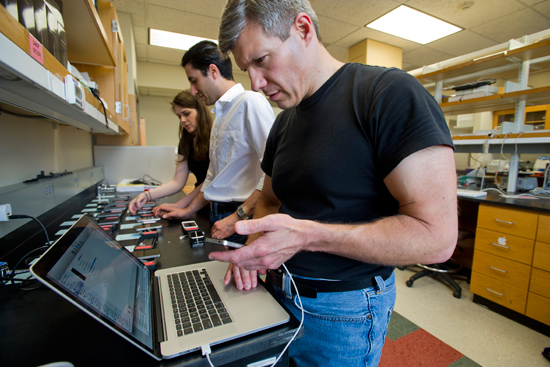 A wearable artificial pancreas codeveloped by BU’s Ed Damiano and Firas El-Khatib has been shown to automatically manage type 1 diabetes, for which patients currently check their own blood sugar levels and determine the amount of insulin needed. In two five-day trials, one involving 32 adolescents and one involving 20 adults, the system of components performed better than conventional pumps on several measures, including the average blood sugar levels over the five-day period in both adults and adolescents, the average number of interventions among adolescents, and the amount of time that glucose levels fell too low among adults. The so-called bionic pancreas consists of a glucose monitor, a pump for insulin and another for glucagon, and an iPhone that runs the algorithm that autonomously computes how much insulin or glucagon to administer at a given time. The results of the studies, which Damiano, a College of Engineering associate professor of biomedical engineering, and El-Khatib, an ENG senior research scientist, conducted in collaboration with endocrinologist Steven Russell at Massachusetts General Hospital (MGH), were published this week in the New England Journal of Medicine and reported June 15 at a meeting of the American Diabetes Association in San Francisco.

“This was a very ambitious study,” says Damiano. “It was the first test of our mobile device, and it allowed subjects to walk around Boston. They could visit restaurants, museums, and shops. It really let people be themselves.”

Damiano, whose 15-year-old son was diagnosed with type 1 diabetes at the age of 11 months, was first motivated to build a bionic pancreas by the fear that the child’s blood sugar would dive while he was sleeping, a potentially fatal event known as dead-in-bed syndrome. He made it his goal to get his device through Food and Drug Administration (FDA) clearance around the time his son leaves for college in 2017.

Type 1 diabetes, which affects about two million people in the United States, is an autoimmune disease that destroys the pancreatic cells that normally produce insulin, a hormone that allows the body to convert carbohydrates into energy. Instead of being put to work by muscles, the sugars build up in the blood, creating a toxic combination that if treated poorly over many years is almost certain to damage organs such as the kidneys and eyes, as well as blood vessels and nerves.

Daminao and El-Khatib first began testing their invention in pigs in 2005, carefully fine-tuning the algorithm to churn out immediate and precise responses to the wild fluctuations in the pigs’ blood sugar. In spring 2006, Damiano gave a talk about their work at the Joslin Diabetes Center in Boston. When he left the podium, he was approached by Russell, who said he wanted to help bring the technology to humans.

In 2008, with assistance from the Wallace H. Coulter Foundation, the Banting Foundation, the Juvenile Diabetes Research Foundation, the Helmsley Charitable Trust, and the National Institutes of Health, Damiano, El-Khatib, and Russell began a series of human trials. In the first of these, 11 study subjects stayed in a hospital room with an IV in each arm for one day and one night and ate three high-carb meals. The first-generation version of the system controlled the subjects’ blood glucose for 27 continuous hours and used blood glucose sampled from one of the IVs as the input signal to the control system.

A second study, launched in 2010, used the second-generation version of the system, which relied on glucose levels sampled from a continuous glucose monitor placed just under the skin. Adult subjects spent two days in the hospital and had their glucose controlled for 51 continuous hours, eating six meals and doing the kind of light exercise that would send their glucose downward.

Damiano, El-Khatib, and Russell are beginning a second summer camp study, this one with preadolescents 6 to 11 years old. Over the course of the next year, they will conduct an even more ambitious study, involving 40 adults at four different sites: MGH, the University of Massachusetts Medical Center, Stanford University, and the University of North Carolina at Chapel Hill. That study, a series of eight-week trials at each site, will allow participants to live at home, go to work, and travel up to one hour from the testing sites.

Damiano says this ambitious living at home study will mark the end of the useful life of the current iteration of their mobile device. The research team is planning a final, pivotal, study, which will involve several hundred subjects, who will use a new version of the bionic pancreas for several months. The new version of the device will integrate the three components of the current system into a single apparatus.

And no, he says, he is not backing off the deadline he set for himself several years ago.

“We hope to complete the study of the integrated device in 2016, and apply to the FDA for premarket approval early in 2017,” he says. “We are still hoping for FDA clearance by the second half of 2017.”