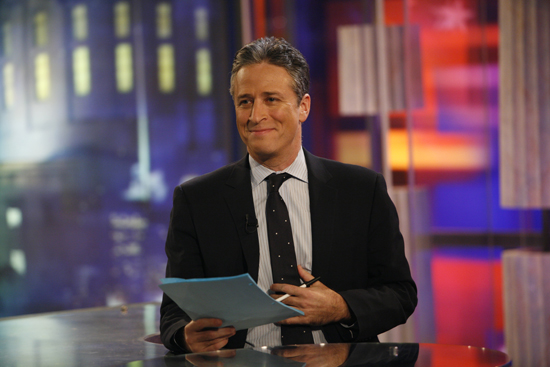 Conventional wisdom holds that the key to finding a job is who you know. So it stands to reason that if you happen to meet Jon Stewart, host of The Daily Show and he mentions your job hunt on air to two million viewers, that hunt just got easier. That’s what Adam Even Engel is hoping.

So just how did Engel (CAS’12) enlist the help of the Emmy-winning Comedy Central show host in his quest?

Over the Martin Luther King, Jr., holiday weekend, Framingham, Mass., native Engel visited friends in New York City and scored free tickets, advertised on Twitter, to the Monday Daily Show taping. Having attended a previous taping, Engel knew that Stewart spends a few minutes taking questions from the 200-person audience before a show is taped. Engel prepared a question he wanted to ask in advance in the hope he’d be the first person to get Stewart’s attention.

“During the Q&A, I told him I was a recent college grad and asked how to get my Jewish mother off my back about getting a job,” says Engel. “Stewart laughed, and he immediately shot back, asking what my mother’s religion or gender has to do with it. He was kidding, and went on to ask me what I majored in and where I went to school, and when I told him, he said, ‘BU is a really good school.’”

Since graduating in May 2012 with a degree in chemistry, Engel has worked at several part-time jobs, including substitute teaching, running an a cappella workshop at an elementary school in Arlington, Mass., and teaching music in Nicaragua, but hasn’t had much luck landing a full-time position. Influenced by Binyomin Abrams, a College of Arts & Sciences senior lecturer in chemistry, his long-term goal is to teach high school chemistry.

Currently in the process of applying to graduate schools, Engel estimates he’s applied for dozens of positions across the country in a variety of fields—chemistry, computer science (his minor at BU), music. “It’s been really frustrating, receiving rejections from some places or having my applications ignored,” he says.

Stewart told Engel he had studied chemistry himself during his first two years of college before switching to psychology. “He said he changed because in chemistry they want the right answer, but in psychology they just want an answer,” Engel says. “Stewart then asked me why I haven’t found a job teaching chemistry yet, saying he was sure there were people looking for a young teacher who’s passionate. Normally his responses to these questions are really short, but we had a dialogue going.”

Soon after the show’s taping got under way, Stewart made a plea on his behalf in front of millions of viewers, catching Engel by surprise.

Stewart didn’t mention Engel’s name nor did the camera show his face, but during a break in the show, a show producer asked him for his name and phone number in case someone called with a job lead.

Engel says his brush with fame has encouraged him to keep chugging away at his applications for both jobs and graduate school. “Now I have another reason—all of these viewers on my case,” he says, adding that he is forever indebted to Stewart. “I had no idea he would do that.”

See the full Daily Show episode here. The clip appears at the beginning of the show.