On Tuesday, the city of Boston will pause to recall the tragic events of last April 15, when two bombs went off at the Boston Marathon finish line. The explosions took the lives of three bystanders and injured more than 260. One of those who died was BU graduate student Lu Lingzi (GRS’13).

As we prepare to mark the somber anniversary, BU Today reached out to members of the BU community and asked them to share, in their own words, their memories of last year’s Marathon and the days that followed. 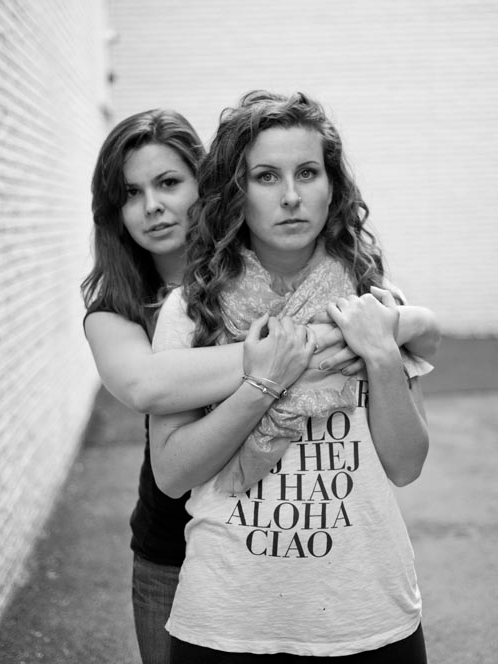 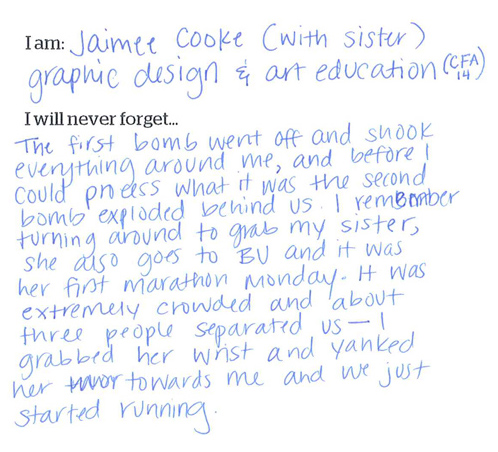 Jaimee Cooke (CFA’14) (right) and her sister, Katy Cooke (CGS’14), in the alley they ran down to escape the chaos on Boylston Street one year ago. 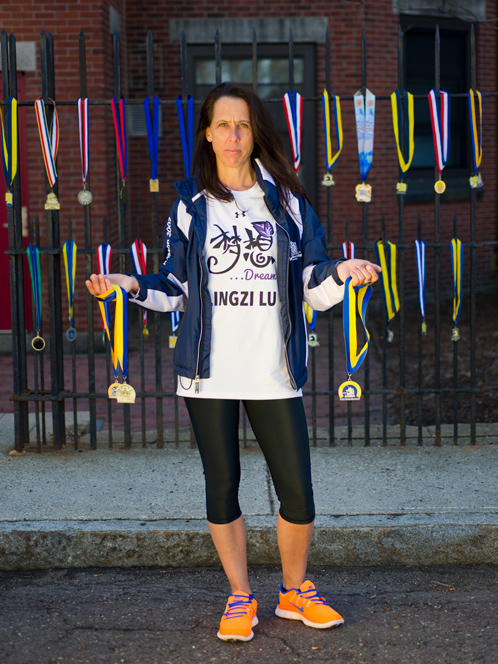 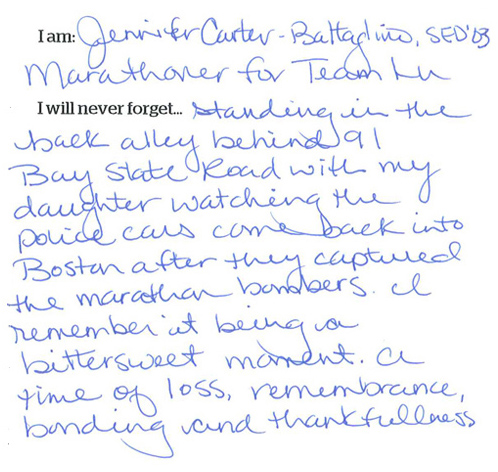 Jennifer Carter-Battaglino (SED’03) in the alley behind 91 Bay State Road. She has been running marathons, 5Ks, and ultramarathons since 2007 and is running this year as a member of Team Lu. 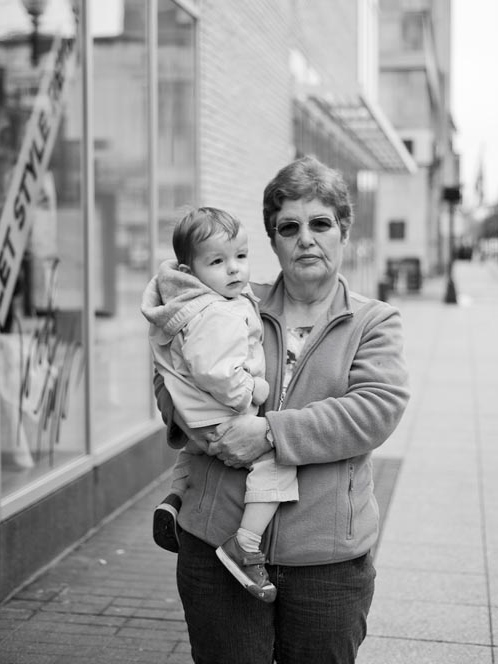 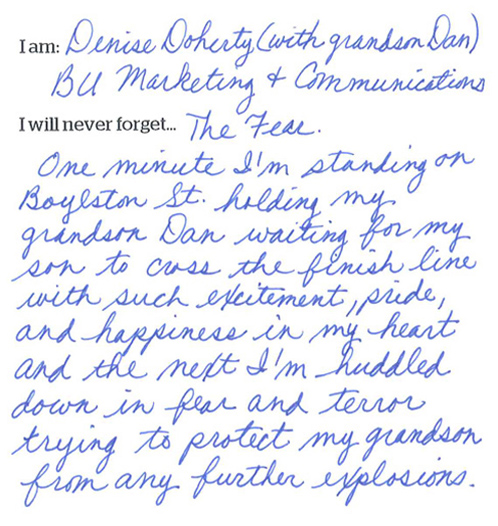 Denise Doherty and her grandson, two-year-old Dan Doherty, in front of Lord and Taylor on Boylston Street. Doherty, and other family members, sought shelter in the store and was ushered from the chaos through the Prudential Center by store personnel. 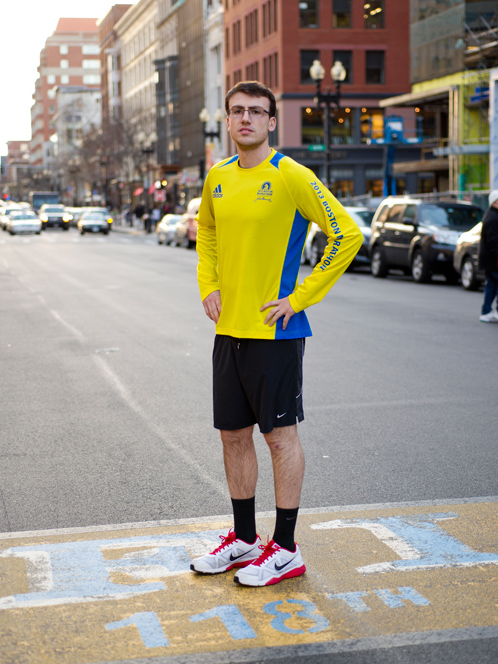 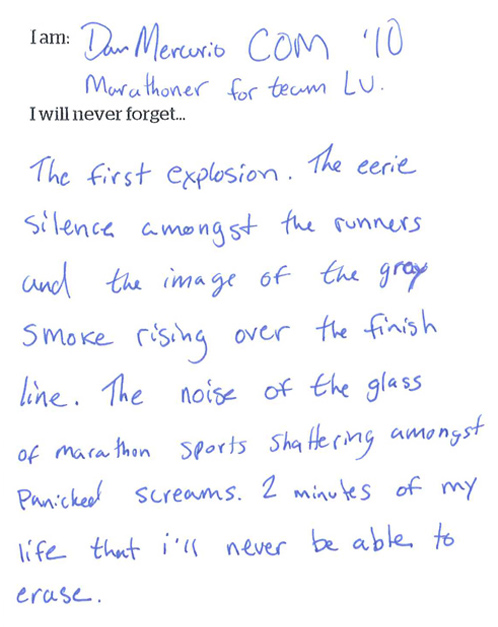 Dan Mercurio (COM’10) on Boylston Street. Last year he had just crossed the finish line when the bombs went off. He is running the course this year as a member of Team Lu. 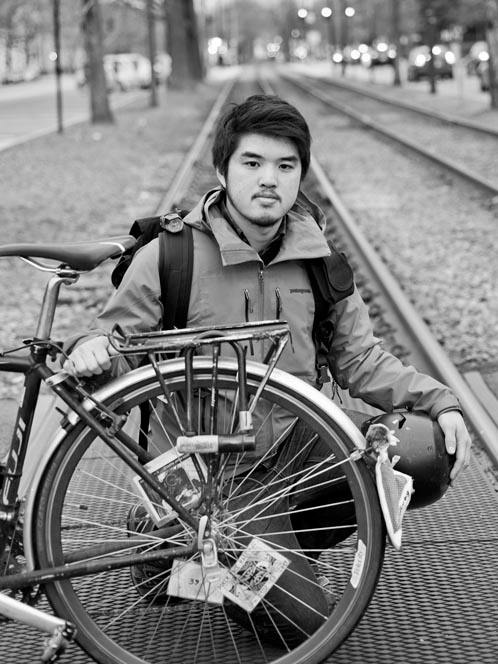 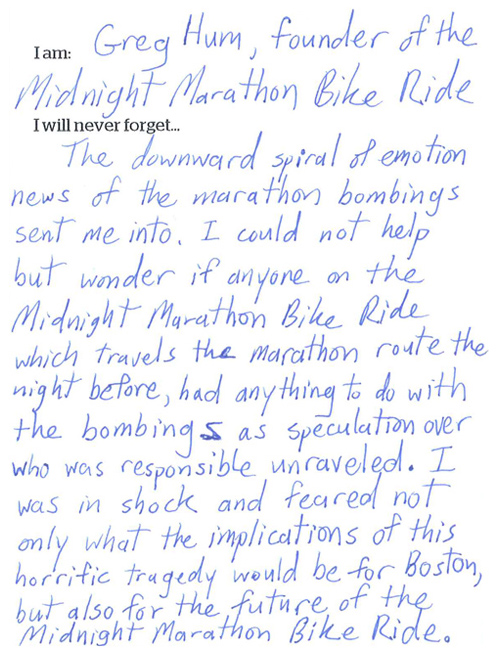 Greg Hum (CAS’10) near the Cleveland Circle T station. Hum will ride in the Boston Midnight Marathon Bike Ride, which he began six years ago, again this year. 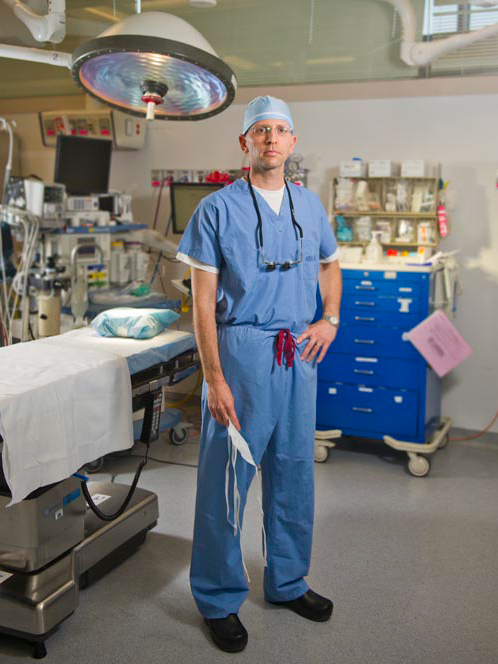 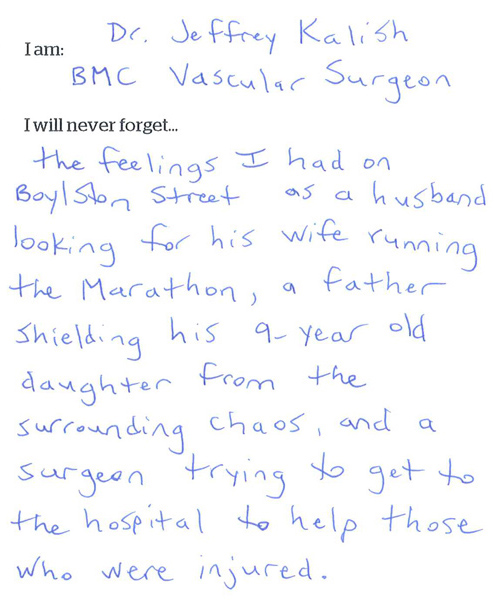 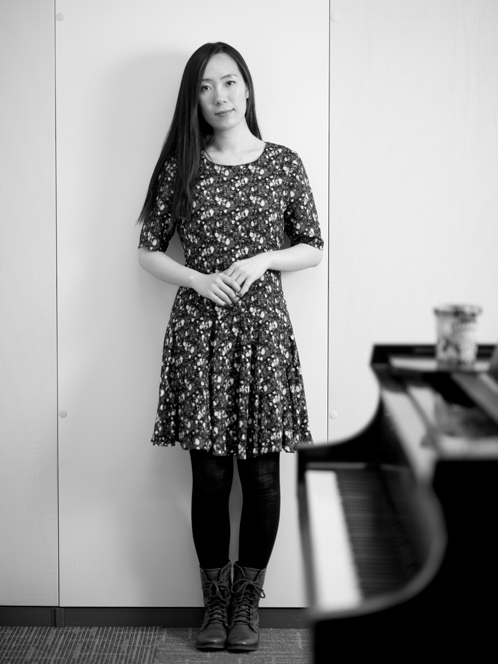 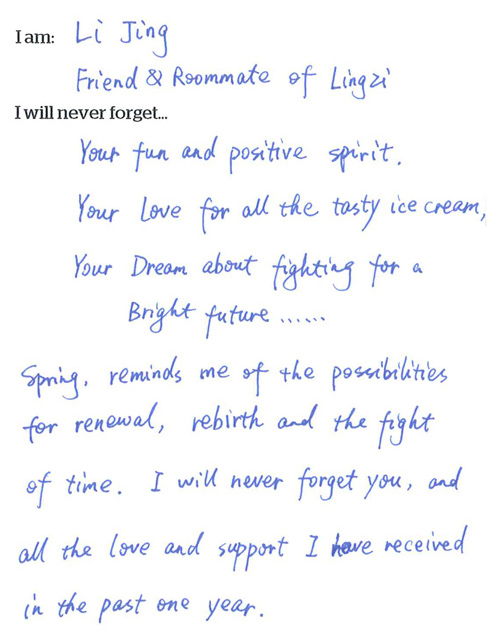 Li Jing (SED’14) in a CFA practice room, where, she says, Lu Lingzi loved to play piano in her free time. Jing was a close friend and roommate of the BU grad student killed in the bombings. 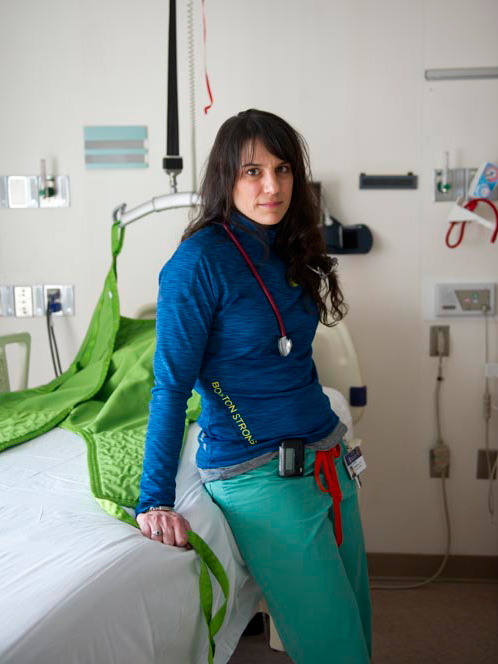 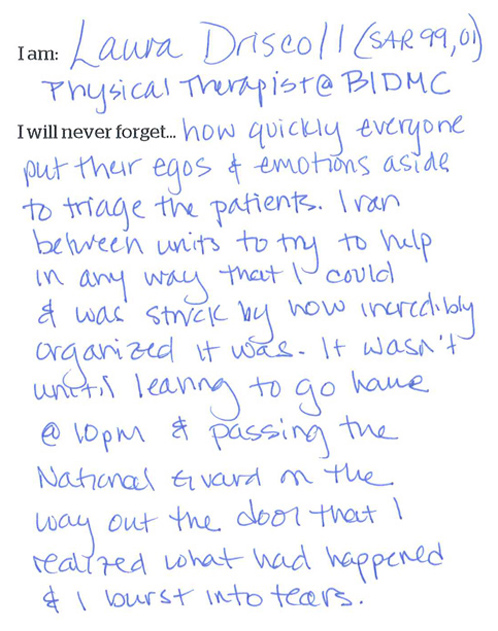 Laura Driscoll (SAR’99,’01) in a room on the Beth Israel Deaconess Medical Center trauma floor, where she is the Rehabilitation Services Department inpatient team leader. The bombing victims were each given two free spots in this year’s Marathon; one of them, Driscoll’s patient Erika Brannock, gave her a spot. 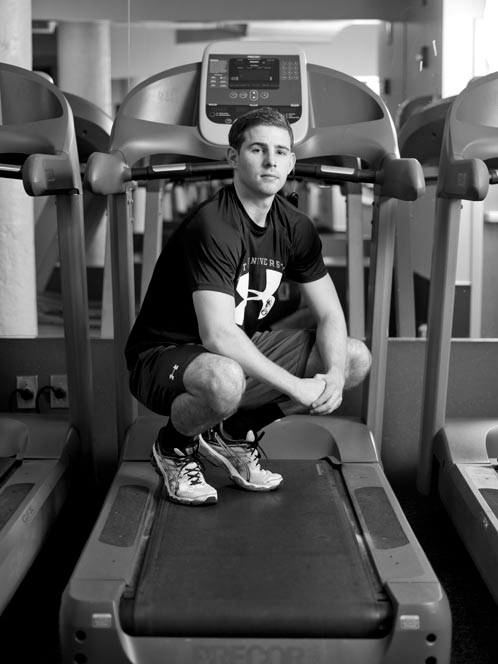 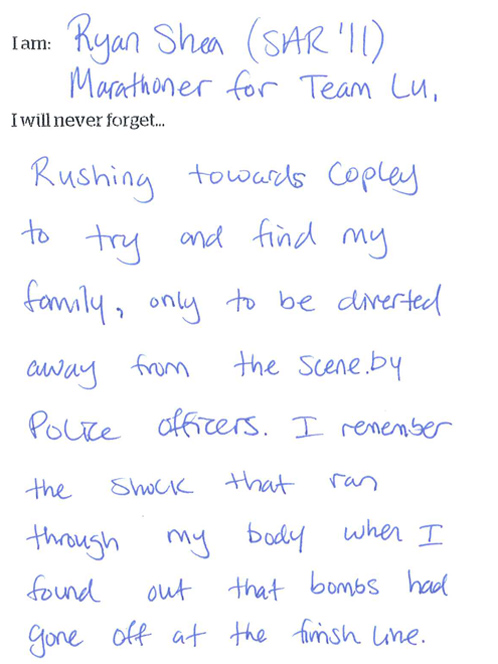 Ryan Shea (SAR’11) on a treadmill at 300 Babcock Street. Shea’s cousin ran last year’s race, and he was there to cheer her on. To show support for the victims and their families, he ran a marathon that night, untrained. He is a member of Team Lu. 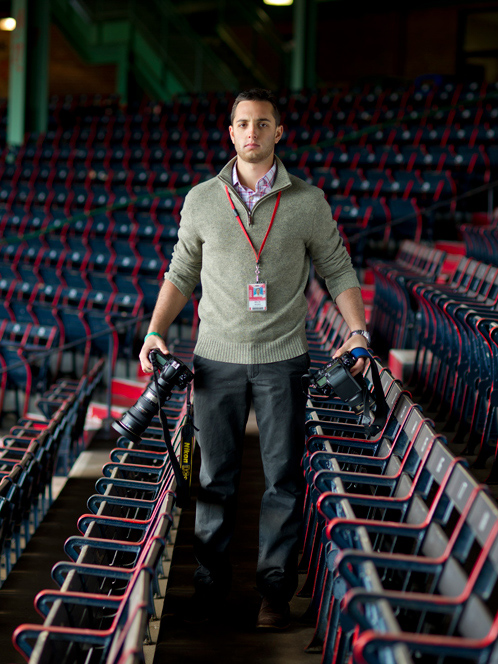 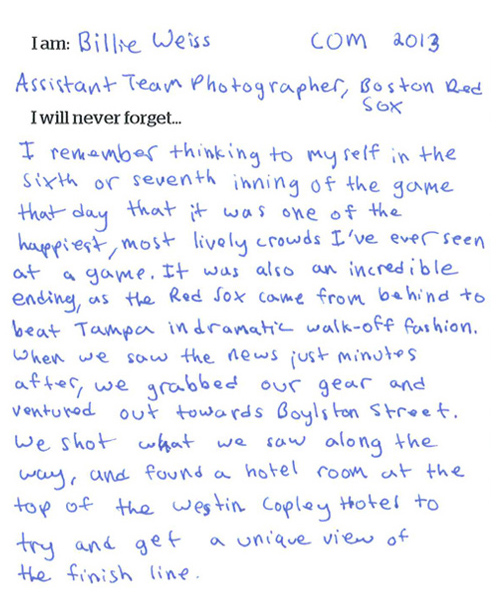 Billie Weiss (COM’13), Boston Red Sox assistant team photographer, at Fenway Park, where he was working when the bombs went off last year. 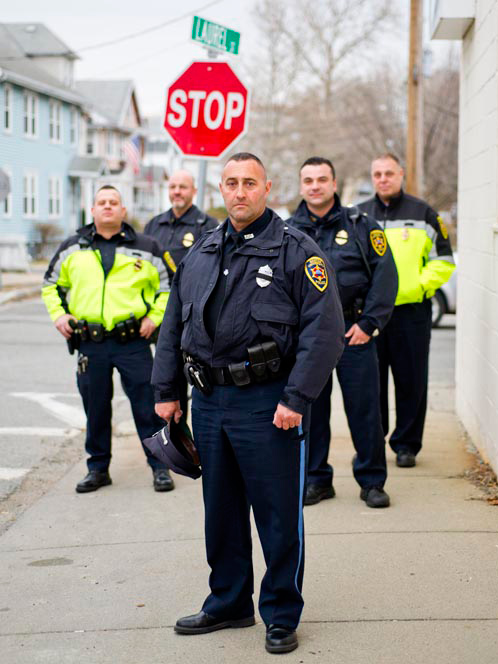 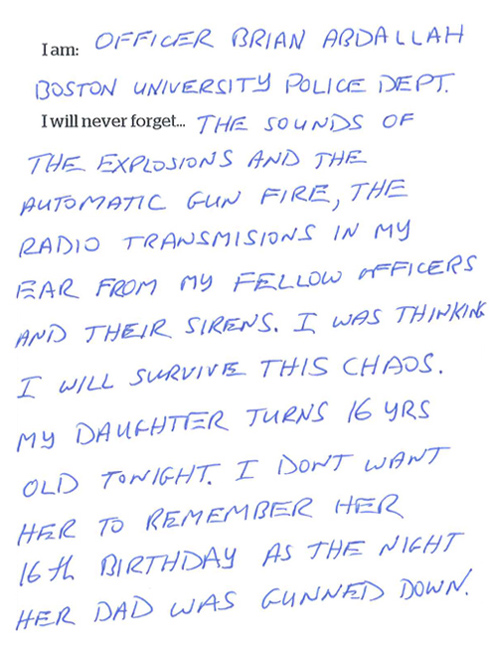 BUPD Sergeant Larry Cuzzi (from left), Sergeant Jeff Burke, Officer Brian Abdallah, Lieutenant Taso Giannopoulos, and Captain Robert Molloy in the Watertown neighborhood where the manhunt for the bombers was centered. Abdallah, one of the first officers to respond, worked closely with the arresting officers that night.

There are 9 comments on BU Remembers