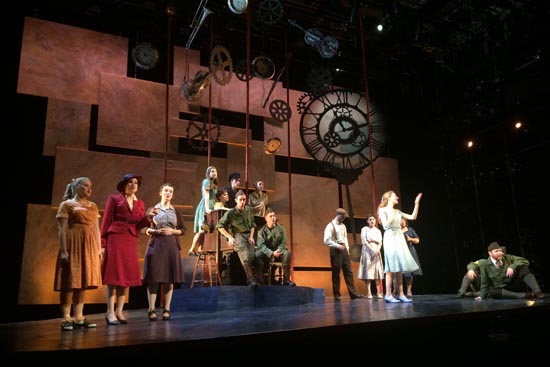 The BU College of Fine Arts production of the poignant folk opera The Human Comedy runs through December 18 at the Calderwood Pavilion’s Virginia Wimberly Theatre. Photo by Michael Navarro

William Saroyan’s coming-of-age novel The Human Comedy was published in 1943, a year when America was sending its sons overseas to fight in World War II and the telegram was becoming grimly synonymous with grief and loss. A latter-day incarnation of Homer’s Odyssey (the teenage telegraph messenger in the novel is named Homer and his younger brother is named Ulysses), Saroyan’s novel tells the story of a small-town American family’s struggles to survive World War II as Homer grows up and his older brother, Marcus, goes off to fight.

The Human Comedy was made into a film the same year it was published, winning Saroyan an Oscar for his screenplay. Four decades later, it was adapted as an off-Broadway musical (followed by a brief Broadway run), with Saroyan’s episodic tale of a teenage messenger brought to life by composer Galt MacDermot, best known for Hair, the much-revived, quintessential 1960s romp. Beginning tonight, the College of Fine Arts is staging the musical, referred to as a folk opera because there is no spoken dialogue, under the direction of Jim Petosa in the Virginia Wimberly Theatre at the Calderwood Pavilion at the Boston Center for the Arts. Matthew Stern (CFA’15) is the musical director. The musical runs through Thursday, December 18.

The production is sponsored in part through the Stewart F. Lane and Bonnie Comley Musical Theatre Fund as part of CFA’s yearlong celebration of Lane (CFA’73) and Comley, the Tony Award–winning producers and friends of BU, who joined the ranks of $1 million–plus lifetime donors with the announcement of the fund in July 2014. This fund has provided the School of Theatre with the resources needed to produce one musical a year and to eventually enhance its musical theater curriculum by developing an elective musical theater program. The performance is dedicated to the memory of Jasmine Chobanian, BU’s “former first lady” and longtime friend of CFA, who died this past July.

With more than a dozen roles, the musical is “a strong ensemble-based piece that uses gospel, jazz, pop, blues, and other authentically American music idioms to cast its potent spell on its audience,” says Petosa, head of the School of Theatre. “I’ve been enthralled by this American folk oratorio since it came on the scene in 1983. The novel was a haunting evocation of World War II America, and leave it to MacDermot to mine it for its powerful evocations of the price of war.”

The production features a cast of 15 CFA students and a small orchestra that includes piano, guitar, bass, drums, violin, cello, two reed players, a trumpet, and a trombone. A “celebration of all American musical styles,” The Human Comedy “is largely about music, about how we use music and, in this case, how music has the power to heal,” says Stern. Though it features a daunting 86 songs, the nearly two-hour-long play moves really quickly, he says, adding that audience members familiar with Hair will hear MacDermot’s style in many of the songs.

The play is “a little less political than Hair,” says Stern, “but it shows us what war means to people who are back at home, what it means to the messengers who have to report the news, and how war asks human beings to stay strong.” And while it is an ultimately hopeful play, Stern says that if theatergoers cry during certain  parts, “we’ll have done our job well.”

The Human Comedy runs tonight, Friday, December 12, through Thursday, December 18, (no performance Monday, December 15) at the Virginia Wimberly Theatre in the Calderwood Pavilion at the Boston Center for the Arts, 527 Tremont St., in Boston’s South End. Tickets are $12 for the general public, $10 for BU alumni, WGBH members, Huntington Theatre Company subscribers, students, senior citizens, and groups of 10 or more; members of the BU community can receive one free ticket with a BU ID at the door on the day of the performance, subject to availability. By public transportation, take an MBTA Green Line trolley to the Copley Square stop or the Orange Line to Back Bay. Buy tickets here or call 617-933-8600.

A Musical Odyssey of World War II
0
share this