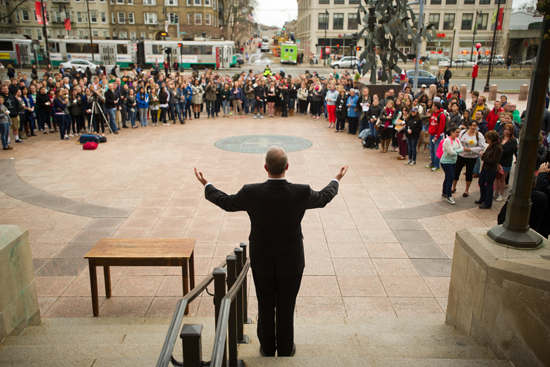 Their handheld candles refused to light as several hundred members of the BU community huddled against a fierce wind on Marsh Plaza at 5:30 yesterday afternoon for a vigil honoring the dead and wounded in Monday’s bomb attacks near the Boston Marathon finish line. One of the three killed was a BU graduate student, and another BU student was among the wounded. As plaza flags twisted at half-mast and Ralph Vaughan Williams’ Dona nobis pacem poured from loudspeakers, Brother Larry Whitney seized on the moment as a reminder of the constant “struggle to overcome violence and death.”

Whitney (STH’09,’15), University chaplain for community life, was joined by Reverend Robert Hill, dean of Marsh Chapel, and other campus religious leaders in offering words of solace to those gathered to grieve. Hill urged them to embrace “what we find gracefully and meaningfully good,” and in time, move forward.

“The whole land trembled at the sound,” Whitney read from Jeremiah 8, words that described how it felt for Quinn Rodriguez (SMG’15) and Kayla Berrios (CAS’15), who were among those at the service. The friends had been on Beacon Street in Kenmore Square Monday watching the runners when a convoy of ambulances and shouting police sent them retreating to their dorm in tears. They and others were gathered, Hill told them, “to identify and name” their grieving and to accept “what we have endured.”

Rabbi Michael Beyo, acting executive director of BU’s Florence & Chafetz Hillel House, counseled those gathered that “life is stronger than any death. Yes, grieve,” he told them. “But enjoy life. Don’t be afraid.” Beyo followed his brief comments with the words of Psalm 121: “He will not let your foot slip; he who watches over you will not slumber.”

Under an intermittent drizzle, Dexter McCoy (COM’14), former BU Student Government president, acknowledged that for him and for many, “we can’t put into words what our hearts are holding onto…a day meant for celebration was taken from us in an act of terror. This act of terror was meant to steal our joy.” The violent events that darkened Boston and cut short a jubilant international event were intended, he said, “to drive us apart in fear, and we must say no. This is our Boston and no one can take it away from us.”

Hill spoke of the Marathon as an inclusive reflection of the best of Boston and of the human spirit. “Some of you were watching as the race ended and saw people who had run 25 miles,” he said. “There was an elderly gentleman in a dark suit and tie, a younger gentleman with blue hair. There were men and women running for charity, and people in wheelchairs, all moving along steadily.” And in various ways the rest of us must move along too, “find our own way” into the future.

While a common emotion in the wake of the deadly blasts is anger, Father John McLaughlin, BU’s Catholic chaplain, offered the message that good triumphs over evil. Quoting from Romans 12, he implored the crowd to “hate what is evil” and “cling to what is good. Do not repay anyone evil for evil….If your enemy is hungry, feed him. Good overcomes all things.”

The brief service concluded with the Vaughan Williams piece, recorded live at a 2006 BU Symphony Orchestra and Symphonic Chorus performance at Carnegie Hall. Repeated attempts were made to light the candles, but as the wind intensified, it was clear that the effort was futile, and the crowd dispersed, streaming east and west on Commonwealth Avenue.

“We Must Stand Together”

There are 4 comments on “We Must Stand Together”