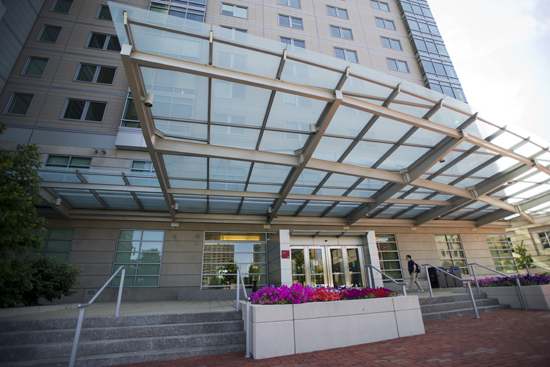 Upperclassmen will be allowed to swap directly for an opposite sex roommate as early as this fall in residences like StuVi II. Photo by Cydney Scott

With strong input from the student body, President Robert A. Brown has approved a University Council recommendation to introduce gender neutral housing as an option for most students, allowing BU to begin offering the option on a limited basis as early as the upcoming semester.

“This is about empowering students to make choices about how they live and giving them a greater measure of control over their college experience,” says Dean of Students Kenneth Elmore (SED’87), who prefers the term “roommate choice” to “gender neutral housing.” He says that “this is really about your choice of who you live with. Your preference about gender and how you perceive it is really not our concern.”

To date, students could choose roommates of the same sex. The president’s endorsement of the University Council’s June 17 Executive Committee vote recommending the introduction of gender neutral housing (a process stipulated in University bylaws) means that two or more students will now be allowed to share a bedroom, a suite, or an apartment in select buildings across campus without regard to gender. In adopting this change, the University joins at least 90 institutions nationwide, including New York University, George Washington University, Tufts, and Northeastern.

Because residences are already full for the fall, upperclassmen interested in gender neutral housing will be allowed to choose roommates only through a direct swap. Implementation of the policy will begin in earnest next spring, when students can choose from a variety of housing options, both in terms of cost and location. Some student residences—Claflin, Rich, and Sleeper Halls, Warren Towers, The Towers, and the Myles Annex, all of which are large dormitory-style residences with shared community bathrooms—will be excluded from the arrangement.

Freshmen will not be eligible to select gender neutral housing because University Housing assigns rooms to incoming students, and officials were reluctant to force anyone into a specific living situation. Several peer institutions, among them Brown, Columbia, Tufts, Syracuse, and New York University, take a similar stance.

The new policy requires that all students in gender neutral accommodations consent to the arrangement and that each room be filled. Students who select this housing option won’t be required to explain their preference. This differs from the approach taken by some other schools, such as the University of Southern California, which have chosen to provide specialty housing for their LGBTQ community.

“We do not believe we need to know why students opt for accommodations when living with members of the opposite sex,” says David Zamojski, assistant dean of students and director of residence life. “It’s a choice for students, and we’re prepared to support students no matter where they live on campus, no matter what their living situation.”

That proposal noted that BU offered strong academic programs, ample research opportunities, and best-in-show housing accommodations, but lagged behind other universities by not allowing students a gender neutral housing option. The student senators also argued that students who identify as lesbian, gay, bisexual, or transgender felt “displeased, unwelcomed, and most importantly, unsafe due to the lack of this option.” They proposed gradually implementing gender neutral housing campus-wide over a five-year span.

“We, as members of the BU community, believe that this is a mature living situation and that the vast majority of students who choose to live under it will rise to the occasion…with a great deal of respect for the program and for its rules,” they wrote. “No one should feel uncomfortable in university housing. No student should feel unwelcomed while living on campus. And, above all, no student should ever feel unsafe in their own home here at Boston University.”

Marc Robillard, executive director of housing and dining, says he and his staff had great respect for the proposal, but were reluctant to make gender neutral housing a specialty option tailored for the LGBTQ community, as the students had advocated.

The only problem, says Robillard, was Housing’s computer system, designed more than two decades ago to automatically assign male students with males and female students with females. “It served its purpose well and never made a mistake,” Robillard says with a laugh. “Now we’re trying to do it on purpose and we can’t.” Information Services & Technology staff have since fixed that programming quirk.

Robillard doubts there will be an immediate rush for gender neutral housing, but expects requests to grow over time as students become familiar with the policy. He notes that sister schools report relatively low usage—less than one percent of USC and Tufts students, just over 2 percent of Northeastern students, and about 5 percent of UPenn students chose the option, according to information compiled by the University Council Committee on Student Life and Policies.

While University officials point to the many upsides of the policy—greater student comfort, satisfaction, and school pride, a more progressive posture toward housing, and possibly more students living on campus—they are braced for potential challenges. Students living with two or more roommates who favor gender neutral housing, but are reluctant to adopt it themselves, might cave in to peer pressure and regret their decision. Couples might break up and request a room change (but, Zamojski says, his office has faced this issue before with same-sex couples and weathered it just fine). And parents are expected to call with concerns.

For BU parents who still feel uncomfortable, Elmore has some advice: “I suggest that you discuss that with your student. We believe that is a discussion that’s not our business.”

There are 48 comments on University Approves Gender Neutral Housing