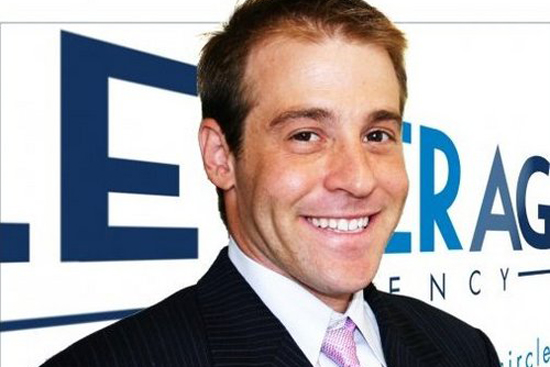 The easiest clients “are definitely those companies that don’t take themselves too seriously, and those that think out of the box and are fun,” says Ben Sturner (COM’99).

BU journalism lecturer Jack Falla was famous for scheduling his College of Communication sports writing classes at 8 a.m. A longtime Sports Illustrated reporter, Falla (COM’67,’90) was widely considered one of the best hockey writers in the business. Holding his classes so early was his way of guaranteeing that only the most serious and driven students signed up, and despite the hour, his enormously popular classes always had a waiting list. Following his death in 2008 at the age of 64, COM instituted the Jack Falla Speaker Series in his memory.

Among those lucky enough to get into one of Falla’s classes is Ben Sturner (COM’99), the founder and CEO of the sports, entertainment, and media marketing company Leverage Agency, who will give tonight’s Jack Falla Lecture.

“He used to refer to BU alumni as the ‘sports mafia,’” says Sturner. “Once you were in and got to know Professor Falla, he was someone who would work with you after hours and stay in touch with you throughout your career.”

Sturner credits Falla’s class with helping to shape his career and motivate him to establish his own agency, which has secured more than $100 million in sponsorships through strategic relationships and extensive contacts with Fortune 500 companies and sports properties since its creation seven years ago. Based in Manhattan, the agency counts among its clients the The Ivy League, the Harlem Globetrotters, Jimmy Kimmel Live!, and the social news website reddit. Sturner also founded the Manhattan Sports Business Academy, an intensive eight-week summer program launched last year for undergrad and grad students and young professionals interested in the sports communication field.

Sturner will speak tonight at COM at 5 p.m. The event is free and open to the public.

BU Today spoke with Sturner about what he’s learned as an entrepreneur, the world of sports and entertainment marketing, and his advice for students interested in entering the field.

BU Today: You were a tennis player at BU. When did you first become interested in sports?

Sturner: I started playing tennis at the age of two and continued into high school, and at BU I played on the Division I team. We won a conference title my freshman year. It was an incredible experience and taught me a lot about how to juggle Division I sports with school.

I remember being five years old and going to get the newspaper to read the sports section. When I was 16, I would call in to the University of North Carolina at Chapel Hill radio show, because I lived in the area, and I won the sports trivia contest and a free pizza every week. Every time I won, they would ask me to come on the show to talk. Finally, I became cohost of the show. This enabled me to get into COM, because you had to write an essay about a communications experience you’d had.

Early in your career, you worked at Lycos, one of the first major internet companies. How did the tech boom change marketing?

I interned and then got a job out of college as a marketing communications specialist at Lycos, which at the time was the fastest growing internet company in the world. This community back in 2000 really was the tipping point that became what social media is now. That was an interesting time. You didn’t know what could stick, and it was a great time for me to be involved with a fast-moving internet company.

Did your work at Lycos influence your decision to launch your own agency?

Definitely. I went with Lycos’ head of business development, Jeff Bennett, when he was starting his own agency, and I learned a lot about being an entrepreneur. This was right as Lycos was getting sold to Telefónica, becoming Terra Lycos. I moved to New York and worked from my apartment. One of the things Jeff said to me is that as an entrepreneur, you’re not making a salary, you are making commission. To succeed you had to have the stomach to endure being an entrepreneur. I loved doing it, and when Jeff went on to do another job, in 2005 I started the Leverage Agency in my apartment, and have moved three times. Now we have offices on both coasts, and we are one of the top marketing agencies in the country.

What are your first steps when you begin a new campaign? How do you go about deciding how to market a new client?

It’s not a gunshot approach. It takes a lot of research and a lot of strategy work, and you have to figure out how the property—and by that I mean the teams, leagues, events, athletes, television shows, digital, and websites that we take on—can fit a brand’s campaign. Nivea was a great fit for beach volleyball, because it was about the skin. The Gillette Venus Vibrance Razor was great for women’s softball, and Old Spice was great on Jimmy Kimmel Live! for the male demographic. How do you come up with something that is fun, creative, and different and can also have a good PR element? Those elements were all something I learned from communications school, classes I took in public relations, advertising, public speaking, and marketing.

What makes for a good match between a sponsor and a company? How do you identify partnerships and sponsorships?

You really have to look at the brand attributes. Nivea is about a healthy, active lifestyle, and beach volleyball is a lifestyle sport, it’s about the skin, it’s about beauty. You’re looking for the sponsors that basically can identify with customers and have an ownership position with the sport or property. That’s where it works out really well. With Bud Light we did a deal for the naming rights for its concert series on Jimmy Kimmel Live!

At the end of the day, when you bring properties to corporate companies, it’s about relationships. The longer you are involved in marketing, the stronger your relationships are, the more you know who to call, who the decision-makers are. And whether you get hired for the deal is about relationships, and that’s really important in networking.

When you use the term “branded entertainment and integration” on your website, are you talking about product placement?

Well, product placement is placing Poland Spring water on an episode of a television show. The integration is when you are on Jimmy Kimmel Live! and you are doing a skit about insurance and Flo from Progressive Insurance comes on for a fun skit, or Samsung Phone is on the Grammys preshow when the stars are taking pictures—that’s integration. Product placement is just sitting there.

Is there a fine line between the two concepts?

You have to draw a fine line between being too promotional and being organic, and you do this by finding the right television shows, or sports teams—it has to be in the right way. If it’s too forced, it won’t work.

What kinds of companies and clients are the easiest to work with? The hardest?

The easiest are definitely those companies that don’t take themselves too seriously, and those that think out of the box and are fun. For Dunkin’ Donuts, we did a campaign where we put head tattoos on college students around the country during the NCAA basketball tournament. We called it Dunkin’ Mania. We did something similar for Reebok during the Boston Marathon. And we did a campaign for Spira Footwear, where the shoes were banned from the Boston Marathon because of the spring in their soles. We did a campaign with H&M and David Beckham, where we did the PR around the underwear ad and the Super Bowl.

The companies that aren’t fun to work with are the ones that take themselves too seriously, are regimented in their plans, and the ones that don’t have opportunistic budgets for good ideas, because my philosophy is that the best ideas always have room in the budget.

Approach your job like those all-nighters in college. More people should be working that hard in their jobs, because there is a big potential to make a lot of money. Also, be the first at something, think outside of the box, think creative and global. Especially nowadays, we are doing a lot more global campaigns.

Be persistent. Realize that “no” is the first two letters of “not yet.” You have to go after it. You are a reflection of what you say and do on social media, so don’t think prospective employers aren’t looking on your Twitter feeds or Facebook page. Also, be active but be smart about things. I find that executives are easier to get to when you hit them on Facebook, LinkedIn, or Twitter. Executives get a barrage of emails; I get hundreds a day. But I only get 5 to 10 Twitter messages, yet I look at that just as much as anything else. It grabs their attention.

Also email them at the right hours. People are busy between 8 a.m. and 6 p.m., but if you email them at 10 p.m., a lot of executives will write back to you. Also be creative, because you are one of hundreds or thousands applying, so ask yourself how you can stick out. How do you become the person they want to call first?

Ben Sturner speaks tonight, Tuesday, March 5, at 5 p.m. at the College of Communication, Room 209, 640 Commonwealth Ave. The event, part of the Jack Falla Speaker Series, is free and open to the public. Tickets are limited and can be ordered here.

The Fine Points of Sports Marketing

There is 1 comment on The Fine Points of Sports Marketing