In this weeklong series, BU researchers explore the science behind Earth’s environmental changes, and what they mean for our future.

Bruce Anderson didn’t set out to prove that the rise in global temperatures since the start of the Industrial Revolution is caused by human activity. And the five-year study that he and four colleagues then published in the October 2012 Journal of Climate doesn’t draw that conclusion, but it does suggest that man-made pollutants are to blame.

The study, which tested three hypotheses about causes of the warming trend, debunks alternative theories that have been floated in recent years. At the same time, says Anderson, a College of Arts & Sciences associate professor of earth and environment, the research strengthens the theory that humans are responsible for the phenomenon, in which carbon dioxide, methane, nitrous oxide, and the other gases we emit accumulate in the atmosphere, trapping the heat that radiates from the Earth.

“This was one of the most basic scientific experiments you could perform,” he says. “You have multiple hypotheses to explain a phenomenon—the increasing global temperatures over the last half-century—and instead of trying to prove any one of them, our main goal was to disprove those hypotheses that we could, such that we’re left with one remaining hypothesis that then becomes the reigning theory.”

The consensus among scientists is that global temperatures have risen about .8 degrees Celsius since the mid-1800s. Anderson believes that focusing on the heat content in the oceans can tell us why more effectively than the temperatures themselves. He notes that the oceans store and release nearly 100 times more heat than land surfaces and that nearly 95 percent of the heat added to the environment over the last 50 years has gone into the oceans.

For their study, Anderson and his colleagues—from Washington state, the United Kingdom, and Italy—looked at the heat content of the oceans from 1950 to 2000 and used complex computer models to test the three hypotheses.

First, Anderson calculated the expected increase in ocean heat resulting from the changes in levels of carbon dioxide and other chemicals. Then he compared those numbers with the observed, or measured, increases in ocean heat over the same period—data that’s typically collected from the top 700 meters (about 2,300 feet) of oceans across the globe by devices such as an XBT, or expendable bathythermograph. The two sets of numbers matched.

“What we find,” says Anderson, who led the study, “is that the heating of the interior oceans is fully consistent with what we’d expect, given what we know about how much energy we are retaining through our emissions of heat-trapping gases and what is needed to produce the overall increase in temperatures around the world. That wasn’t entirely new. What was new was that we were able, using the same set of data, to also test alternative hypotheses that other people hadn’t looked at.”

One hypothesis suggests that global warming is the result of what’s called internal climate variability, or changes in the interactions between the oceans and the atmosphere. In this case, it’s suggested, temperatures are rising because they are drawing heat from deep within the oceans.

That can certainly happen, he says, pointing to El Niño, a warming of the waters in the equatorial Pacific that affects climate around the world. “You can see it from year to year and from decade to decade,” he says. “Some people claim that you can see it over the course of multiple decades, and that it might be a contributor” to climate change. 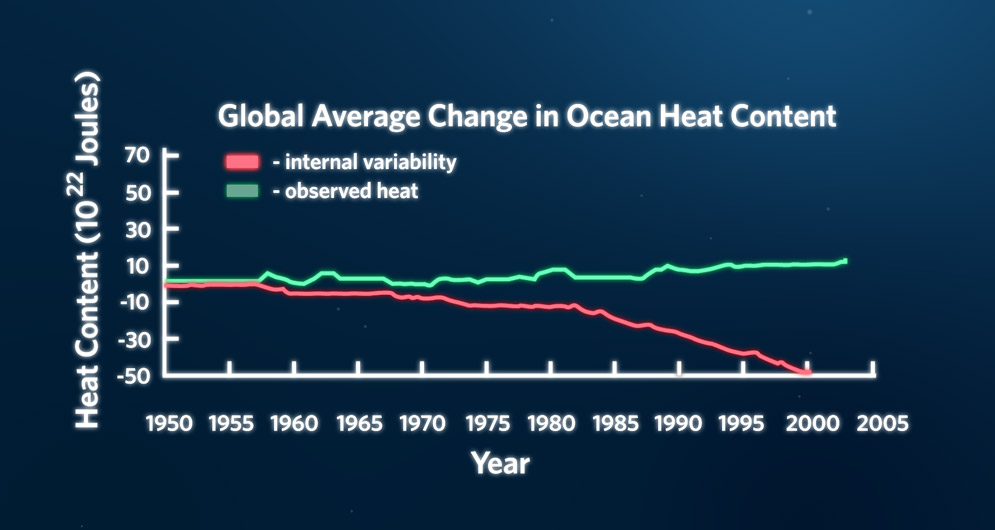 Ocean temperatures would be much lower than they are if the theory of internal climate variability—or changes in the interactions between the oceans and the atmosphere, such as El Niño—were true. But as the graph above shows, the predicted heat content of the oceans under that theory is at odds with what scientists have observed over 50 years.

Anderson estimated how much energy would be needed to drive the increases in global temperatures, and as a result, how much that process would reduce the heat of the interior oceans. He compared those calculations to the measured heat content of the oceans over the five decades, plotting the numbers on a graph. The two sets of numbers did not match.

It turns out, he says, that for the hypothesis to hold water, there would have to be a significant drop in ocean heat in order to feed the increasing global temperatures. But that prediction is at odds with what scientists have actually seen: a steadily increasing amount of heat over a 50-year period.

“We can show that at most 10 percent of the warming could have been contributed by heat drawn from the interior oceans,” Anderson says.

The third theory, he says, was the trickiest one to test. “Every so often, particularly in nonscientific literature, where people aren’t required to test the hypothesis they propose, there will be a slew of hypotheses that are put out there: increases in the energy output of the sun, changes in gamma radiation, galactic cosmic rays.”

“The problem with testing these hypotheses is that they’re innumerable,” he says. “People throw them out willy-nilly.” And scientists don’t know how much heat would be generated by each mechanism.

For the study, Anderson assumed that there is some unknown source of heat, and proposed that the source added as much heat to the climate system as all of the greenhouse gases combined. How would the heat content of the oceans respond?

He calculated that response and compared it to the observed heat content of the oceans. Like the second hypothesis, the two sets of numbers failed to match. “We came to the conclusion that, at most, 15 percent of the warming over the last half-century could have been the result of some unknown mechanism for heating the planet,” he says.

“No theory is in and of itself immutable. Even the theory of gravity is constantly being adjusted, but at no point in time does that mean I’m going to choose to walk off a cliff just because some questions remain about it.”

Anderson believes that the study rejects “in one fell swoop” the idea that there are mechanisms other than human activity that cause climate change. At the same time, he says, the foundation for the theory that global warming is caused by human activity is becoming more robust. “No theory is in and of itself immutable,” he says. “Even the theory of gravity is constantly being adjusted, but at no point in time does that mean I’m going to choose to walk off a cliff just because some questions remain about it.”

Questions do remain about what will happen if we continue to ramp up the concentration of heat-trapping gases. Anderson is now looking into the way changes in the climate system—in the amount of water in the atmosphere, in the number, elevation, and location of clouds, in the amount of snow and ice cover in higher latitudes and during the winter—amplify or dampen the forces of heat-trapping gases.

“But with regard to mitigation, this takes us one step further away from the need to do more process-based and scientific studies and one step closer to actually saying this is a problem that we need to address,” Anderson says. “So in that sense, whether it’s a small step or a large step, it’s progress toward that transition from developing scientific questions to developing scientific policy.”

The Climate Crisis: Why the Earth Is Warming

There are 10 comments on The Climate Crisis: Why the Earth Is Warming

The Climate Crisis: Why the Earth Is Warming
10
share this