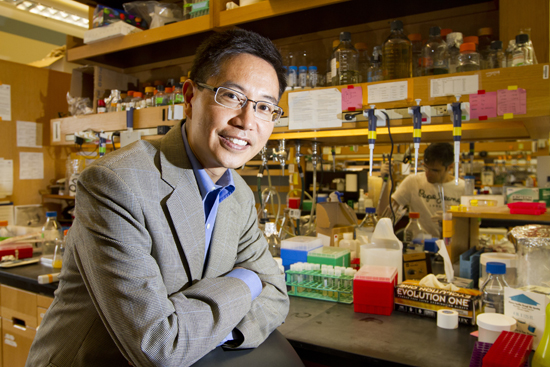 Christopher Chen, a new College of Engineering professor of biomedical engineering, is one of the world’s leading experts on regenerative medicine. Photo by Chitose Suzuki

It’s estimated that 18 Americans die every day waiting for an organ donation. More than 120,000 are currently on a waiting list. And even if a patient receives that desperately needed kidney or liver, there is still a 10 percent to 20 percent chance that the new organ will fail. So researchers in the areas of tissue engineering and regenerative medicine are actively pursuing ways to use a patient’s own cells to grow an organ, which would eliminate the need for donors and the risk of organ rejection.

Enter Christopher Chen, a new College of Engineering professor of biomedical engineering, who is one of the world’s leading experts on regenerative medicine. Chen studies tissue engineering and mechanobiology, which combines engineering and biology to study how physical forces and changes in cell or tissue mechanics affect development, physiology, and disease.

“Since most diseases involve the loss or damage of one tissue or organ, being able to fix that one thing, for someone who is otherwise healthy, could have a dramatic impact on their quality of life,” says Chen, who came to Boston University from the University of Pennsylvania in August and is still unpacking at his Cummington Street office. “If we can understand the basic mechanisms of how tissues and cells regenerate, it could give us tools to broadly extend people’s lives. Figuring out how to ‘manufacture’ such things is important.”

Chen says he has always been interested in trying to understand why normal cells go awry. As a PhD student at the Harvard-MIT Division of Health Sciences and Technology, Chen began to wonder about cells’ unfavorable responses, like degeneration, scar formation, and organ rejection. He thought that if he could better understand these responses and why they were occurring, he would be able to more effectively find solutions.

In his new lab at BU, Chen and his team of students are creating artificial environments populated by cells, like miniature vivariums, where they can observe and identify the underlying mechanisms that cause cells to interact with materials and to build tissues. Understanding how cells behave allows researchers to better understand the biology of stem cells, vascularization (the growth of veins in tissue), and cancer, and could ultimately help them to engineer artificial tissues and build hybrid biological-artificial medical devices.

“If we could guide cells to do the types of things we want them to, and if we understand how they make those decisions, then we might be able to artificially turn on and off the switches that make them go down a certain pathway,” Chen says. “Maybe that’s guiding a stem cell to become a cardiac cell, or preventing a fibroblast to not form a scar.”

Another key aspect of Chen’s research involves using a 3-D “printer” to help create organs using a patient’s own cells. Until recently, a researcher could make a 2-D structure out of various types of tissue, but couldn’t replicate a larger organ’s 3-D dimensions. Why? “When an organ gets beyond a certain size, the cells in the middle can’t get oxygen and so they suffocate and die,” Chen says. “So we are working to use 3-D printers to build blood vessels to feed the cells in the middle, like what happens in our body.”

To build these artificial blood vessel networks, Chen and colleagues at Penn and MIT devised a system using sugar to create a freestanding 3-D network that sits inside a mold. Once the network hardens, the lines of sugar are surrounded with a gel made up of cells from the organ that needs replacing. When the sugar dissolves, it leaves behind a clump of the organ’s cells with a network of hollow channels, which can then be lined with other cells to create blood vessels, allowing the kidney or liver cells to receive nutrients and oxygen in much the same way they would if they were in the body. This past week, Chen’s 3-D printing breakthrough was highlighted in James Woods’ new show, Futurescape, on the Science Channel. (The episode, titled “Living Forever,” is scheduled to air several times this week.) This kind of platform technology, while quick and inexpensive, is years from producing artificial organs on the scale needed for humans.

Chen’s research has already earned him numerous accolades. He is the recipient of a Presidential Early Career Award for Scientists and Engineers, an Office of Naval Research Young Investigator Award, the Herbert W. Dickerman Award for Outstanding Contribution to Science, and several other honors. He is a fellow of the American Institute for Medical and Biological Engineering and an editor of the Journal of Cell Science. Chen is the founding director of the University of Pennsylvania’s Center for Engineering Cells and Regeneration. He earned a bachelor’s at Harvard, a master’s at MIT, a PhD from the Harvard-MIT Division of Health Sciences and Technology, and an MD from Harvard Medical School.

“Chris Chen is an extraordinary scientist and will provide senior leadership and mentoring to advance our world-class biomedical engineering department,” says Kenneth R. Lutchen, dean of ENG. “He immediately amplifies and reinforces BU’s leadership position in bioengineering. Moreover, Dr. Chen is highly respected as a person and as an educator. He is one of the most well-liked colleagues in his field.”

Chen says he anticipates that his research involving 3-D printers to create blood vessel networks could be the kind of project to be developed at ENG’s new Engineering Product Innovation Center (EPIC) and that he is eager to share this technique with students. When it opens in January, the 20,000-square-foot teaching and design studio will be equipped with the latest industry technology, such as a computer-aided design studio, demonstration areas, fabrication facilities, materials testing, and 3-D printers.

“I love how students come in with a fresh perspective and are always asking questions,” says Chen. “Sometimes the most basic question can really jolt you into reframing what you’re working on, and open new avenues for research. If you’ve been in your field for a long time, you tend to not notice the things that don’t fit. I think having that fresh look is why the research and educational missions of a university are so synergistic, and of course what keeps us aging professors all young at heart.”