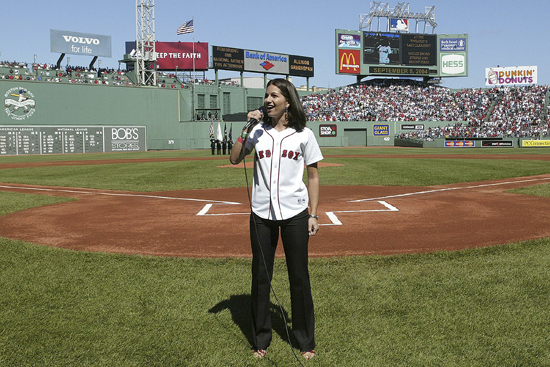 Your heartbeat seems to be clocking 150, your throat feels like parchment, and your brow has channeled its inner Niagara Falls. You’re about to speak in public and your body isn’t cooperating. Fortunately, communication consultant Allison Greenspan Shapira has an arsenal of cures for your symptoms. The former opera singer runs Global Public Speaking, a firm that helps “people become more powerful, more authentic public speakers.”

Shapira (CAS’99) is asked one question a lot: Is everyone as scared as I am? The next thing people want to know is whether she can teach them to conquer their nerves and ace an upcoming speech. “It’s a skill that everyone realizes is important,” she says of communicating in front of a crowd, “and everyone realizes they don’t do it well enough.”

The common public speaking mistakes occur across all ages and wages—avoiding eye contact, staring at notes, fidgeting—while “a lot of people will speak in very dry, impersonal, formal language, or jargon.” Shapira’s first lesson is simple: if you share a story you care about in the same language you’d use with friends, people will connect with your passion. And they’ll tolerate the odd slip and occasional “um.”

“When I’m speaking in front of people,” she says, “I don’t worry about being perfect, because I don’t think I need to be perfect.”

For a former aspiring opera star trained to eradicate every imperfection in a performance, that’s a liberating thought. Throughout her teens, Shapira was focused on the stage: she went to a performing arts school before joining the College of Fine Arts vocal performance program as a first soprano. “Once I got to BU,” she says, “I started realizing how many other wonderful things there are out there beyond music.” She switched majors, to Italian studies at the College of Arts & Sciences, and embraced a new philosophy, accepting that there “wasn’t just one path in life, but rather an infinite number of paths that are constantly evolving.”

In 2003, the “beauty of the unexpected” led to the formation of Shapira’s consultancy firm. After graduating from BU, she worked for the Israeli government as a director of public diplomacy (she’d interned at the Consulate General of Israel to New England during college) and was told she’d be giving speeches on behalf of the consulate. “I’d never given a speech before and was very nervous, so I joined the Boston Toastmasters club, which meets at BU,” she says. All those stage skills, the years spent on breath support and posture (techniques she teaches to clients today), came flooding back; within two years she was club president. When an executive approached the organization for some one-on-one training for a big speech, Shapira spotted an opportunity. Never a lemonade-stand kid growing up, she became an entrepreneur, she says, by “taking advantage of a situation that was presented to me and recognizing that it had value beyond that moment.”

Almost a decade later, she’s still realizing that value. Shapira recently relocated Global Public Speaking from Boston to Washington, D.C., where she offers private classes and group sessions, not just for businesspeople, but for members of foreign embassies, government agencies, and international organizations. She also teaches graduate-level communication workshops at Harvard’s Kennedy School of Government and is about to begin teaching in Georgetown University’s executive leadership program. But whether the students are fresh-faced interns, silver-haired politicos, or budding entrepreneurs wanting to hone their “pitches,” the essential lesson is the same. Although public speaking is “absolutely something you can learn,” she says, “the only way to get better is to speak in front of an audience.”

A version of this story appeared in the spring 2012 edition of Arts & Sciences.

Teaching the Art of Public Speaking