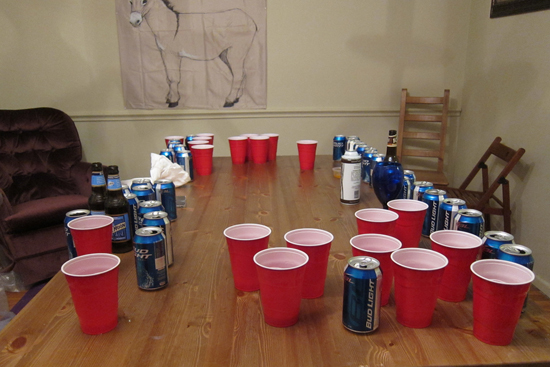 SPH’s Michael Siegel says the research on youth alcohol marketing is similar to that done on smoking, which In 1998 resulted in an agreement between major U.S. tobacco companies and 46 states specifically banning the targeting of youth. Photo by flickr contributor tetradtx

Bud Light, Smirnoff, and Budweiser share a distinction that may make their corporate owners wince: they are among a relatively small number of alcohol brands that underage drinkers choose most.

This according to a first-of-a-kind report led by researchers at the School of Public Health, published online in Alcoholism: Clinical & Experimental Research. It is the first national study to identify the specific alcohol brands underage youth drink. The study authors, from SPH and the Center on Alcohol Marketing and Youth at Johns Hopkins Bloomberg School of Public Health, say that it has important implications for alcohol research and policy.

“We now know, for the first time, what alcohol brands—and which companies—are profiting the most from the sale of their products to underage drinkers,” says study lead author Michael Siegel, an SPH professor of community health sciences. “The companies implicated by this study as the leading culprits in the problem of underage drinking need to take immediate action to reduce the appeal of their products to youth.”

The study found that the top 25 of nearly 900 brands account for nearly half of youth alcohol consumption. In contrast, adult consumption is much more widely spread among different brands.

Of the top 25 consumed brands, 12 were spirits brands (including 4 vodkas), 9 were beers, and 4 were flavored alcohol beverages.

The researchers surveyed 1,032 young people, ages 13 to 20, using an Internet-based questionnaire. Respondents were asked about their past 30-day consumption of 898 brands of alcohol, spread among 16 alcoholic beverage types, including the frequency and amount of each brand consumed.

“Importantly, this report paves the way for subsequent studies to explore the association between exposure to alcohol advertising and marketing efforts and drinking behavior in young people,” says David Jernigan, director of the Center on Alcohol Marketing and Youth and a study author.

Alcohol is responsible for 4,700 deaths a year among young people under the age of 21. More than 70 percent of high school students have consumed alcohol, past studies indicate, and about 22 percent engage in heavy episodic drinking. At least 14 studies have found that the more young people are exposed to alcohol advertising and marketing, the more likely they are to drink—or if they already drink, to drink more.

Siegel and the coauthors note that scientific literature lacks studies examining the link between youth exposure to advertising for specific brands and the consumption of those brands—something the researchers will tackle next.

“That is exactly the direction we are going with this research,” Siegel says. “We are now in the process of collecting the data, and our next step will be to examine the relationship between the advertising data and youth brand preferences.”

The research examining alcohol marketing to youth, he says, is similar to earlier work done around smoking, which identified certain companies that were specifically trying to target young smokers. After years of pressure from antismoking groups and the Federal Trade Commission, the Camel brand ended its popular cartoon-based “Joe Camel” campaign in 1997. In 1998, the major U.S. tobacco companies and 46 states signed a settlement agreement that specifically banned targeting youth.

“It was this line of research, into the relationships between brand-specific advertising and underage smoking, that provided the strongest evidence that marketing was affecting youth habits,” Siegel says. The study authors say their work could similarly inform policy efforts to reduce underage drinking.

“Alcohol prevention programs and policies can now target specific brands, and advocacy efforts can focus on specific companies that manufacture the products most involved in problem drinking behavior among youth,” they write in the study.

Siegel says that one surprising finding of the new study was that several brands of flavored alcohol—among them Smirnoff’s malt and Mike’s—were very popular with young drinkers, yet not similarly favored by adults. Many other drinks that ranked high in the survey also are popular among adults, as expected.

“It really begs the question: what is it about these brands that makes them disproportionately popular among underage drinkers?” Siegel says. “We want to look into the reasons—and certainly one of the potential reasons is marketing.”

The work of the SPH and Bloomberg School of Public Health researchers examining the links between youth drinking and marketing is being funded by a four-year, $2.4 million grant from the National Institute on Alcohol Abuse and Alcoholism. Previous studies led by Siegel have examined consumption patterns among underage drinkers, as well as alcohol advertising in magazines and on the Boston MBTA.

The full study is available here.