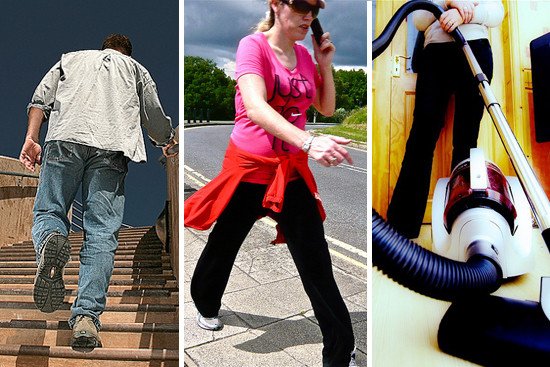 BU-led research suggests that exercise stretches of less than 10 minutes, including everyday activities like cleaning, can keep you trimmer and healthier as well.

Couch potatoes of the world, arise. You don’t have to go all the way to the gym for a workout. Cleaning the room for a few minutes can do the trick, too.

Conventional medical wisdom preaches 150 minutes of exercise a week, in bouts of 10 minutes or more, for sound heart health. But BU-led research recently produced, um, heartening news: meeting that weekly quota with exercise stretches of less than 10 minutes, including everyday activities like cleaning, can keep you trimmer and healthier as well. And for lead researcher Nicole Glazer, that’s welcome news in a nation where being sedentary has become a religion for many.

“When you think about 150 minutes per week, that can seem completely insurmountable,” says Glazer, a School of Medicine assistant professor. “But this study really speaks to the idea that some activity is better than nothing. Parking a little bit farther away, getting off the bus one stop early—all of these little things can add up and are related to a healthier profile.”

Glazer led a team of researchers at BU and other schools, whose paper was published in the journal Medicine & Science in Sports & Exercise. More than half the 2,109 subjects were overweight, and their average age was 47. The scientists attached accelerometers (motion detectors) to each of them for eight days: 56 percent of the men and 47 percent of the women met their weekly exercise quota. But while some did so with the prescribed 10-or-more-minute exercise sessions, the average subject met the quota with significant amounts of activities that were shorter than 10 minutes. Their exercise ranged from the vigorous (hiking, jogging, sports, shoveling, and farm work) to the moderate (brisk walks, heavy cleaning, and sports like badminton and golf).

The upshot: those who exercised 150 minutes a week, irrespective of the length of their workouts, had smaller waists, lower body mass index, better cholesterol, and lower triglycerides than subjects who didn’t complete the weekly exercise quota.

“This idea of lifestyle activity is one that is under-measured in research studies,” says Glazer, which means that we know little about the benefits of under-10-minute bursts of exercise. “But you certainly are expending more energy standing than sitting, and walking than standing, and running than walking. Your heart rate is probably not skyrocketing, but you are certainly expending more energy.”

Glazer’s study subjects were already enrollees in the Framingham Heart Study, a long-running multi-institution, multigeneration epidemiological study of cardiovascular disease begun by the National Heart, Lung and Blood Institute in 1948 and run by Boston University since 1971. (The study participants are the grandchildren of Framingham’s original subjects.)

A Stanford- and University of Washington–trained epidemiologist, Glazer keeps lean with traditional exercise routines (running and swimming), but she also tries to incorporate shorter activity into her daily life. For example, she often walks places, forswearing a car. She prefers stairs to elevators and walking to chat with people rather than emailing them. She keeps one of those large inflatable exercise balls under her desk at work. “You need both” exercise routines and short activity bursts, she says, “and you should incorporate both.”

As for whether the study might give the exercise-challenged another excuse to skip the gym, Glazer’s not losing sleep over it.

“The levels of sedentary behavior in this country are alarming,” she says. “So the concern that someone’s going to stop exercising and instead just get off the bus a stop earlier, that’s not my concern. The real concern is, is this a stepping-stone? Is this the way we can get inactive people to do any sort of activity? People will come up with any excuse to not exercise. I don’t need to worry about my giving them one. They’ll be able to think of something.”

There are 2 comments on Lazy Person’s Guide to Exercise