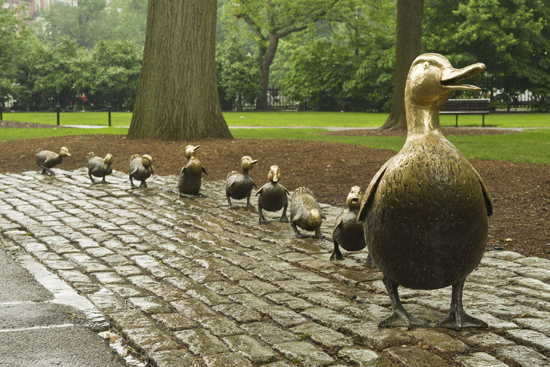 If the new outdoor mural in the CFA parking lot at 855 Commonwealth Avenue has you jonesing for more public art, you’re in luck. Boston is full of statuary and mosaics guaranteed to satisfy any taste.

And finding them just got easier. The Boston Art Commission, working with the office of Mayor Thomas Menino (Hon.’01) recently published Boston’s first edition of Public Art Walks, a guide highlighting 100 public art pieces—most of them three-dimensional—scattered throughout the Back Bay, Beacon Hill, the Financial District, and the North End.

Of the 100 pieces on the list, eight were made by BU alums, the most famous being Nancy Schӧn’s Make Way for Ducklings, a bronze sculpture of a family of ducklings inspired by Robert McCloskey’s classic children’s book and installed in the Boston Public Garden in 1987 to commemorate its 150th anniversary. Schӧn (DGE’48) has the distinction of appearing twice on the Public Art Walks list. In 1994 she designed The Tortoise and the Hare to celebrate the Boston Marathon, held each April. The silicone bronze sculpture can be found in Copley Square at the corner of Dartmouth and Boylston Streets, near the marathon’s finish line.

Works of art on the list were chosen not only to reflect a variety of artistic styles, but to mirror some of the key cultural, social, and political events and debates that have shaped both Boston and the country. Among the celebrated art on display are monuments celebrating patriots (Samuel Adams, Alexander Hamilton, and George Washington), abolitionists (Charles Sumner and William Lloyd Garrison), military heroes (Robert Gould Shaw and the 54th Regiment), and notable Puritans (Mary Dyer and Anne Hutchinson).

For a complete list of the art featured in Public Art Walks as well as their locations, download this printable map. The tour is self-guided so you can do as much—or as little—as you want at one time. You can also learn more about the works you’re seeing by calling 617-231-4053 for a guided audio tour that offers lots of fascinating information, including the inspiration behind each piece and stories about each artist.

The Boston Art Commission has also created an interactive map that features all the work included on the Public Art Walks list as well as other temporary and permanent public art works on display throughout the city, two of which, Free at Last and Explosion by Sergio Castillo, can be found right here on campus. The first, dedicated to Martin Luther King Jr. (GRS’55, Hon.’59), can be found directly in front of Marsh Chapel; the second is located in front of the College of Engineering.

Just remember to wear comfortable walking shoes and bring lots of sunscreen and water before embarking on your art adventure.

You can download the full version or printable version of the Public Art Walks map and guide. Hard copies of the map and guide can be found at The Mayor’s Office of Arts, Tourism and Special Events (Room 802 of City Hall) and the Visitor Centers in the center court of Prudential Center and on the Boston Common at the start of the Freedom Trail on Tremont Street. For an audio guide of the walk, call 617-231-4053 and follow the operator’s instructions.

Maddie Rosenberger can be reached at mustlove@bu.edu.

There are 2 comments on Discovering Boston’s Public Art