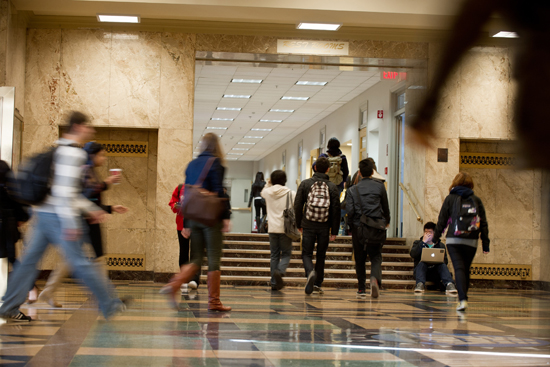 Nearly a fourth of BU students suffer from depression or anxiety, reflecting a national trend, according to the 2012 Healthy Minds Study. The encouraging news is, more students are seeking help. Photo by Kalman Zabarsky

Depression and anxiety remain serious problems affecting nearly a quarter of BU students, according to data from a 2012 mental health survey—statistics that reflect a national trend. But there is encouraging news: more students are seeking help. And the University has stepped up efforts to identify and treat students in crisis.

Of the 1,696 undergraduate and graduate students responding to the 2012 Healthy Minds Study, 20 percent screened positive for anxiety or depression and 6 percent reported serious thoughts of committing suicide in the past year. While that number has remained steady since February 2010, the last time BU participated in the Healthy Minds study, the so-called “help gap” has narrowed, with 55 percent of troubled students receiving help as opposed to 46 percent in the earlier study.

The Healthy Minds Study, a collaboration of researchers based at the University of Michigan, is an annual national email survey that examines mental health issues among college students. The BU study is a partnership between Student Health Services (SHS) and the University of Michigan School of Public Health. Data collection for the 2012 BU study, coordinated by David Seeman, a Behavioral Medicine senior staff psychologist, was part of a national sample of 25,000 students at 29 universities.

“BU is a caring community, and what we’re doing is working,” says Dori Hutchinson (SAR’85,’96), a Sargent College associate clinical professor of occupational therapy and director of services at the BU Center for Psychiatric Rehabilitation. On National Depression Screening Day last October, BU held its fourth annual screening for depression, where students, faculty, and staff on both the Charles River and Medical Campuses can avail themselves of free, confidential screening and have the chance to speak with a clinician, who makes referrals to counselors and advises people on where to seek help.

“The first year, we referred 30 percent of those screened,” says Hutchinson. “This year, it was 65 percent. When we set up at the sites this year, students were waiting for us.” Hutchinson recalls that 10 years ago BU mental health services were marginalized, and there was a strong stigma associated with getting help. While the stigma endures, particularly in a few groups, this has changed dramatically, she says.

Students now can choose from a range of resources, including SHS Behavioral Medicine and Wellness and Prevention Services, the Center for Psychiatric Rehabilitation, the three-year-old Student Support Network, and the mental health advocacy group Active Minds. The University trains student health ambassadors, undergraduates who serve as liaisons between students and SHS.

BU faculty and staff are increasingly knowledgeable about these resources, and Kenneth Elmore (SED’87), dean of students, has made student mental health a priority by meeting regularly with campus mental health professionals.

“It’s a cultural change,” notes Hutchinson. “The University has made an investment in students’ well-being. BU has a wide continuum of responses.” Kids are struggling, she says. According to national statistics, student stress stems mainly from four areas—academics, family issues, finances, and relationships. But faculty, staff, and students are more alert to the signs of depression, anxiety, or other mental health problems. These include declining grades, isolation from friends and family, inability to concentrate, eating or sleeping excessively or not enough, risky sexual behaviors, and alcohol and drug use.

The BU study found that 53 percent of respondents reported having at least one day in the past month where emotional difficulty had impaired their academic performance, and 24 percent three or more days, a result fairly consistent with the 2010 study, whose responses were 51 percent and 21 percent, respectively. Of students who considered interrupting their studies at BU, 21 percent cited mental health concerns as the reason. Of students who screened positive for depression at the time of the 2012 study, 45 percent had received either medication or counseling during the past year, compared to 37 percent of those who responded to the 2010 study—a statistically significant difference, according to Seeman. Of students who received counseling, 58 percent were seen at Behavioral Medicine.

Despite efforts to heighten awareness that depressed students need not suffer in silence—“Tell Somebody” is Behavioral Medicine’s mantra—the 2012 study found that 22 percent of students didn’t know there were mental health services available at BU. Yet responses to open-ended questions in the survey paint a mostly positive picture of Behavioral Medicine at BU.

“Student Health Services helped in my improvement through providing psychiatric help,” wrote a female undergraduate. “My insurance doesn’t cover costs in Massachusetts so their care was essential.” A female graduate student hospitalized for major depression while studying at BU reported that “academic staff in my department and Behavioral Medicine were helpful and supportive; they gave me the necessary privacy and respect that helped me remain in school.” Other students credited Behavioral Medicine with providing regular counseling when they couldn’t afford to see outside therapists.

One consistent complaint received by Behavioral Medicine over the past few years is the lack of mental health resources on the BU Medical Campus. “Setting up treatment is difficult for students due to complications of getting to the Charles River Campus,” wrote one male graduate student.

No one knows why nearly a fourth of college students nationwide suffer from anxiety or depression. Maybe these disorders are identified more as their stigma is shed. Certainly the level of stress at a university such as BU accounts for some of this data, says Seeman. Or perhaps social lives spent increasingly online are taking a toll on real relationships—the inexorable replacement of friends with “friends,” he suggests. Students are also more likely to come to college with preexisting mental conditions because of the increased use of medication earlier in life, he says. Experts say that another factor for the numbers could be that the current generation of students feels more pressure to succeed, but has developed less resilience because of cultural changes—although this is difficult to verify.

For psychologists like Seeman, who are trying to make sense of a wide range of variables, the depression among young people poses a challenge. But the real news is that for students who are struggling, there is help.

It appears that stress, depression, and anxiety may hit some groups of students harder than students overall, says Seeman. For example, the BU data from the 2012 study indicate that nonheterosexual students struggle more with emotional issues such as anxiety, depression, and suicidal thoughts than do students in general. But these students are also more aware of needing help than other students and are making more use of therapy or medication, he says. On the other hand, international students and Asian-American students tend to be less aware of resources for help for mental health problems and tend to use therapy and/or medication less often. “Clearly this information will help us target outreach to these particular groups,” Seeman says.

“We are doing fairly well in supporting students in distress, but there are some gaps which could be collaboratively addressed—some in the form of stigma, some in lack of knowledge,” the report says. “We expect that the data from this effort will help improve the lives of present and future students at Boston University and nationwide.”

Among the psychological services available for students suffering from anxiety is the Center for Anxiety and Related Disorders, founded by David H. Barlow, CAS professor of psychology. The center offers cutting-edge treatments for faculty, staff, and students, as well as non-BU affiliated individuals. “We make every effort to expedite services to our own BU family, first and foremost”, says Lisa Smith, director and clinical associate professor. Clinical services are offered on a sliding scale fee with numerous programs offering free services to those who are eligible.

Active Minds at BU is a student organization that works to increase awareness of, provide information and resources about, and encourage others to seek help for, mental health issues.

There are 19 comments on Depression, Anxiety Persistent Problems at Universities