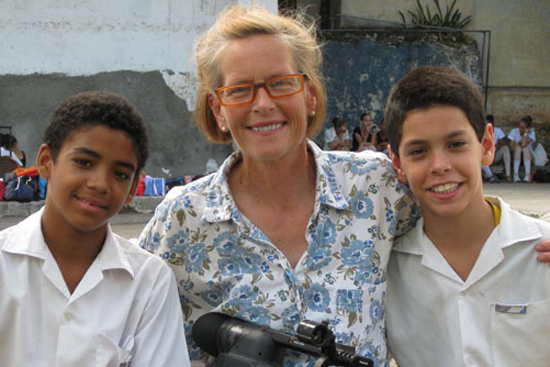 Mary Jane Doherty knew virtually nothing about ballet back in 2006 when she came across a short article in the New York Times reporting that 14 Cuban ballerinas had defected to the United States. Doherty, a documentary filmmaker, knew that the subject would make for a gripping and visually compelling film. “I thought, what are ballerinas doing in Cuba?” says Doherty, a College of Communication associate professor of film. “That’s how naïve I was about the country and about ballet.”

Over the course of 21 trips to Havana between 2006 and 2011, Doherty followed a class at Cuba’s respected National Ballet School, which has more than 3,000 students. Her film, Secundaria (High School), explores the ballet world and how students at the school depend on dance to escape poverty. A brave few hope it will be their vehicle out of communist Cuba. Doherty was the director, coproducer, editor, and cinematographer, with assistance from the film’s coproducer, Lyda Kuth.

Tonight, Doherty will screen Secundaria at 7 p.m. at the College of Communication, kicking off this year’s BU Cinematheque series, a COM program that brings accomplished filmmakers to campus to show and discuss their work. Among previous years’ guests have been directors, writers, actors, and editors who have worked on films like The Terminator and television shows such as Mad Men and True Blood.

Doherty is an award-winning freelance editor, director, and cinematographer. Her past projects include a short film for former Vice President Al Gore, a feature-length documentary on organized religion, and an experimental documentary on rapid land use change in China. She is also a two-time finalist for a Metcalf Award for Excellence in Teaching, BU’s highest teaching honor. BU Today spoke to Doherty about her film, her career, and her love of Cuba.

BU Today: How did you turn your idea of filming ballet in Cuba into a reality?

Doherty: From that tiny little blurb in the New York Times, I pretty much instantly decided that there was a movie there, because it had visual elements built into the story. But I didn’t have any idea whatsoever what the movie would be about. I jumped on a plane and went down there by myself, with no connections. I wandered around Havana until I found someone who was connected to the ballet program, and then I went into the director’s office and asked if I could film. I told her how the story of ballet couldn’t be transformed into words, it has to be visual. And she said, “Of course, how else would you make a movie about dance?”

You teach a COM course on narrative documentary filmmaking. Is this the style you used with this film?

My way of making films is to take the approach of a journalist. It means putting myself into a situation and letting the story and the characters drive the coverage. I had no idea what Secundaria would be about, just that it would be a sensual experience, like being there.

Some filmmakers focusing on sports or competitions shoot the winners first and tell the story backwards, making it look like a wonderful coincidence that they had been following the winners all along.

It makes sense because it’s difficult to predetermine who the characters will be; some competitions have hundreds of people. But I was interested in what it felt like to be a ballerina, and how there was far more at stake than just learning how to dance.

The irony is that the one character I did pick is the one who actually did the most dramatic thing, and that was a complete coincidence.

Spoiler alert! You’re talking about Mayara, a young ballerina who defects to the United States. How did you feel when you first realized what she had done?

I had a body drain of blood. I was looking through the viewfinder and watching all of the dancers go by in the airport in Havana. I’m counting them off and she’s not there. I went into a panic.

Did you know that this moment would be the film’s climax?

It was a thousand emotions at once. You never want to stop and assess the moment because that means you are not in the moment. My first concern was what her mother was going to do. I raced back to her mom’s house, and the family was assembled, and that’s when I figured that her mother must have known in advance what was going to happen to her. I was dealing with these emotions in the present. On a deeper level I realized that the movie had changed, turned a corner. But I had to struggle with filming this terrible, intimate moment in this family’s life; it seemed so crass. But on the other hand, this material tells the entire story of Cuba.

What were the challenges of filming in Cuba?

Getting in and out 21 times, getting mugged twice, and the ping-pong sensation of exhilaration and despair. It is such a beautiful place, and the people are wonderful, but at the same time there is such sadness.

Was it difficult filming the dancers’ movements and jumps? Did you learn to anticipate how they would move the more you filmed?

It took a while; I had to learn a bit of ballet since I knew absolutely nothing. But I would be out on the floor with them in rehearsals, so I eventually knew the mark that a ballerina was going to hit so I’d have the camera there. I would scrunch down and wait for her to land in the frame. I knew how to move with them sometimes and then allow the frame to be steady so they could create movement within the frame. The nice thing about ballet is that it is repetitive and if you mess up you get to do it again.

Did you have time to build a close relationship with the people you filmed?

The thing about Cuba is access. When they finally agreed to let me in, they had almost no barriers to filming. Any personal barriers that Americans generally erect just weren’t there. The people embraced me so fully. I was in every class, in their homes, and not once did someone raise their hand and say, “Nope.”

Does this trust say something about the people of Cuba?

Yes. It’s 50 years of Castro—Cuban identity means you are part of a community first, and maybe on the third or fourth level you are an individual. They have been raised in an environment where they don’t have that sense to guard themselves as Americans do.

You shot enough footage for two films—Secundaria and another movie you’re working on, Primaria. Did you set out to do that?

I’m just finishing Primaria, which is about three children coming of age in an elementary ballet program. When you see it all compressed into a movie, it’s the age-old story of growing up, and what’s great is that it doesn’t need any narration. You get to see them starting out as shrieking 8-year-olds; you can’t believe it when you look at a tall and graceful 15-year-old ballerina.

You are on sabbatical this year. What have you been working on?

I’ve been finishing Primaria and writing a book with everything that couldn’t go in the movies. There is a group of people—and their opinion is valid—who believe that the movie raises more questions. They’re not interested in the poetry of the movement; they want to know what the hell happened. I’m going to do the backstory in words, about the racism more than anything else.

In the Cuban classical ballet world, they select Cubans of Spanish origin over Cubans of African origin. One of the characters in Secundaria becomes the top dancer, but he doesn’t make it into the professional company, and it’s because he’s black and he’s poor. You look at the professional company and you see a line of white Cubans, and you ask why the school would encourage so many students and take them through this grueling training, and then not give them the payoff of the company at the end.

Do these dancers have any other options?

How hard is it to make and distribute an independent movie these days?

It’s a complicated answer because technically it’s easier than ever before to go out and make a movie because the equipment is accessible. The curator of Sundance told me that last year he received 12,700 submissions. It can be a swamp. In the old days of film you would really have to come up with hundreds of thousands of dollars to make anything of broadcast quality.

The good news is that people are really exploring the form and exploring ways of telling stories, so things are changing. I love to see the different kinds of movies coming out, and the chance of seeing something new is much higher.

What advice do you have for aspiring filmmakers?

Does being an active filmmaker make you a better teacher?

I could not stand in the classroom without making movies. It’s not an intellectual task as much as it is a full body task. To talk to students about what it means to make a movie, I have to be speaking from experience. I love my students and their energy, and we teach each other. How could I expect them to learn from me if I can’t learn from them? And that means we all need to be out there making movies.

Secundaria screens tonight, Friday, September 13, at 7 p.m., followed by a talk by Mary Jane Doherty, at the College of Communication, Room 101, 640 Commonwealth Ave. The event, part of the BU Cinematheque series, is free and open to the public.