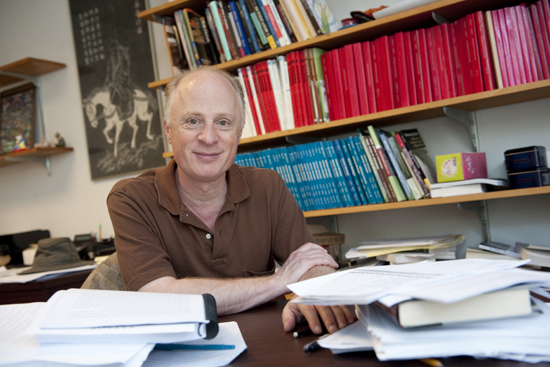 Robert P. Weller, a CAS professor and chair of anthropology and a research associate at the Institute on Culture, Religion & World Affairs, is among 175 scholars, artists, and scientists chosen to receive a 2013 Guggenheim Fellowship. Photo by Vernon Doucette

For more than three decades, anthropologist Robert P. Weller has studied contemporary culture in China and Taiwan, a field broad enough to include anything from politics and rebellions to ghosts and Chinese landscape painting. He has long been fascinated with ritual and has written extensively about religion and authority.

Weller, a College of Arts & Sciences professor and chair of anthropology and a research associate at BU’s Institute on Culture, Religion & World Affairs (CURA), was recently awarded one of academia’s highest honors: a fellowship from the John Simon Guggenheim Memorial Foundation. Guggenheim Fellowships are awarded to men and women who have “demonstrated exceptional capacity for productive scholarship or exceptional creative ability in the arts,” according to the foundation’s website. Fellows are appointed on the basis of “prior achievement and exceptional promise.” Weller is among the 175 scholars, artists, and scientists from Canada and the United States chosen this year from a pool of nearly 3,000 applicants.

“A Guggenheim Fellowship is one of the most prestigious awards a scholar can get, especially outside the natural sciences,” says Virginia Sapiro, dean of Arts & Sciences. “It is a sign of Rob Weller’s substantial accomplishments and recognition as a major figure in anthropology, and a well-deserved opportunity for him to make substantial progress on his next book.”

The yearlong grant will allow Weller to spend the next year traveling back and forth to China, where he will continue his study of religious pluralism. Weller says China has long had both polytheistic and monotheistic traditions, as well as the official atheism promoted by the government since the revolution in 1949. “As China has loosened controls over the past few decades,” he says, “all of these traditions have begun to interact in new ways.” He will look at what is happening on the ground as all of the traditions interact with one another. He hopes to determine whether religions in China are “helping to build bridges between groups of people or erecting walls that divide them.”

The funding will also enable Weller to investigate how the Chinese state and the Communist Party are dealing with the different religious traditions that today are changing the face of China.

“The massive labor migrations of the past two decades have brought together people with very different religious traditions, as people from all over China move to the wealthier areas of the east, including large numbers of Muslims from China’s northwest,” says Weller. “Foreigners from all over the world have also contributed to the new diversity.”

Weller says his research is a continuation of work on more theoretical issues that he’s been exploring for some time with CURA colleague Adam Seligman, a CAS professor and chair of religion. The two have written a book, Rethinking Pluralism: Ritual, Experience, and Ambiguity, published last year, that examines the ways contemporary societies have confronted pluralism. “We are interested in how ritual can help cross boundaries as well as create them, and how we can sometimes just set our boundaries aside temporarily,” Weller says.

He plans to spend the early weeks of research identifying two field sites—one urban, one rural—in the area around Nanjing, in Jiangsu Province, where he can observe religious life closely. He chose Nanjing because it is a large city, but more manageable than Beijing or Shanghai. Its geography was also important. “I wanted an eastern city because those are where most of the migrants are going,” says Weller. The city also offers an established and important Muslim community to study.

It’s an excellent time to study religious pluralism in China, Weller says. The Chinese government recognizes only five religions, “each organized into an official organization with close ties to the government.” Not only does the government not recognize the local temple religion practiced by several hundred million Chinese, he says, it also fails to recognize Confucianism and many religions with a smaller number of adherents, like Baha’i, Judaism, and Eastern Orthodoxy.

“The Chinese government is allowing all of these things to grow in a kind of legal gray zone—not so much illegal as just extralegal. They know perfectly well that their official policies make little sense on the ground,” says Weller, who hopes to publish his research next year.

“All of us who work on Chinese religions would be pleased to see a government less anxious about religion and more open to the religious creativity and innovation that we see elsewhere,” he says. “What can be more important than understanding the ways people can accept real differences between them and still live well together, and the processes through which those mechanisms sometimes fail?”