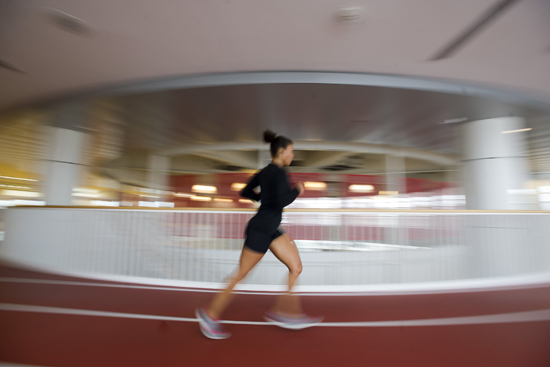 According to a recent survey, of the 40 percent of Americans who make New Year’s resolutions, only 8 percent keep them longer than a few weeks. Photo by Cydney Scott

If you’re like most people, surveys show that right about now, you’ll forget to remember the New Year’s resolutions you made five weeks ago. One such study, done in December by researchers at the University of Scranton, found that 40 percent of Americans make New Year’s resolutions, but only 8 percent keep them for longer than a few weeks. The good news? Those who do make it over this hump are more likely to stick with the goals for the entire year.

Sticking with the food part

Joan Salge Blake (SAR’84), a Sargent College clinical associate professor of health sciences, says a big reason resolutions go by the wayside is because people become disheartened when they don’t see immediate physical improvement. The solution, she says, is to lower your expectations, at least in the short run. She suggests breaking your big fitness goal (“become healthier” or “lose weight”) into smaller, more manageable chunks. Instead of planning to run a marathon in three months, she says, set your sights on a doable 5K.

Want to lose weight? Salge Blake tells us to ignore diets that promise losses of five pounds a week. Instead, aim for a realistic loss of one pound or less each week.

Most people can do that, she says, by adding fruits and vegetables to their diet. “Try to crowd out higher calorie food like fatty meats or energy- and calorie-dense grains,” she advises. “Grains aren’t bad, but you don’t want them to overcrowd the plate.”

She also suggests starting a meal with a cup of vegetable soup. “You are adding something to the meal, and it’s positive,” she says. “It also helps you pace the meal. You’re not hungry going into the meal; you’re eating something that is warm and comfy and strategically placed during the eating pattern.”

Salge Blake is a fan of a self-administered reward program. She recommends keeping a glass jar in your kitchen and every time you do something healthy—like walking instead of taking the bus or forgoing the extra cheese on the pizza—put a dollar in the jar.

“At the end of the week do something fun,” she says. “Maybe a manicure or a concert. Every day you look at that jar, it’s really motivating to think how many changes you have made, how full the jar is getting. Don’t reward yourself for the missing pounds, but reward yourself for your positive lifestyle changes.”

Sticking with the exercise part

The same “realistic expectation” rule applies in the gym. Michael Lagomarsine, fitness manager at the BU Fitness & Recreation Center, has seen many people try to do too much too soon, and end up doing more damage than good.

“If you aren’t ready for that intensity, you won’t reach those positive results you’re looking for,” he says. Better to try to make exercise part of your daily activities. “Schedule it just like you would a work meeting in Microsoft Outlook.” That way, you can work around it and make it a priority. And don’t be discouraged if you miss a few days, he says. Pick up where you left off.

The U.S. Department of Health & Human Services recommends 150 minutes of exercise a week, in bouts of 10 minutes or more, for sound heart health (BU-led research recently found that exercise stretches of less than 10 minutes, including everyday activities like taking the stairs or cleaning, are also effective).

For most people, the feds’ advice means going to the gym a few times a week. Using an elliptical, then a bike for 40 minutes can get boring, so Lagomarsine suggests a game of squash or a dance class. The more fun the exercise is, he says, the more likely you’ll come back soon and do it again. “Play pickup basketball for 20 minutes,” he says. “It has the same heart effects as using the treadmill, if not better. Just don’t forget to add the strength training component for 20 minutes after you have stopped playing.”

Lagomarsine recommends telling your friends about your resolutions, and asking them to encourage you to keep with it. Got no friends willing to guilt-trip you? Use a smartphone app (no smartphone? Use a pen and paper to track your progress).

Using an app that allows you to enter your daily routine, the one tailored to you, rather than a general workout plan is also a good idea, he says. After every workout, record what exercises you did, how many repetitions. Make notes of how much weight you have lost and how your endurance has changed. You can then go on to make changes specific to your goals.

Another thing that helps us keep on track, says Lagomarsine, is a consultation with an expert. Trainers at FitRec, for example, offer a personalized fitness evaluation for about $60. The comprehensive evaluation consists of cardiovascular assessment, muscular strength and endurance tests, body composition analysis, and a flexibility test. It also lets you know how you compare to others the same age and gender. If the comparison doesn’t motivate you, knowing that you just spent $60 to find out what you need to do might do the trick.

About Those New Year’s Resolutions