In the video above, Sassan Tabatabai (CAS’88, GRS’94,’15, UNI’00)—poet, teacher, and scholar of Persian literature—speaks about his passion for boxing. Photos by Melody Komyerov View closed captions on YouTube

Among Sassan Tabatabai’s many talents, including those as a poet, a teacher, and a translator and scholar of medieval Persian literature, is the ability to time three minutes in his head accurately within a nanosecond. Call it a gift or a curse, this is what happens when a man gets hooked on boxing.

Since he was in graduate school at BU, Tabatabai (CAS’88, GRS’94,’15, UNI’00), a College of Arts & Sciences department of modern languages and comparative literature lecturer in Persian and a humanities instructor in the Core Curriculum, has thrown himself into sparring, coaching, and recently, refereeing. Although these days his time in the ring is devoted mainly to coaching, as a fighter he was dubbed “the Professor.” He was pummeled, as he puts it, in his first fight, and later found out why: “I saw my opponent from that night in a boxing magazine ranked as a top 10 professional fighter in all of New England,” says Tabatabai, who picked himself up and went on to win his second and third fights. He stopped competing altogether after the death from cancer of his first trainer and mentor, Mikhael Grigoryan, who had been the boxing coach of the Olympic team in the former Soviet Union. 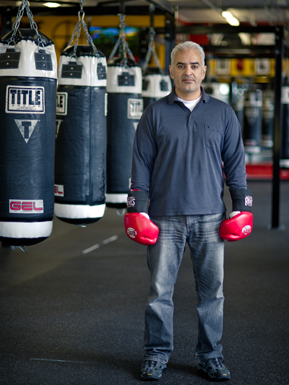 A licensed coach with the U.S. Amateur Boxing Federation, Tabatabai was drawn to boxing because it offers a workout that’s never boring.

Born in Tehran, Iran, Tabatabai has lived in the United States since 1980. He is the author of Father of Persian Verse: Rudaki and His Poetry. Fellow poet Rosanna Warren, BU’s Emma Ann MacLachlan Metcalf Professor of the Humanities and a CAS professor of English and romance studies, has described his verse as works of “delicate mourning, exile, and love”—“sensuous, rueful, and clear.”

For much of the past year, Tabatabai, poetry editor of the Republic of Letters, a literary journal cofounded by Saul Bellow (Hon.’04), has been deep into the painstaking, often emotional work of translating the memoirs of his grandfather, Assadollah Tayefeh Mohajer, who served in the Iranian army until the Islamic Revolution of 1979. Coaxing a narrative out of 300 or so pages of Persian script handwritten on paper from legal pads to Post-it notes, Tabatabai gathered the material as the foundation for his editorial studies thesis at BU’s Editorial Institute for what will be his second doctorate; he has degrees in political science, international relations, and Persian literature and history. Boxing and coaching are liberating antidotes to this exacting pursuit, he says.

Tabatabai works out and coaches at the Ring, a boxing club on Commonwealth Avenue, next door to the Paradise Rock Club. It is a congenial place, a cheerful expanse of rings and workout space pulsing with hip-hop music and the din of men and women panting and grunting as they spar, jump rope, or battle a punching bag, taking alternate left and right hooks at spitfire speed. His T-shirt growing increasingly damp as he goes through his warmup moves, from footwork to shadowboxing, 45-year-old Tabatabai explains breathlessly that he’s slowing down—age, work, and life intrude. “Now that I’m older it takes longer to loosen up the legs,” he says. “I used to work out three days a week, but now I get here whenever I can.” 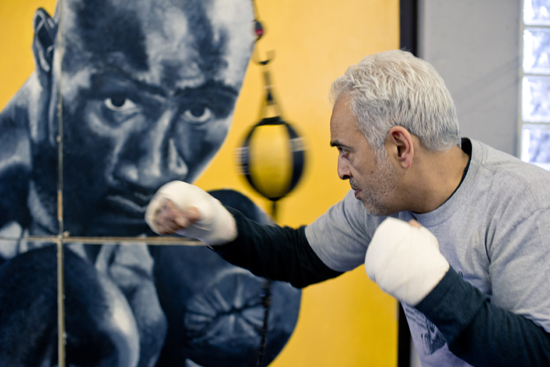 And although he is generally an upbeat person, boxing has something else going for it. It makes him happy. “Nothing fixes my mood like time in the ring.”

A version of this story originally ran in the summer 2012 issue of Bostonia.