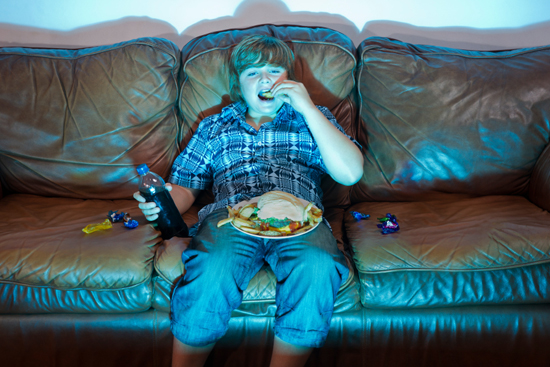 In part three of a four-part series on the nation’s obesity epidemic, BU Today spotlights the innovative research taking place at BU to better understand and solve this health problem.

The statistics on childhood obesity are grim. In 1974, only about 5 percent of American children were obese. Today that number is 16.9 percent. If you include kids who are overweight as well, the number reaches 31 percent. Children who are overweight or obese often have a host of health problems, from type 2 diabetes and asthma to high blood pressure and depression. They are also more likely to be overweight as adults. But the scariest thing of all is that nobody knows what has caused the epidemic or how to reverse the trend.

Daniel Miller, a School of Social Work assistant professor, has spent his career trying to figure that out. There are plenty of places to point the finger: too many video games and television, not enough school recess, ads for sugary cereals that target kids, high-fructose corn syrup, and super-sized fries. But none of these things can be the sole culprit. Complex problems like childhood obesity have no easy cause and no easy solution. “I think that we get into trouble when we try to default into simple explanations about what’s causing a very complicated thing,” says Miller. “It’s a lot of stuff together.”

Miller, a policy analyst, pores over huge sets of data, looking at different pieces of the obesity puzzle and trying to get a sense of the whole picture. He doesn’t have any answers—yet. But his long-term goal is to construct what he calls the “social ecology” of child obesity, putting the whole puzzle together and helping to influence policies that can change it.

His first foray into obesity began during his doctoral research on working mothers and how their employment may affect their families’ health. (Fathers’ employment seems to have little effect on child obesity, by the way.) “We know obesity has increased over time. What else has increased over time? Maternal employment,” says Miller. Other studies had suggested that the two trends were connected. He decided to investigate.

To do so, he crunched data from the National Longitudinal Survey of Youth, which is run by the Bureau of Labor Statistics, examining data on working mothers. Miller’s results were intriguing, but not straightforward. He found that children were more likely to be overweight at ages 9 to 11 and 12 to 14 when their mothers worked. But mom working when the kids were younger—ages six to eight—led to a decreased risk for obesity. In another study, which Miller coauthored with Wen-Jui Han of New York University, he found that children whose mothers worked either a few years or many years at nonstandard shifts were more likely to be overweight or obese at age 13 to 14. What’s going on? Miller isn’t sure, but he suspects that when a mother is working, younger children are being closely monitored by someone. Older kids, however, are more likely to be home alone, munching chips in front of the TV.

Other factors are at play, Miller adds, and they probably come down to choice, especially when it comes to shift work. If a mother works odd hours so she can make breakfast and walk the children to school, that’s an advantage for the kids. But if a mother has to work a poorly paid, stressful, or exhausting night shift, she may not have the time or energy to cook healthy meals or take the kids to the park.

Miller is quick to point out that his work is not about blaming working mothers for childhood obesity. “It’s not that working moms say, ‘Okay, now I’ve finished up my work. I’m going to make all these unhealthy choices for my family,’” he says. “It’s just that the way that our society is structured, it doesn’t support the working activities of mothers.”

And, he adds, even today, the brunt of housework and child care still falls to mothers.

“We’re not exactly clear about the story of how maternal employment gets to child obesity,” Miller says, but “it’s pretty clear that it has something to do with what happens at home.” He points out that it’s usually—although not always—moms who set the rules at home when it comes to meals, screen time, and eating behavior. “We’re still stuck in this relic of older, familiar patterns,” he says. “It persists today.”

Miller’s latest work, conducted with Sunny Shin, another SSW assistant professor, moves away from working mothers to focus on another question: whether physical abuse, sexual abuse, or neglect may lead to childhood obesity.

Shin and Miller examined data from the National Longitudinal Study of Adolescent Health (AddHealth), which collected data from 8,471 children and parents at four points in their lives. They found that kids who were abused or neglected were more likely to have higher body mass indexes as adolescents. This wasn’t particularly surprising, but as Miller notes, the results could have easily pointed the other way. “If a child is abused or neglected, they could have an eating disorder, not be fed correctly, or be malnourished,” he says.

But not all the trends were clear. “There was one thing that surprised me a lot,” says Shin. “We looked at all different combinations of different types of abuse. We expected that kids who had experienced all three things—physical abuse, sexual abuse, and neglect—would develop obesity, but that was not the case.” In other words, the most abused and neglected kids were the least likely to be overweight.

One explanation, says Shin, is that the chronically abused, extremely high-risk children got a lot of attention from child protective services very early on, and this intervention helped save them from some of the long-term effects of abuse. “Maybe the system is working, in some way,” she says.

This research on abuse and neglect is leading Miller to think about how the body responds to stress, and whether that may play a role in obesity. “Kids that are maltreated are exposed to tremendous duress and stress,” he notes. “And there’s very clear findings from the literature that stress is awful for you…it can harm your body.” Miller suspects prolonged stress may lead to biological and behavioral changes that promote obesity. So far, he says, there’s little data to back up the idea, so the area is ripe for study.

Where will Miller’s work lead? Hopefully, he says, to comprehensive policies that can fight childhood obesity from multiple angles. In the end, any new policies to tackle obesity will have to be coordinated and comprehensive in order to succeed, he says, and will have to account for the way a child’s environment affects both biology and behavior. “That’s the way that has to be framed,” Miller says. “It’s not that you’re making bad choices. It’s just that your choices are constrained by an environment that doesn’t allow you to make good choices all the time.”

It’s not an easy answer. But in the end, it may be the only answer that works.

Next, in part three of our series, “The Cure for Obesity: Fat?” Read the entire series here.

Solving the Childhood Obesity Puzzle, One Piece at a Time

There are 6 comments on Solving the Childhood Obesity Puzzle, One Piece at a Time

Solving the Childhood Obesity Puzzle, One Piece at a Time
6
share this