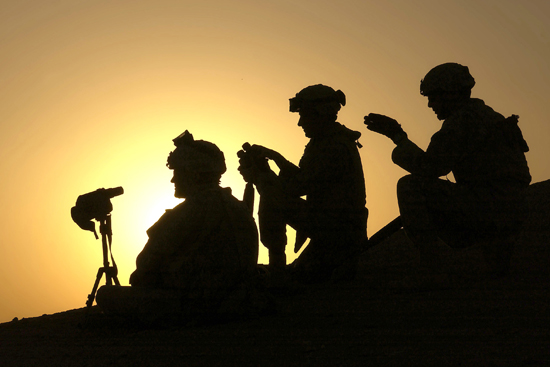 Since the early 2000s, when Operation Enduring Freedom and Operation Iraqi Freedom began, more than two million American soldiers have served in Iraq or Afghanistan. Of those, more than 15 percent—nearly 300,000 men and women—are expected to suffer from post-traumatic stress disorder (PTSD). The symptoms of PTSD can be debilitating, from flashbacks and nightmares to phobias and angry outbursts.

PTSD also increases the risk for alcohol abuse, with many vets drinking to dull their emotions or cope with stressful situations. The problem has existed for as long as there have been wars and alcohol. “The problems of PTSD and alcohol abuse are fairly similar across generations of combat veterans,” says Deborah Brief, a School of Medicine assistant professor of psychiatry, who has worked with veterans for 25 years. “It seems to be an unfortunate consequence for some veterans who have been deployed to a combat zone.”

Traditionally, therapy for PTSD and alcohol abuse teaches veterans how to control their drinking and also how to manage the symptoms of PTSD without alcohol. This approach has been successful, but for veterans who can’t—or won’t—seek in-person treatment, Brief and her colleagues have developed an innovative web-based application called VetChange, which brings the therapy to the soldier. The program, the result of collaboration between BU’s Schools of Medicine and Public Health and the VA Boston Healthcare System, is trying to reach veterans who are falling through the cracks. In its trial run, it has proven remarkably effective. “Our goal,” says Terence M. Keane, a MED professor of psychiatry and director of the Behavioral Science Division at the National Center for PTSD, “is to succeed where other programs never got started.”

Veterans today have a far easier time getting treatment for PTSD than have previous generations of soldiers. But traditional therapy usually requires them to meet with a group or individual therapist once a week for three to six months, or even longer if there are additional problems such as alcohol abuse. For some veterans, the logistics prove impossible. “Half of the people serving in war zones come from rural areas where there’s no specialty care available,” notes Keane. “A veteran isn’t going to drive two to three hours for a one-hour therapy session. It’s just not going to happen.”

There is another, more prevalent reason why veterans don’t seek therapy: stigma. Many veterans worry that psychological treatment will make them seem weak, hurt their military careers and chances of future employment, or invade their privacy. For this reason, says Brief, many veterans refuse mental health care, even when they are binge drinking or suffering symptoms of PTSD.

The research team thought a web program might overcome both these barriers. They turned to the School of Public Health. Working with Amy Rubin, a MED research assistant professor in the department of medicine, and Eric Helmuth, director of internet services for SPH’s health policy management department, they created a powerful team: investigators familiar with veterans’ needs and public health experts who know how to change behavior through social media. SPH has long been a leader in developing web-based screening and intervention programs for substance abuse, including QuitNet, begun in 1995, which has helped millions of people stop smoking, and AlcoholScreening.org, which was launched in the early 2000s and is still used by more than 250,000 people a year.

“We’ve been doing this stuff for a long time,” says David Rosenbloom, an SPH professor and chair of the health policy and management department. “We know it can be effective.”

VetChange consists of eight web-based modules, which take about 20 minutes each, and veterans are asked to complete one module each week. The modules follow the same pattern as a standard course of therapy. The first session, for instance, asks them to answer questions about their drinking habits and compares these to safe levels. Over the next seven weeks, the veterans keep a drinking diary and the computer graphs the data, giving them visual feedback on their daily and weekly drinking habits. As the modules progress, the participants create lists of personal goals, learn about situations that might trigger drinking or PTSD symptoms, and brainstorm ways to manage their emotions without alcohol.

The researchers found veterans through targeted ads on Facebook and were astonished by how quickly—and inexpensively—they were able to recruit volunteers for the study. “It was an amazing opportunity to do personalized recruiting,” says Keane. “We got right to the people we needed to find.” They enrolled 600 participants in only 46 days, filling the study in what Brief calls an amazing time.

But some researchers on the team were doubtful that veterans would actually come back week after week to complete the eight modules. “Internet lore held that interventions had to be pretty brief,” says Rosenbloom. “The early experience with websites was that people came once and never came back.”

Turns out, they did come back. And they got better. The program ran for a year, beginning in June 2011, treating the veterans in two groups—one that received immediate access to the web program and another that waited eight weeks to begin. The results were remarkable. When the study started, none of the participants in the first group were drinking within guidelines; by the end of the eight weeks, that number was 22 percent. Heavy drinking days among participants also decreased, from 32 percent to 18 percent, and the average PTSD symptom score showed a significant decline. Once the second group had access to the web intervention, the results were similar, and overall, comparable to those gained through traditional face-to-face therapy. “These were not small reductions in drinking—these were big reductions. It was very impressive,” says Rosenbloom. “I think this study shows that if you give people something that is useful and relevant to their lives, they will keep coming back to use it.” These effects lasted for at least three months after treatment ended.

One of the most surprising things in the study—in addition to the strong response—was that 62 percent of the soldiers who enrolled had already sought treatment for PTSD.

“We were stunned,” recalls Keane, who speculates that some of these veterans may have been receiving treatment for PTSD, but wanted additional help for alcohol abuse. “In the next study, that’s one of the things we want to examine more closely,” Brief adds. “Are people using it alone or as a supplement to traditional therapy?”

With the successful pilot study complete, what’s next for VetChange? Brief wants to replicate their findings and also add components to address other issues that are common to returning vets, like drug abuse, depression, and pain management.

The researchers are also planning to add a mobile app to the web program, allowing veterans to keep a real-time record of symptoms or drinking and get instant feedback. Keane says such modules could be widely applicable beyond veterans with PTSD, helping diabetics monitor their diets, for instance, or heart patients track their medications. But the primary goal right now is to create a revised version of VetChange that can be offered to veterans for widespread free use.

“This is a huge opportunity to help a large number of people very quickly and at very low cost,” says Rosenbloom. “It’s pretty big.”

Reaching Vets Falling through the Cracks