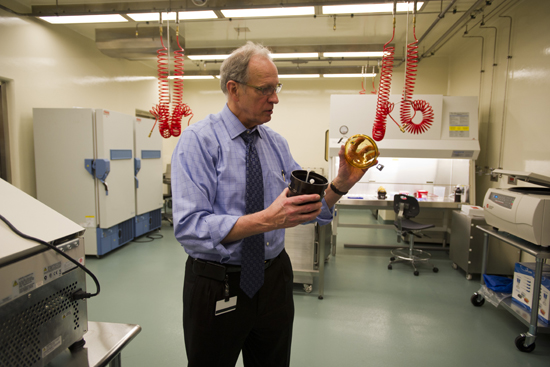 John R. Murphy and Ronald Corley may be the most highly educated tour guides in Boston.

Murphy, a School of Medicine professor of medicine and microbiology, researches the ways that bacterial protein toxins get into cells. Corley, a MED professor and chair of microbiology, investigates immune responses to viruses. But much of their time recently has been spent leading visitors through the many chambers of the National Emerging Infectious Diseases Laboratories (NEIDL), where Murphy is the interim director and Corley an associate director. In recent weeks, the researchers have given tours for hundreds of police, firefighters, and EMTs as well as politicians and press, including the Boston Globe, which produced a video of the facility.

The tours have become increasingly popular since NEIDL, where researchers hope to develop diagnostic tests, vaccines, and new drugs for some of the world’s most infectious or deadly diseases, was given clearance by the Massachusetts Executive Office of Energy and Environmental Affairs in December to conduct research at Biosafety Level 2, with work beginning as early as February.

The lab was not granted permission to conduct more sensitive Biosafety Level 3 or Biosafety Level 4 research. Corley estimates that BSL-3 clearance could come within six months after the state reviews an environmental safety report being prepared by the National Institutes of Health. The opening for BSL-4 research is harder to predict. Regulators and the courts must rule on that first, pushing the date to at least October 2013, state officials say.

The state’s approval marks modest and hard-won progress for the nearly $200 million labs, which have sat unused on the Medical Campus pending legal challenges and regulatory review since being completed in September 2008.

The most recent tour by Murphy and Corley was arranged for BU Today and the Daily Free Press, with the intention, says Murphy, of getting the facts about NEIDL’s safety and security measures out to the community.

For starters, the 193,000-square-foot facility is surrounded by an eight-foot security fence. The grounds and building are under nonstop watch. All who enter must pass an iris scan, a metal detector, an X-ray machine, and an explosion detection device. And that’s just in the guardhouse.

Inside the main building guards again check visitors’ identification, issue them badges, and hand them over to their hosts. In fact, from here on, every entry point to any floor or lab requires an iris scan and a security card.

Murphy leads visitors first to the Biosafety Level 2 laboratories, where researchers will work on generally non-life-threatening diseases like meningitis, tuberculosis, Dengue fever, and measles. He approaches a wall-mounted iris-scanning device. Unlike in a Dan Brown novel, where a character uses an extracted eyeball to outsmart security, says Murphy, “the eyeball has to be live,” and—obviously—attached to a human being. He then swipes his card to open the lab suite’s door and a ticker clicks as each person passes. This is to ensure, Corley says, that no one “piggybacks” through the door. If the count does not match the number of iris scans performed, security is alerted immediately.

The BSL-2 labs look like standard chemistry course fare. Benches fill half of the room. A neighboring, self-enclosed tissue culture room is equipped with a biosafety cabinet and hood, where researchers sit to perform all sensitive experiments. Test tubes are opened only under these hoods, where high-efficiency small particulate filters capture any escaping pathogens. Researchers, who must wear lab coats, gloves, and protective eye and face gear, are trained to never bring an unsealed container outside of the hood. Cameras are strategically placed to record some, but not all, procedures.

On another floor, there are five Biosafety Level 3 suites, where researchers will work on viruses like West Nile, SARS (severe acute respiratory syndrome), and HIV, pathogens that are being investigated in 11 other labs in and around Boston.

Before stepping inside, Corley points to a magnehelic gauge above the door. The device measures airflow and ensures air (and any pathogens it may carry) is always directed inward and not toward the hallway.

In the lab’s antechamber, a Tyvek beekeeper-like bonnet and a high-tech face mask hang on a wall. Researchers don this equipment, gloves, and booties before passing through another vacuum-sealed door, which opens only when the first door has been locked. The setup is similar to BSL-2 tissue culture rooms, except that every ceiling light and vent, equipped with more high-efficiency filters, is hermetically sealed, and every action is recorded by video cameras.

On the facilities floor, gleaming air filtration systems stand in seemingly endless rows. Murphy addresses visitors from a perch atop what he describes as a completely different building—Biosafety Level 4 area. “It literally is a building within a building,” he says, adding that BSL-4’s ceiling, walls, and foundation are made of “the most heavily rebarred concrete you can imagine.” The Level 4 lab also sits on independent horizontal beams that in case of an earthquake allow the building to vibrate independently of its neighbor.

NEIDL has backup generators and steam sources that would keep the facility fully functional for three days if there is a power outage, long enough to destroy or decontaminate any existing pathogens.

Finally, the group arrives at the floor housing seven Biosafety Level 4 labs, where researchers will study pathogens like the Ebola, Marburg, and Hendra viruses. Early on, Corley emphasizes that while these viruses are deadly, they are not all highly contagious. Most are transmitted through blood or mucus, not through the air.

BSL-4, Murphy says, is like “a submarine in a bank vault,” with 12-inch-thick walls to prevent leakage and to withstand regular formaldehyde and peroxide cleansing baths.

Here, visitors pass through an anteroom similar to the BSL-3 labs, then enter a room where baby blue space suits (at $2,600 apiece) hang from a wall. Researchers step inside and connect to a tube that feeds filtered air inside the suit, which “blows up like the Michelin blimp,” Corley says. They wear three pairs of gloves, one sealed with duct tape to the suit’s cuffs, and green garden boots.

Once dressed, researchers step through a double-doored shower chamber before arriving in the lab. More cameras are mounted on the ceiling alongside computer screens used for internal communication. Fire sprinklers, heat sensors, and an emergency lighting system aid workers in the case of a fire. NEIDL staff is currently working on a wireless communication system for BSL-4 researchers.

Before leaving the lab, suited personnel must pass through a seven-minute chemical shower, after which they remove their suits, place scrubs in a bag, and shower (again) thoroughly. Suiting up and dressing down takes a full hour, Corley says, so bathroom and lunch breaks are scheduled carefully around lab time. And no one reaches BSL-4 without having successfully practiced this drill at least five times at NEIDL’s in-house training facility.

All scrubs, trash, and liquid waste is disinfected or decontaminated by researchers before being dumped. “Housekeeping doesn’t come in,” Corley jokes, and nothing goes out unless it is clean.

“All biosafety is really about keeping the worker safe,” he says. And a safe worker means a safe community.

Corley and Murphy acknowledge that accidents have happened at Boston biosafety labs, including a 2007 evacuation of a BU BSL-3 lab where scientists were working on the virus that causes rabbit fever. But they are convinced that a well-trained staff and an engrained culture of safety can prevent such accidents.

The Medical Campus, they say, is an excellent location for NEIDL, despite its surrounding population. It offers a hub for power and steam sources for sterilizing scrubs and equipment and has well-trained first responders. And a medical campus is a great place to train the next generation of researchers.

“You’re not going to recruit the best minds out in the middle of nowhere,” Murphy says.

And Corley, for one, is confident that when it comes to recruiting expertise, NEIDL will be a very big draw: “We expect to outcompete every facility,” he says. “We expect to get the very best people.”

There are 2 comments on NEIDL Goes Public