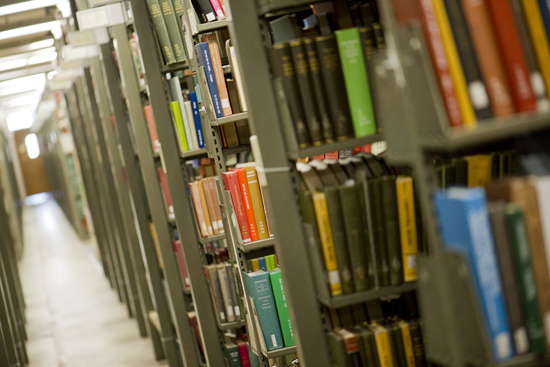 Stacks of books have vanished at BU’s libraries as printed works have gone online. Photo by Kalman Zabarsky

After the Dewey decimal system, the books-to-bytes formula may be the most important set of numbers for modern libraries. The rule of thumb, according to University librarian Robert Hudson, is that every 10 tomes transferred from print to digitization frees up one square foot of shelf space. At that rate, the Internet Age has been the bibliophile’s equivalent of urban renewal at BU.

Mugar Memorial Library has cleared out 200,000 books in recent years and warehoused them off site, gaining 20,000 square feet. (Some are still not digitized and can be overnighted to campus for a borrower, Hudson says.) Mugar has access to 230,000 more books that can be read online, saving another 25,000 square feet. A similar dynamic has cleared away printed scholarly journals, 16,000 of which filled Mugar when Hudson came to BU during the Carter administration. Today, “we have 46,000 electronic journals and only 4,000 in paper,” he says. (The library’s seven floors hold a total of 2.2 million books, journals, and microforms.)

The recent announcement that the Encyclopedia Britannica is eliminating its 244-year-old print edition for an online-only version frazzled traditionalists fearing the extinction of the book. But while all BU libraries, from Mugar to the three Hudson doesn’t oversee (at the Schools of Medicine, Law, and Theology), are traveling the digital route, their librarians insist that all books won’t shrink to fit on a microchip, at least in the lifetime of most of us.

For one thing, there are some things that only masochists might peruse on computer. “The primary title on copyright law is 11 large volumes,” says Marlene Alderman, director of LAW’s Pappas Law Library and an associate professor of law. “Does everyone want to read that digitally?” Amy Limpitlaw, head librarian at the STH library, says one professor at the school recently confided that in general she prefers reading print to online. Copyright law also is helping preserve the printed word, Limpitlaw says: it mandates the permission of a copyright holder before any book published after 1923 can be digitized, so that “much of our collection is not eligible to be converted to digital format even if we wanted to.” Many theology books remain print-only, or if they are e-books, may be available only by subscription and aren’t for sale to libraries, she says.

In a recent ode to the e-book, New York Times blogger Timothy Egan cited a report showing that e-book readers also enjoy a dip into print books now and then. Meanwhile, libraries still need space, even if it’s not for books. During the decades when Mugar acquired books only, Hudson says, “what we had been doing is building more book stacks and taking away seating.” Digitization reversed that, allowing “us to take some of the stacks down and start rebuilding student use space—computers, but also carrels, group interactive spaces, classrooms.” In short, “we’re more than books” and need student work space.

“You live in Warren Towers, there’s noise, roommates, things like that,” all of which distract a would-be studier, Hudson says.

On balance, librarians give thumbs-up to the online migration of matter. “What’s not to love?” says Alderman, whose library has removed 25,000 volumes from its shelves. “Digital materials can be accessed wherever the researcher chooses to work, eliminating a trip to the library and the need to carry around heavy law books.” Pappas was out of shelf space, she says, so the cavalry of digitization rode to the rescue, freeing up room for either as-yet-undigitized print material or specialty collections from elsewhere at LAW.

MED’s Alumni Medical Library has put all but 20 scholarly journals online in the last four years and is buying electronic journal archives and expanding its e-book holdings, according to director Mary Blanchard. As at Mugar, student study and learning space has commensurately blossomed. “Our e-resources are licensed for remote access 24/7,” she says—crucial support for students completing off-campus clinical training and other studies.

STH’s library is looking to hire a digital projects manager to help plan which material to keep online, according to Limpitlaw. (The library previously digitized 1,000 or more rare books and material from its locked research collection, but those books remain in the library, she says.)

BU’s and other libraries aren’t driving the move to digitization. “In a lot of cases, the journals faculty are publishing in now are only digital,” says Hudson. BU subscribes to JSTOR, a nonprofit digital archive of scholarly journals, allowing the University to warehouse paper copies of journals off campus. But this brave new world raises new questions, such as who owns digital articles and books; Hudson says he advises faculty to retain copyright to their papers rather than cede them to the publisher.

Then there is the tendency of computers to obsolesce quickly. “In my desk, I’ve got floppy disks with budgets and memos that can’t be read anymore,” from 10 years back, Hudson says, “either because they’ve deteriorated or the machine that read them isn’t around or the program that could read them has been updated. I think it’s a very real problem.”

Mugar on a Microchip?

There are 5 comments on Mugar on a Microchip?