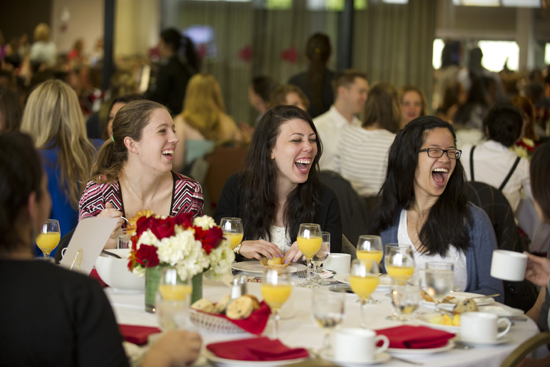 University President Robert A. Brown made the announcement at the Class of 2012 Senior Breakfast at the George Sherman Union’s Metcalf Ballroom, where a record-breaking 2,100 students gathered this morning. Seniors gave a collective gasp, absorbed the information, and then burst into applause in appreciation of the University’s choice.

“Your education at BU is the confluence of your hard work and the influence of the professors who taught you,” Brown told the graduates before announcing the winners of the University’s highest teaching honors. Andrew Duffy, a College of Arts & Sciences master lecturer in physics, will receive the Metcalf Cup and Prize for Excellence in Teaching. Two other faculty members will receive a Metcalf Award for Excellence in Teaching: Robert C. Lowe, a School of Medicine associate professor of gastroenterology, and Marisa Milanese, a CAS senior lecturer in the writing program.

“No matter how you slice it,” Brown said, “you’re completing a college education, and you’re doing it at a very good university.”

Schmidt, 57, was Google’s chief executive officer from 2001 to 2011, when he handed the reins back to Larry Page, who cofounded the company with Sergey Brin in 1998. As CEO, Schmidt oversaw the company’s technical and business strategy, helping grow the company from a Silicon Valley start-up to a global household name with nearly 30,000 employees.

A Virginia native, Schmidt has a bachelor’s degree in electrical engineering from Princeton University and a master’s degree and a doctorate in computer science from the University of California, Berkeley. Prior to his time at Google, he was chairman and CEO of Novell and chief technology officer at Sun Microsystems, Inc. He also worked on the research staff at Xerox Palo Alto Research Center (PARC), Bell Laboratories, and Zilog.

Augustine, a Colorado native and another Princeton graduate, is an aeronautical engineer by training; his successful career has straddled both the private and the public worlds. He has worked for such companies as Douglas Aircraft Company, LTV Missiles and Space Company, Martin Marietta Corporation, and Lockheed Martin, retiring as chairman and CEO in 1997. He has also served in the federal government, as the assistant director of defense research and engineering in the Office of the Secretary of Defense and as assistant secretary of the Army, Under Secretary of the Army, and Acting Secretary of the Army. And for 16 years he was on the President’s Council of Advisors on Science and Technology under both Democratic and Republican presidents.

Kelley joined the U.S. Navy after graduating from the College of the Holy Cross in 1960. The Boston native was awarded the Medal of Honor for his bravery and leadership during a Vietnam War battle, where he lost an eye, but saved his men from certain death. After retiring from the Navy in 1990 as a captain, he worked for the U.S. Department of Defense and then as commissioner and secretary of the Massachusetts Department of Veterans’ Services.

Lynch, a 1971 School of Law graduate, has served as the chief judge of the United States Court of Appeals for the First Circuit since 2008. She was first appointed to the court by President Bill Clinton in 1995, the first woman to break that barrier. She also was the first female law clerk in the U.S. District Court for Rhode Island and the first to be the head of the litigation department in the Boston law firm Foley, Hoag and Eliot. At the state level, she served as Massachusetts assistant attorney general and general counsel to the state’s Department of Education. The New York Times once reported that her opinions were among the most cited federal court of appeals decisions.

Boston native Nimoy is best known for playing the Vulcan science officer Mr. Spock in the television series Star Trek, a role for which he received three Emmy nominations. But the son of Russian Jewish immigrants has many more television, stage, and film accolades. He directed films like Three Men and a Baby and The Good Mother. He has starred on Broadway in Equus and Full Circle. And he received his fourth Emmy nomination for his appearance in A Woman Called Golda. He also is a fine art photographer whose work has appeared in private collections, galleries, and museums throughout the country.

The Class Gift campaign this year was successful, garnering more than 2,030 donations from seniors. So after the announcements, Dean of Students Elmore (SED’87) bounded onstage in a Red Sox jersey and asked Brown to pick a lucky senior’s name from a gigantic glass goblet, honoring this year’s incentive encouraging seniors to donate. The president dug his hand deep into the sea of paper slips and came up with Class Gift donor Dylan M. Moir (COM’12), who will throw out the first pitch at the Red Sox home game against the Seattle Mariners on May 15, accompanied by Rhett.

Then Brown left the Class of 2012 with this poem:

Every morning in Africa a gazelle wakes up.
It knows it must outrun the fastest lion or it will
will be killed.

Every morning in Africa a lion wakes up.
It knows it must outrun the slowest gazelle
or it will starve.

It doesn’t matter whether you’re a lion or a
gazelle, when the sun comes up, you’d
better be running.

There are 23 comments on Google’s Schmidt Is Commencement Speaker