People in other countries have risked their lives to achieve the freedoms Americans take for granted, and sometimes ignore. Can you handle something as simple as voting and speaking your mind to make your country better?

Sandra L. Lynch (LAW’71) laid that challenge before graduating seniors in her Baccalaureate address at Marsh Chapel Sunday, exhorting them to reject what she called the era’s prevalent cynicism. Lynch, chief judge for the U.S Court of Appeals for the First Circuit, spoke as someone who has extended her gender’s freedoms: she was the first woman jurist on her court and in several legal posts before that. She also spoke as someone who has practiced what she preached, describing how she was teargassed and cursed during protest marches for civil rights and against the Vietnam War.

“Some say they have no faith in government to address problems,” Lynch told the near-capacity crowd, which was sprinkled with scarlet-robed graduating students. “It would be reasonable for you to ask whether the fact that our democracy has not failed us in the past is any assurance at all that it will lead you to solve the problems that we face. My response is that our democratic form of government and the tools the Constitution gives you provide some of the best ways you have of addressing those problems.

“If you do not use those tools, including your right to vote, to speak, to organize in order to assure government will be honest, responsive, and relevant, the chances of your coming to solutions are considerably less,” she continued. “We give into your hands the safekeeping of our Constitution and our democracy. Please, we ask you, keep them safe and flourishing.” 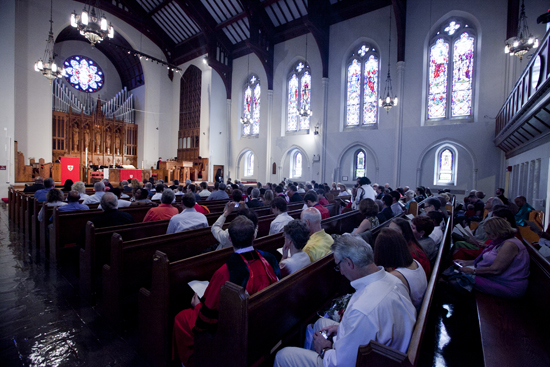 Lynch fortified her call to civic participation by quoting one of BU’s most famous graduates—“There is nothing in the world greater than freedom,” said Martin Luther King, Jr. (GRS’55, Hon.’59)—and by citing a chapter from BU’s history. In 1967, she recalled, activist Bill Baird gave a lecture on birth control before 2,500 BU students. He had arranged beforehand to give contraceptive foam to an unwed 19-year-old student. That act violated a Massachusetts law against giving contraception to unmarried people, which Baird and the young woman wanted to challenge. Following his arrest, the court on which Lynch would later serve ruled the law unconstitutional, and the U.S. Supreme Court followed suit in 1972.

Baird’s student partner and her peers attending the lecture “wanted to change an unjust law and to expand the protection of individual freedoms,” Lynch said.

Lynch’s career includes numerous examples of her work for the responsive government she exhorted graduates to bring about. For example, her dissent from a court ruling that rape didn’t meet the legal definition of serious bodily harm prodded Congress to amend the law in 1996.

Her speech was part of Marsh’s regular Sunday service, a ritual that always mixes thanksgiving with prayers for the needy. Robert Hill, dean of Marsh Chapel, acknowledged the service’s joyful celebration of graduates and its mourning the deaths of four BU students this semester, three in a New Zealand van accident and one in an Allston shooting. Quoting scripture, Hill said, “We have learned to rejoice with those who rejoice and to weep with those who weep.”

Later on Sunday, Lynch, one of five 2012 honorary degree recipients, was given an honorary Doctor of Laws at the University’s 139th Commencement.

There are 4 comments on Baccalaureate Speaker’s Plea: Vote, Speak Out, Organize